A Grade I Listed Building in Sutton, Cambridgeshire 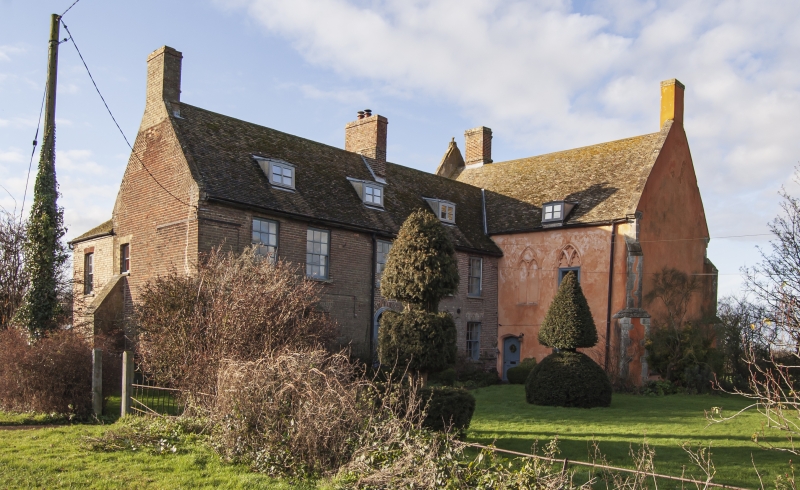 House. Incorporates late C13 - early C14 chapel of former monastic grange,
south wing built in 1742. Chapel. Rubble and fieldstone walls with original
Barnack limestone dressings. The walls have been cement rendered except for
some of the dressings. The plinth is not visible. Roof rebuilt C17, plain
tiled, but retaining C13-C14 parapet gable ends on original kneelers of
moulded stone. The west gable has the base of a gable cross. Chimney stack
inserted towards the west end of the chapel, and another at the east gable
end. Both of red brick, with that at the east gable rebuilt above the ridge
and that at the west having a moulded brick string. The chapel with the wing
on the south side form an L-plan. The chapel has an undercroft and an attic
storey was inserted in post medieval period. The north west, north east and
south east corners each have two stage diagonal buttressing with Barnack
limestone dressings and original gable offsets with stone coping to the first
stage. At west end a three-light C13 window now blocked, with intersecting
tracery in two centred arch. At ground floor a small quatrefoil window now
internal to the undercroft is probably original. The north wall has two
original first floor windows. Externally both have original dressed limestone
surrounds in two centred arches. The one to the west has had the tracery
replaced externally. The one to the east has two cinquefoil lights in two
centred arch with dagger tracery to the spandrel. There are three windows to
the undercroft on the north side. They are all post medieval but may be on
the site of original openings. The centre of the east gable end was rebuilt
in red brick when the stack was inserted. The south wall has two windows to
the chapel. One to the west is blocked and is only visible internally. That
to the east has original surround and a square head externally. The
undercroft has a modern doorway opening in arched head with rendered surround.
In the medieval period there was a domestic wing on the south side of the
chapel. Its site is now occupied by the wing built in 1742. Red brick,
Flemish bond, with plain tiled roof and tumbled south end parapets on
kneelers. Ridge and end stack. Two storeys and attic. Three modern dormers.
East elevation has symmetrical facade of five first floor recessed twelve pane
hung sashes. Central doorway in round headed arch with panelled door and
lobed glazing bars to the fanlight. Dated brick to front wall. Interior:
The chapel undercroft has a deeply chamfered main beam which is possibly
contemporary with the inserted brickwork of the stack. There is no evidence
of vaulting. The original access to the chapel is not certain. It is
believed to have been by a newel staircase in the south west corner. No
evidence of a medieval staircase remains. However at first floor in the south
west corner there is the early C18 balustrade of a landing which possibly
confirms this theory. This balustrade has a square newel, toads back rail and
column balusters. In the south wall at the east end is the double piscina.
Each bay has trefoil cusping to ogee arch in two centred arch. Mask head to
spandrel. Two octofoil drains. Two windows in south wall. One to the east
has chamfered rear arch but no tracery. The one to the west has a deeper
splay similar to that of the windows to the north and west wall in chamfered
two centred arch. Two trefoil lights in two centred arch with geometric
tracery of a quatrefoil in a circle to the spandrel. The walls between the
chapel and the 1742 wing at first floor has been partially removed. The east
wall of the chapel has part of a fragment of moulded stone possibly of a
figure. The upper part is reset. It may form part of a reredos. In the
north wall the deeply splayed and two centred chamfered arch of both windows
is visible. The tracery of that to the west is visible from the interior.
Two lights in two centred arch with Y-tracery. In the attic the heads of the
arches of the windows in the north wall and the blocked west window can be
seen. The side purlin roof has paired wind bracing. One tie beam is hollow
and roll moulded and may have been reused from the original roof. The 1742
wing has a six flight closed string staircase of 1742. Square newels with
toads back rail and column-on-vase balusters. Burystead Manor was given to
the prior and convent of Ely after the Danish invasions. After the
Dissolution in 1541 it was transferred to the Dean and Chapter. It is now
owned by their successors the Church Commissioners. During the C14 it was
kept in hand by the prior and convent. Other than the various estates round
Ely it was considered the most valuable part of their property. In the early
C18 it was leased to the Ward family who may have built the 1742 south wing.