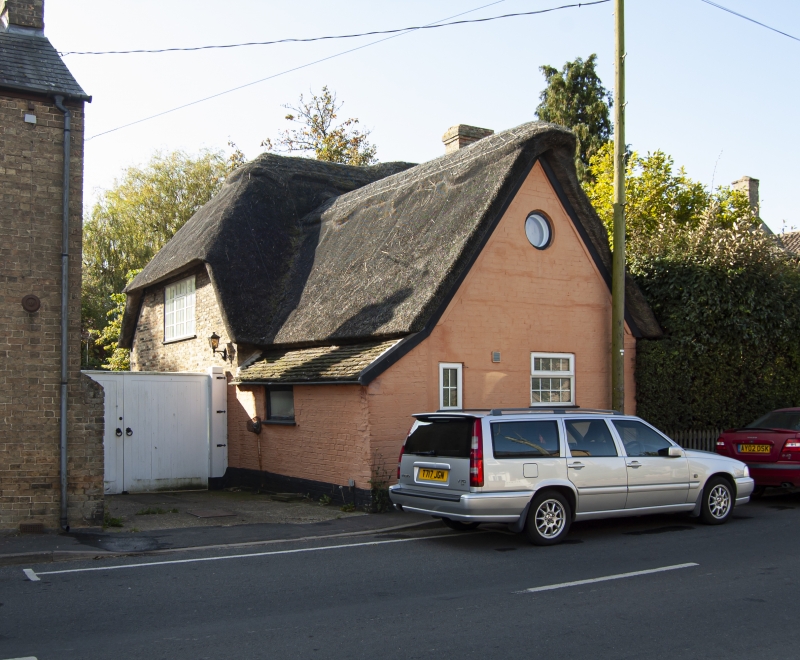 A timber-framed building, now a cottage known as The Trees, built in the late-C15, with later alterations. The fragmentary remains of a late-C15 barn standing c42m to the south of the cottage is not included in the listing.

A timber-framed building, now a cottage, along with the remains of a barn, both built in the late-C15, with later alterations.

MATERIALS: the cottage has a brick encased timber frame, the front elevation painted, with brick stacks and a Norfolk reed thatched roof with a patterned block ridge. The remains of the barn are of brick.

PLAN: the cottage is L-shaped on plan, aligned east to west, with a cross-wing projecting at the left-hand side. Standing circa 45m to the south-west of the rear elevation are the ruined remains of a former barn.

EXTERIOR: the cottage is of one-and-a-half storeys with its principal elevation facing north across Main Street. At the right-hand side of the ground floor there is a C20 open porch with timber posts and clay-tile roof to a C20 doorway with wooden panelled door. To its left is a bricked-up doorway and to the left again is a cambered-headed window opening with a skewback arch and C20 casement window with small-paned glazing. A lintel above the arch suggests that this opening has been formed from an earlier window or door opening. Situated immediately to its left-hand side is the bricked-up doorway to the former C17 lobby entry, also with a large lintel. Left again is a cambered-headed window opening with a C20 casement window with small-paned glazing. The east wall of the projecting cross wing has a soldier-arched window opening with a late-C20 uPVC casement with small-paned glazing. The gable end of the cross-wing has two window openings to the ground floor, both with late-C20 uPVC casements, and an oculus to the apex of the gable. The attic storey has three two gabled dormers with barge boards, thatched hoods and late-C20 uPVC casements with small-paned glazing. Adjoining the cross-wing's left-hand return is a lean-to addition with a clay-tiled rood. Behind, the return wall of the cottage is of C20 brick with a casement beneath a swept gable. The right-hand return is of late-C20 brick with a stone-coped gable rising to a rebuilt brick stack.

At the rear there is a C20 porch at the left-hand side, with a group of three windows of various sizes to its left-hand side. Immediately left is a late-C20 bowed window of uPVC and to the left again is an early-C21 open porch to a half-glazed door. Above, the attic storey is weatherboarded with three eyebrow dormers with thatched hoods and casement windows, that to the centre being a late-C20 uPVC replacement.

INTERIOR: the sitting room has a late-C16 stop-chamfered ceiling beam with apotropaic marks and mainly replacement floor joists. At the east end is the west face of the C17 back-to-back fireplace of which the right-hand side was rebuilt in the early-C21. It is of brick with a large, stop-chamfered wooden bressummer with candle holes and apotropaic marks. On both sides are pointed niches with wooden inglenook seats. On the right-hand side of the fireplace there is a doorway leading to the dining room while a passage to the left-hand side has doorways off it to the dining room and a kitchen at the east end. All doors and door frames are C20. The dining room has the east face of the back-to-back fireplace over which is an exposed floor frame. To the ceiling there is a large chamfered beam of C17 date that extends through to the kitchen where it is supported by a large timber post. The attic storey is now subdivided into separate rooms and is predominantly modern in appearance. It has a late-C15 side purlin roof structure which is largely intact. Now ceiled over, it is of eight bays with chamfered purlins and smoke blackened timbers throughout, with the exception of some later repairs. At the east end is a possible smoke vent.

Standing in a former medieval enclosure on the south side of Main Street, Little Downham, is a timber-framed building now known as The Trees. Although its precise origins are unknown, research undertaken in 2005 (see SOURCES) suggests that it was built in the late C15 and has an association with Downham's episcopal palace of the Bishops of Ely. The Manor of Downham had always formed part of the demesne of Ely and it was subsequently allocated to the bishop following the foundation of the diocese in 1109. With Downham's palace being less than three miles from Ely Cathedral it became a highly favoured residence and was substantially rebuilt by Bishop John Alcock when he held the see from 1486 to 1500. Alcock, together with William Waynflete of Winchester (d1486), John Morton of Ely and Canterbury (d1500), and Thomas Rotherham of Lincoln and York (d1500), was one of a quartet of late-C15 bishop builders in the south and east of England who worked mainly, though not exclusively, in brick. However, as The Trees bears no similarities in terms of its materials to the remodelled palace, namely deep red brick with blue brick diapering in diamond patterns, this may suggest it was built by one of Alcock's late-C15 predecessors, possibly Bishop William Grey or Bishop John Morton, who held the see from 1454-1478 and 1479-1486 respectively. Also built in the late C15 was a large barn (not of special interest) whose fragmentary remains stand c42m to the south of the cottage. Although only the west gable wall now survives, of which the gable itself is also missing, it does display a striking similarity to Alcock's rebuilt palace. While the original function of The Trees is unknown, the early-C21 research and surviving structural fabric suggest that it probably originated as an open hall house. The enclosure that it stood in originally extended further south to the boundary formed by the current Cannon Street. It was probably enclosed by a brick wall and had two gated entrances, one at the north end to the street and another at the south side, to the fen edge.

In the late-C16 a floor was inserted creating an upper room at the west end of the timber-framed building, along with back to back fireplaces and a brick stack. During the C17 it was transformed into a lobby entry house with the remainder of the building being floored, the fireplace rebuilt and the timber frame encased in brick. The demolition of the barn and enclosure walls also probably began at some point during the same century. In the late C17 or C18 a small shop or workshop was added to the east end of the front elevation. From the C18 onwards the cottage evolved as a dwelling with both floors being subdivided to create separate rooms while new window and door openings were inserted in the external walls. In the late C20 minor alterations were undertaken both internally and externally, including the installation of replacement uPVC windows.

The Trees, a cottage with late-C15 origins, and later alterations and additions, is listed at Grade II for the following principal reasons:

* Architectural interest: as a former late-medieval hall house with evidence for its evolution adding to its interest;

* Survival of historic fabric: it retains a significant proportion of historic fabric, including an intact roof structure of late-C15 date whose smoke-blackened timbers are a vivid reminder of past heating technology and the house's origins as an open hall house;

* Historical interest: for its association with the episcopal palace of the Bishops' of Ely.