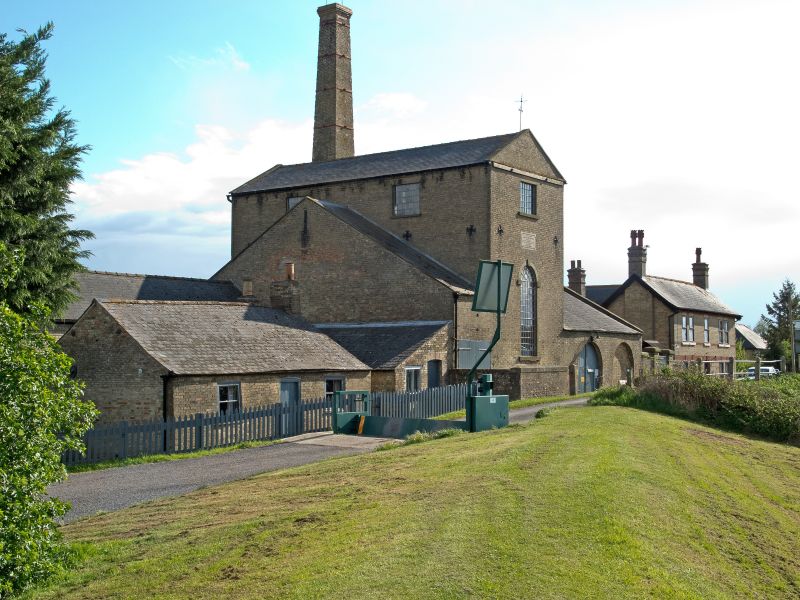 Engine House. 1831 Gault brick, Flemish bond with slate roofs. In three
parts. Engine house lying between the boilerhouse and scoopwheel house.
Engine house of two storeys and loft. North gable has fixed metal frame
casement a stone panel incised with the date and the names of the drainage
commissioners and a tall similar fixed light window in round headed arch. The
boiler house has a lean-to roof and is of one storey with a tall, tapering
square stack on south side. In the north end are two cartway openings in
round headed arches, one now blocked. The scoop wheel house is also of one
storey. Interior: The interior is very intact and in near working order.
The low pressure beam engine is by Butterley and Co, installed 1831 modified 1909, the
boilerhouse has three Lancashire boilers replacing the first wagon boilers and
the scoopwheel is in situ. There is a band of original pattern anthemion
stencilled to the wall at dado height. This paintwork is original in the
loft, but repainted elsewhere. In a small brick built structure behind the
stokers cottage and semi-detached to the scoop-wheel house is a 200 hp Mirlees
diesel installed 1925, with Gwynnes pump. An Act of parliament was passed in
1741 for the drainage of Waterbeach level. The water was pumped from the fen
to the Old West River. Scheduled as an Ancient Monument County No 60.