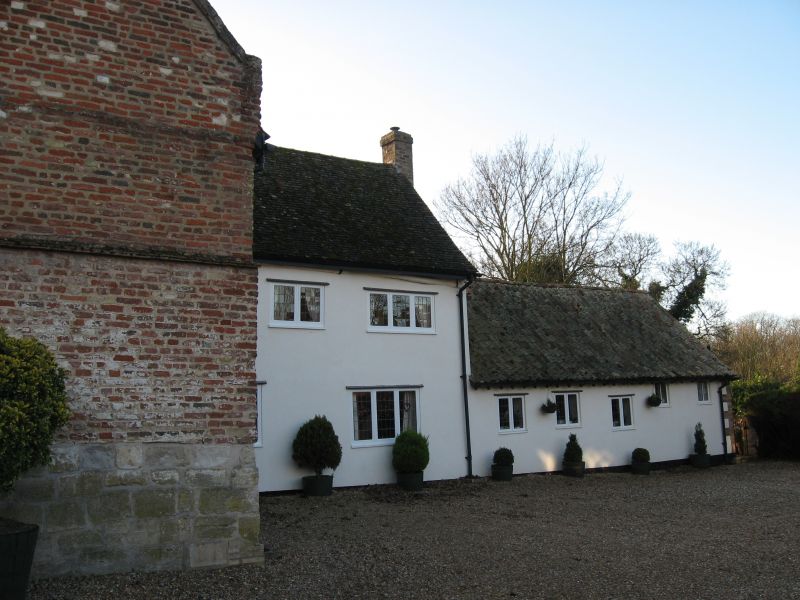 House originally a C14 open-hall of which one bay and parts of
two other bays survive. Parlour wing of four bays, added c1500
with gable end to road. This gable end was remodelled in early
C18. The house has recently (1983) been restored and all the
external features are of that date. The open-hall C14, is
timber-framed, rendered with steeply pitched, tiled roof. The
gable end, parapetted, was rebuilt in C17, of red brick and the
open hall shortened. Two storeys. All the features on the
exterior are of C20. Parlour wing, c1500, also timber-framed
with gable end cased in gault brick, C18. Tiled roof with end
stacks. Four bays and two storeys. Adjoining to the West is a
single storey service range, C19 and of clunch. Inside. In the
former open-hall the tie-beam of the display truss has been
removed but the mortices for the arch braces are still visible
in the principal posts. There is a partition wall between the
hall and another bay now incorporated in the c1500 range which
has a central post and curved downward bracing at both ground
and first floor levels. The roof would have been of crown-post
construction. The crown-post has been removed, but the sooted
rafters with their collars have survived. They are laid flat.
The closed truss in the roof is sooted on the hall side only.
Part of the rafters from this roof continue to the South
suggesting an additional bay to the C14 house. The original
hall window has survived and is of three arched lights in a
square head with hollow chamfered mullions. The principal posts
to the display truss also have similar hollow moulding. Each
wall plate has a squint butted scarf joint with secret bridge
and single edge peg. The parlour wing, c1500, is in four bays.
The tie beams have arch bracing and the roof is of crown-post
construction. The floors are of c1500 but the first floor was
open to the roof. There are three crown-posts remaining. One
over the first and second bay closest to the road has an
octagonal post with four curved braces to the collar and collar
purlin. The other two are plain and have bracing only to the
collar purlin. There is no smoke blackening. The framed
partition walls are extended to the roof between the second and
third, and third and fourth bays.