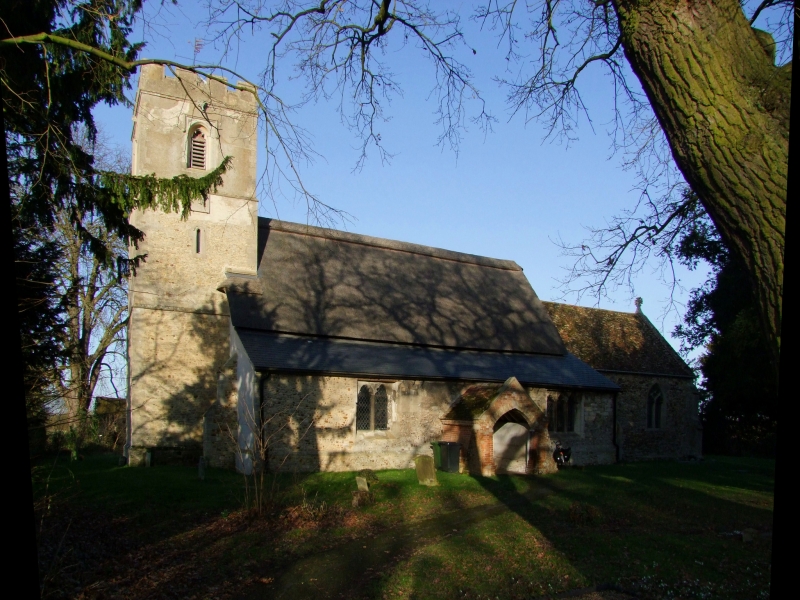 Parish Church C12, C14 and C15. C19 and C20 restorations.
Puddingstone and limestone rubble with some fieldstone and
limestone and clunch dressings. Red brick south porch. Reed
thatched roof to nave, slate to South aisle and tiles to
chancel. Plan of West tower, nave South aisle, South porch and
chancel. West tower is probably C15, but the pointed lancets
suggest a possible earlier date. Mostly limestone rubble with
dressed limestone to the quoins. Three stages on chamfered
plinth, embattled parapet. West window of clunch, repaired with
Ketton, hollow moulded two cinquefoil lights in two centred
arch. Lancet to each side of second stage. The clunch
openings, with cinquefoil heads to each side of bell stage are
very badly worn. Beast gargoyle masks to centre of each side of
main cornice. In the C14 the South aisle was added to the nave
and the North wall was refenestrated. The North wall of the
nave is mainly sandstone rubble and probably C12. There is an
arch, C12, to a window, now blocked, in this wall. The South
aisle, like the rest of the wall material, has been repointed.
There are some re-used moulded stones amongst the limestone
rubble and fieldstone. The two and three-light windows are of
clunch repaired in Ketton. South porch, C18 red brick, with
moulded outer arch. Gabled roof, tiled. Inner arch, C16, four
centred with vacant niche above, part obscured by porch.
Chancel C14, South wall has a later two stage buttress to the
chancel arch, part concealing the stop of one of the South wall
windows. Two C14 windows of two lights with reticulated
tracery. One window has a low side opening square. South
doorway in a two centred pointed arch. The East wall has a
c.1924 window of five lights, with reticulated tracery. Above
it in the gable end are shafts re-used and may date from the
original C14 rebuild or may have been incorporated in 1924 when
the window was renewed. Interior: The West tower arch is
typical perpendicular work with two centred ogee moulded arch on
a high base. South arcade in four bays. Two centred double
hollow moulded orders the outer with broach stops on octagonal
columns, capitals and bases. The roof was rebuilt, probably in
C19. The chancel arch is C12 with three attached shafts with
scallop capitals, abacus and moulded bases. The arch itself is
C14 however. Two centred, double chamfered, with broach stops.
There is a double piscina in the South wall of the chancel. Two
quatrefoil drains in two centred arch with cinquefoil cusping to
head. In the North wall of the chancel, a wall tomb, C14, with
running foliate ornament to ogee arch, with effigy of a de
L'Isle. The communion rail with its vase shaped balusters is
early C18. The pulpit is early C17, six sided with original
tester, but the stem and base are C19 - C20. The East wall of
the chancel has fragments of pre:Conquest coffin slabs carved
with interlace work reset in the wall. The North wall of the
nave also has two Saxon tomb slabs, and some wall painting
probably of several dates, but the earlier with vine leaf
tendrils and a figure of St. Christopher, C15. The font is
C12. Limestone, round basin on octagonal stem.
R.C.H.M. record card
Pevsner. Buildings of England p.451