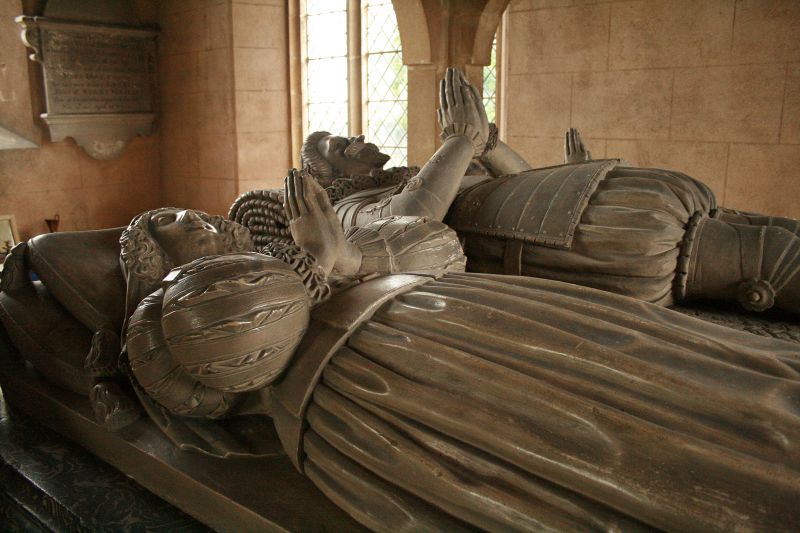 Church of England Parish: Castor with Upton and Stibbington and Water Newton

1.
5141 UPTON
Church of St John
The Baptist
TF 10 SW 10/672 15.12.55
I
2.
C12 but largely rebuilt in C17 Gothic, and with chancel of 1842. Nave and
north chapel have triple gable to west end, the small centre gable has louvred
bell-openings and there is a central buttress with set-offs. Round-arched doorway
impost dated "WC(D) 1767" at west end of nave, and 2 large straight-headed
west windows with 4 round-headed lights. The north and south windows are
similar but of 3-lights. Chancel, rebuilt in 1842, has straight-headed south
window with 2 ogee arched lights.
Interior: chancel arch has early C12 shafts with scalloped capitals and C17
round arch. Two bay, late C12, north arcade with circular pier and capital
with leaves and crockets, and C17 arches.
The north aisle was rebuilt to receive the monument to Sir William Dove, 1633,
and his 2 wives. He was lord of the manor and son of the Bishop of Peterborough.
North aisle has raised floor with large stone balustrade to arcade and steps
with panelled newels with ball finials. The monument has 4 columns supporting
open segmental pediments, and with 3 recumbent effigies, his second wife in
wood, 1667.
C17 communion rail with pierced balusters. C17 polygonal pulpit in corner
with tester and decorated arched panelled sides. C15 octagonal font with
C17 cover.
Built of dressed stone and ashlar with Collyweston stone and slate roofs.
VCH Northants Vol II.