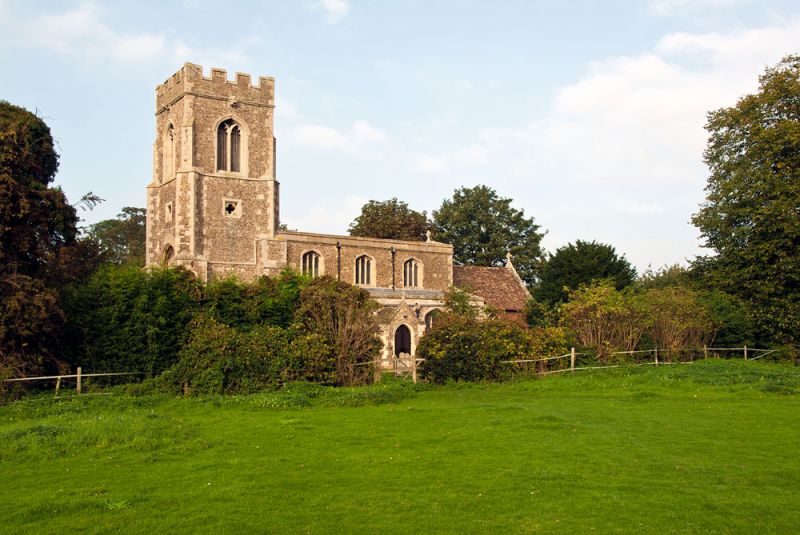 The North and South arcades, and the chancel arch remain of the
C13 church which was added to and altered in C15 and C16. In
1726 the chancel was rebuilt. The South porch is C19. C15
West tower of pebblestone and Barnack dressings. Three stages
with embattled parapet, diagonal buttressing and splayed
plinth. C16 newel staircase turret of brick at South West
angle. Beast gargoyles to centre of each side of main cornice.
C15 doorway, West window and two light bell chamber openings.
All with moulded labels and mask and beast stops. Small
quatrefoil openings to each wall of second stage. Parapetted
nave of pebblestone with Barnack stone dressings and gault brick
repairs. Each side of clerestorey has three windows, each of
three cinquefoil lights: Similar, larger windows in
South aisle. South porch dated 1851 on gable end. Pebblestone
with stone dressings. Chancel, dated 1726 on gable end. Red
brick with Barnack dressings. C19 plain tiled roof with end
parapet and eaves cornice. Two windows, each of two cinquefoil
lights to South wall. Interior: C15 tower arch. Two-centred
arch of two chamfered orders. The splayed responds have
attached shafts with half-octagonal capitals supporting
wave-moulded arch. C13 North arcade of three bays. Two centred
arches of two hollow-chamfered orders on cylindrical columns
with moulded bases and octagonal capitals. South arcade C13 and
also of three bays. Plain chamfered two centred arches on
octagonal columns and capitals. Octagonal bases and plinths.
The roof of the nave and South aisle are C16. In the South
aisle the wall plate is chamfered and stopped and the principal
rafters and longitudinal timbers moulded. The jackposts to the
principals are original. In the nave the tie beams are cambered
and are carried on original jackposts. The intermediate
principals have figures carved to soffits. The C13 chancel arch
is similar to the North arcade. The 1726 chancel was remodelled
internally in C19 but retains a mid-C18 communion rail. The
early C17 hexagonal pulpit has arcaded panelling in two tiers
but the steps, stem and plinth are modern. The lectern also
incorporates early C17 panels.
R.C.H.M. (Hunts), p186, mon.1
Pevsner (Buildings of England), p298