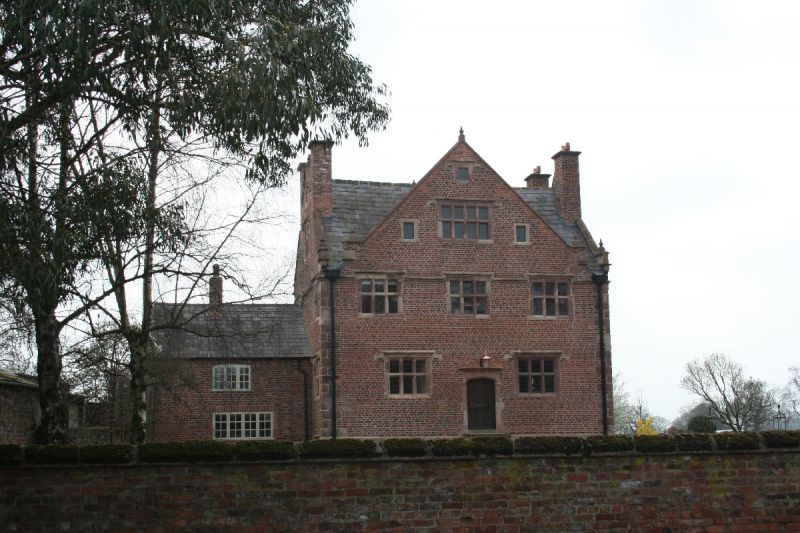 Hall: early C17 for John Worden, some small C19 additions. English
bond orange brick with buff sandstone dressings, Welsh slate roof and
4 gable stone capped brick chimneys. Square in plan. 3-storey over
basement, symmetrical 3-bay front. Chamfered stone plinth, flush
stone quoins, continuous label mould at 2nd floor. The front is under
a stone-coped and finialled triangular gable. Ground storey has a
chamfered 4-centred arched doorcase, approached by 10 stone steps, with
a flat hood mould containing a C19 oak panelled door. To either side
are 3-light rebated and chamfered mullioned and transomed windows with
label moulds, similar but unrebated windows in 1st floor and blocked
4-light window in the gable with single lights to either side and
above. Both sides have similar gables with similar windows including
mullioned windows in the plinth.
Interior: entry into small hall which contains late C17 dogleg oak
staircase with twisted balusters, square newels and heavy handrail. 4
rooms on each main storey, with room to left of entrance wainscotted
with cornice and wooden surround to a corner fireplace. Heavy, deeply
chamfered ceiling beams carried on moulded wooden post and corbel at
1st floor. 8-panelled doors with reeded rails at 1st floor.
Described by Webb in 1623 as "the fair and fine conceitedly built
house of brick". D King, The Vale Royall of England, London 1656.
The hall gives the impression of a tower house and belongs to the same
tradition as the Little Castle at Bolsover Castle, Derbyshire, but of a
smaller scale.