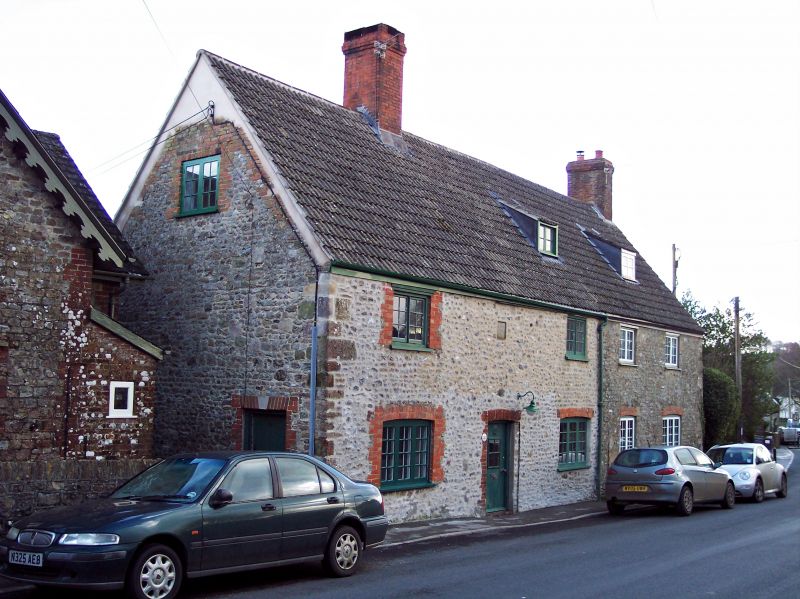 Pair of houses, formerly an inn. Dated 1660. Stone rubble with stone quoins and later red brick window arches and jambs. Interlocking concrete tile roof with gabled ends. Gable-end and axial stacks with brick shafts.
Plan: L-shaped on plan. 3-room plan front range with kitchen on right, south [now No.20] with large gable-end fireplace; the small central room and the left [N] room are heated from an axial stack with back-to-back fireplaces and a lobby entrance in front and winder stairs behind; a short unheated wing at the rear of the left end. C20 extension behind right-hand end.
Exterior: 2 storeys and attic. Asymmetrical 4-window west front. C20 2 and 3-light casements, those on right [No.20] are more recent plastic casements; red brick arches, left -hand with red brick jambs; doorway to left of centre with C20 plank door and stone tablet above inscribed "M over HW 1660". Rear, east, gable-ended wing on right and C20 extension on left.
Interior: No.21:Lobby entrance with ovolo moulded doorframe with high stops to right-hand room, which has large stone fireplace with chamfered jambs and cambered chamfered timber bressumer and niches inside, cross-beams with convex notched stops and axial headbeam at back with groove for screen. Right-hand room has similar but smaller fireplace and cross-beam with cyma notched stops. Rear wing has chamfered cross-beam with long cyma stops. Winder stairs with moulded risers and heavy balustrade at top with turned balusters and moulded rail. First floor has chamfered beams and chamfered doorframes with high stops and plank doors, doorway to left chamber has baluster grille above. Left chamber has ovolo moulded stone fireplace with cambered arch and wall painting [one of a series, the others covered] of demi-figure of a woman in costume of circa late C17 and holding a rose. Right chamber has chamfered stone fireplace. No.20 has chamfered cross-beam with cyma stops and large fireplace with cambered chamfered timber lintel with buried stops. Chamber above has chamfered ceiling beams with cyma stops and brick fireplace with chamfered cambered arch stone lintel. 2-bay roof survives over No.20 with morticed collar trusses and what appear to be threaded purlins. Roof over No.21 appears to have been replaced, but some of the structure might remain.