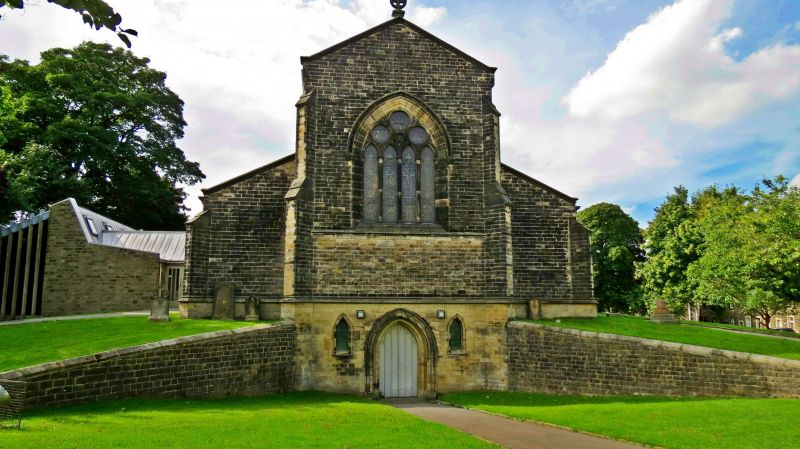 EXTERIOR: An ambitious church in simple Geometrical style. The 2-stage tower has diagonal buttresses rising to large corner pinnacles, and open arcaded parapet. Its west doorway has a single order of shafts, below a tall 3-light window and 2-light belfry openings with louvres. Nave, chancel and aisles have coped gables and are buttressed, including diagonal buttresses, and the chancel has arcaded eaves. The 6-bay nave has 2-light windows with Y-tracery, and the aisles taller 2-light windows with geometrical tracery. The 3-bay chancel also has a 2-light clerestorey windows and 4-light east window. Chancel aisles have Y-tracery north and south windows and, on the south side, a link to late C20 parish rooms. The entrance to the crypt is beneath the east window. It has a doorway with continuous moulding, flanked by lancet windows.

INTERIOR: The interior is especially impressive for its completeness. Nave arcades have octagonal piers and finely moulded arches, and the chancel arch is finely moulded on polygonal responds. There are plaster rib vaults in nave and aisles, springing from corbelled wall shafts in the arcade spandrels, and with foliage bosses. The chancel has a similar vault but richly painted with gilded bosses and stencilled decoration. The south chapel, created in the 1920s, has painted decoration by Sir Charles Nicholson, who might have been responsible for painting the chancel vault, since the church possesses a drawing, signed by him, showing the chancel-vault decoration. Walls are plastered and painted. The floor is stone-paved, except for raised floorboards below pews and black and white marble floor in the chancel. In the crypt, the western portion is aisled with 3-bay arcades on octagonal piers, under rib vaults, and the eastern section is divided into plainer cells off a central passageway.

PRINCIPAL FIXTURES: The font has a round bowl with arcaded stem, in C13 style. Benches have plain square ends with arcaded frontal. Most of the chancel furnishings date from refurbishment in 1905. This includes Arts-and-Crafts panelling in the north and south walls, incorporating a vine-trail frieze, and communion rail with intricate tracery panels. Choir stalls have ends with ball finials, arms rests and blind-tracery panels. The communion rails have intricate openwork tracery panels. The Gothic-panelled reredos is dated 1953, by Thompson of Kilburn. In the north aisle is a polished stone 1914-18 war memorial, with a central sculpture of Christ flanked by an engraved roll call. A pretty Arts-and-Crafts tile wall plaque is to Elizabeth Onions (d 1895). Stained glass windows are mostly of the late C19 and early C20, including a south aisle window by Burlison & Grylls. The east window is of 1945.

HISTORY: Parish church of 1837-39 by Robert Chantrell (1793-1872), architect of Leeds. Chantrell was a pupil of Sir John Soane and set up practice in Leeds in 1819. He built secular buildings in the Greek-Revival style and built several churches that received grants from the Church Commissioners. Parish rooms were added on the south side of the church c1982.

REASONS FOR DESIGNATION: Christ Church, Skipton, is designated at Grade II* for the following principal reasons:
* The church is a well-preserved and ambitious design of the 1830s that attempts a more archaeological approach to Gothic architecture than had hitherto been fashionable. It has an especially impressive vaulted interior and a vaulted crypt, an unusual feature for this period.
* The chancel is of special interest for its range of early-C20 fixtures, including panelling, choir stalls and communion rails, which are of a consistent quality; the painted decoration too is of note.