A Grade I Listed Building in Wentworth, Rotherham 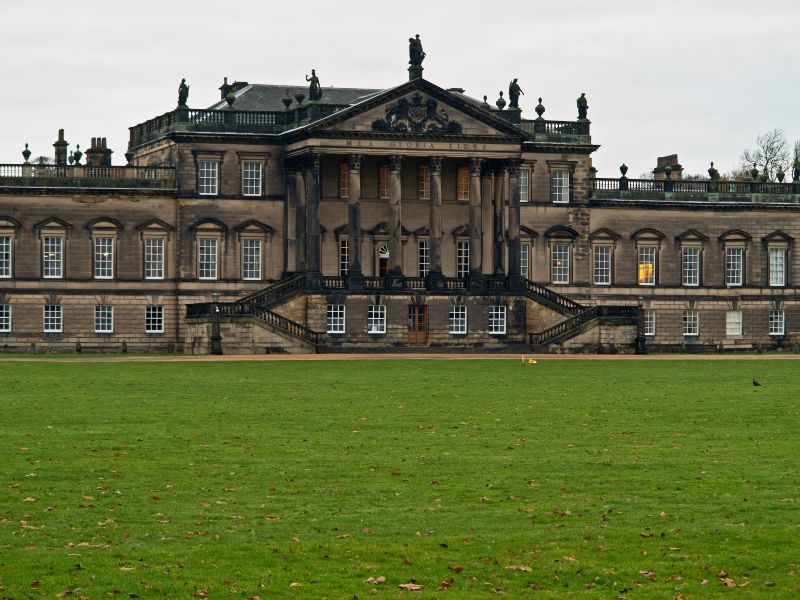 Interior: principal rooms of central block retain decorative schemes of
magnificent quality. Many rooms designed by Henry Flitcroft and executed
by the finest craftsmen of the day. Tuscan-pillared entrance hall with
Neo-Classical statues. Domestic suite to north: Painted Drawing Room with
walls stretched with canvasses by Auguste de Clermont; the Low Drawing
Room with coved niches carved in the manner of Grinling Gibbons. Chapel
with C17 carved entrance: box pews; Ionic columns to gallery; Venetian
west window. Imperial staircase by John Carr in Adam style. Marble
Saloon: scagiola columns, balcony, pilasters above; ceiling in Jonesian
style. Niches with mid C18 statuary; panels by James Stuart; overmantels
by John Gibson (1821). To the south a sumptuous suite of rooms with richly
gilded coffering to the ceiling of the Van Dyck Room and extravagant
stuccoed panels in Whistlejacket Room. Suite of rooms to north of Marble
Saloon of similar quality, 2 fireplaces by Fisher of York (1768).
Statuary Room: busts by Chantrey, Greek goddesses on pedestals attributed
to Nollekens. Rooms of west front with Rococo motifs notably doorheads in
entrance hall. Some rooms retained from the C17 house: Old Hall with
painted panelling and round-arched arcades. Other C17 rooms refitted:
Long Gallery, remodelled by Flitcroft, columned screen and sparing Rococo
decoration to ceiling. To the north a suite of rooms named Clifford's
Lodgings rebuilt by Carr c1762: room with pine panelling and marble
fireplace with multicoloured inlay. The whole decorative scheme and many
other features of note are described at length elsewhere.

Interesting appendages to main structure include bridge constructed from
the south pavilion to higher level gardens of west front and the small
octagonal kitchen to rear of north pavilion.