A Grade I Listed Building in City, Bradford 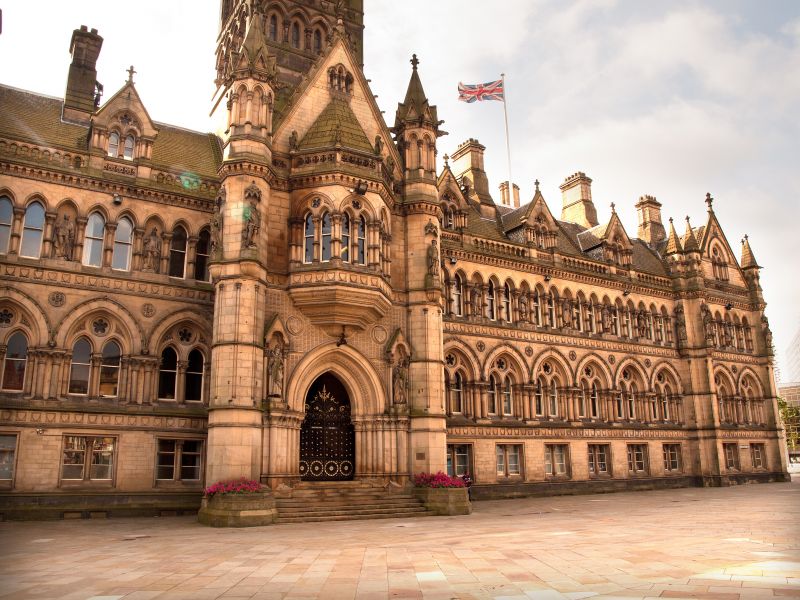 2.
Competition winning design of 1869 by Lockwood and Mawson, completed in 1873.
Extended in 1905-09 to the designs of Norman Shaw and executed by the city
architect F E P Edwards. Lockwood and Mawson's building, intended by the
city to compete with the Leeds and Halifax town halls, occupies a splayed
triangular site. The elevations of Gaisby rock sandstone, rising through
3-storeys and attic with steep pitched roofs, are treated in an early to mid C13
Gothic style, dominated by the 200 ft campanile tower of Tuscan derivation. The
original competition designs, considerably influenced by Burges and Scott, show
a bowed corner at the apex of the site but in execution this became a polygonal
terminal feature. Massive ashlar block ground floor and sandstone "brick" with
ashlar dressings to upper floors. The longest frontage is towards Tyrell Street.
Plain 2 light windows to ground floor. Tall first floor with 2 light shafted
windows under plate tracery with moulded arches, linking strings. The wall
surface of the spandrels was intended to have carved diaperwork pierced by
circular frames containing carved heads, similar to those on the Wool Exchange.
In execution these details were dispensed with except over the main entrance.
The top floor is treated as a continuous arcade articulated by statues of
kings and queens in canopied niches. Corbelled eaves surmounted by miniature
colonnade as parapet. Finialed gabled dormers and pinnacles rise above. The
centrepiece of the long north-east front has an elaborate oriel window set
above the portal. Here the quality of the carving is particularly apparent
in the multi-shafted jambs of the doorway and the framework of the arch. Fine
wrought iron gate of intricate scrollwork with ornate cresting. Broad flight
of steps leafing up into hall.
The extension of the Town Hall was proposed in 1902 and the then city
architect F E P Edwards approached Norman Shaw to advise on the design, having
already evolved the internal distribution. Shaw's express intention was that
the new and old work should give "the appearance of one complete building
under one roof". The council however did not approve the addition of attic
storeys to the original building, so that there remains a visual break in the
roof line. Shaw's elevations are a brilliant and witty amalgam of styles, and
features drawn from previous works in his career, yet respectful of Lockwood
and Mawson's. Gothic, Romanesque Gothic and Queen Anne with rococo ironwork,
rise one above the other, capped off by 2-storey gabled attics of French Gothic
derivation. The massive, gabled, south-west corner has a lofty mullioned hall
window lighting the dining hall and a corbelled spire capped turret inset between
the latter and the return. All this is built in fine quality ashlar, the south
link range being of sandstone "brick" above the ground floor. A finialed gabled
bay leads finally into the Lockwood and Mawson building. Of the interior, the
reception rooms and the dining hall with its high arched roof and sculpted
chimney piece are almost certainly due to Norman Shaw. The Council Chamber is
top lit on a Greek cross plan with Soanian arches and Gimson plasterwork,
William and Mary panelling, galleries on marble columns. The design here may
owe more to Edwards as building and interior fitting spans the period 1905-09.
The main entrance hall and staircase in Baroque marble were completed by
William Williamson in 1913-14. The Town Hall still dominates the centre of
Bradford with its campanile as a prominent landmark.