A Grade I Listed Building in Halifax, Calderdale 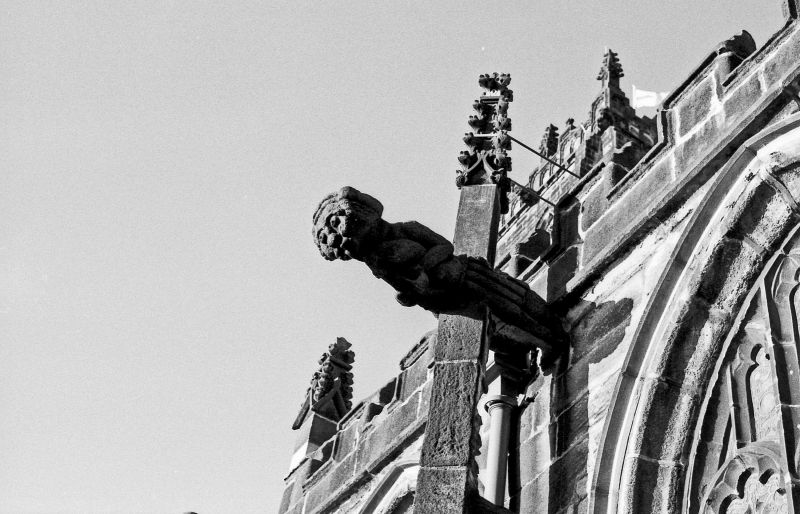 EXTERIOR: All roof lines apart from the north aisle of the nave have parapets, some crenellated and all with crocketed pinnacles. The west tower has four stages with stepped angle buttresses. The pointed west door has two weathered coats of arms above it, with a six-light Perpendicular traceried window above. The top stage has paired pointed openings with louvres on three sides with clock faces below.

The five-bay north aisle is partly formed out of the south wall of the previous church, with added buttresses. A small gabled porch with a shouldered arch door occupies the second bay from the west. The two windows to the left of this have Y tracery as has that to the right though this is set into later stonework and is larger. The left bay, also with later stonework, has a Perpendicular window.

The Rokeby Chapel is attached to the north side of the Chancel: it has large Perpendicular west and east windows and two bays also with Perpendicular windows and an additional rectangular window inserted beside the right hand original window with a small door below. The chancel aisle extends for three further bays beyond the Rokeby Chapel with windows similar to elsewhere in the building. The east end has angle buttresses to the aisles and gargoyles in the form of animals at the corners. A central window with Perpendicular tracery is flanked by stepped buttresses and a small square window near the ground. Similar, smaller windows are at the west end of each aisle, the left one with a small square window below and the right with a square headed doorway. On the south side the chancel has five bays, the two to the left not defined by a buttress but with a small doorway and rose window above. The five windows in the bays are similar but not identical, the central having a three-centred arch. The two right bays have square mullioned windows below and the centre bay has a pointed-arch doorway. The chancel has seven clerestorey windows on each side.

The Holdsworth Chapel on the south side of the nave has four bays and is in similar style. The upper parts of the buttresses are free-standing and attached to the wall by extravagantly carved gargoyles in the form of animals. The south porch, immediately adjacent to the chapel, is gabled with a pointed doorway, carved broad timber double doors and glass overlight. There is a single Perpendicular window to the left, and a run of pointed segmental windows above both the porch and the nave window.

INTERIOR: The nave has five bays. The arcade to the south and north aisles has broad pointed arches and a variety of piers, the first and fifth being considerably larger than the rest. Low box pews extend into the aisles on both sides, with a central stone-flagged passage and passages through each aisle. The pews have decorative carved ends adapted from the C17 originals. The nave ceiling is panelled and the aisles have lean-to timber ceilings with principal rafters descending below the wall plate and supported on timber corbels. The north wall of the north aisle is of roughly shaped random coursed stone from the west end as far as the fourth bay, evidence of its former status as the exterior wall of the earlier church. A small north porch is now a lavatory; the original outer door survives. There are numerous wall monuments throughout.

The south wall of the south aisle is pierced between bays three and five by a further arcade with pointed arches, leading to the Holdsworth Chapel. A wood and glass screen with a door in the central bay divides the chapel from the aisle. To the west of the Holdsworth Chapel is the south porch with outer heavy timber pointed-arch double doors, leading to modern glass and timber doors and screen, and inner heavy timber double doors. A carving attached to the wall over the inner doors has a mixture of symbols and lettering and appears to be a reused fragment.

At the west end the interior of the tower is approached up six steps. A chest tomb with an effigy on the top of Charles Musgrave, archdeacon of York in the C19, is situated in the centre of the tower base. Among other dedications is a plaque displaying brass name plates formerly on pew ends. A small door in the corner leads to the tower stair. The window is a later replica of a Commonwealth window. A tomb with a dedication within a crocketed ogee arch with carved figures below is situated at the western end of the south aisle. Directly in front of the tower at the west end of the nave is the font. This has an octagonal raised stone base and a highly elaborate finely carved wooden font cover.

Between the nave and chancel are two bays occupying a central position between nave and chancel, with the chancel arch springing from the fifth pier and the rood screen two bays beyond, after which the chancel has three bays. In this area is a low dais on which stands the forward altar, with pews in the aisles to either side facing inwards. The carved wooden pulpit, which stands on castors so that it can be moved, is adjacent to the fifth pier on the south side. On the north side the aisle wall is replaced by arcading with pointed arches leading to the Rokeby Chapel. A wood and glass screen divides the chapel from the aisle. On the south side there are two of the Commonwealth windows, with distinctive plain glass in finely leaded geometric patterns.

The rood screen is a delicately carved wooden construction. Beyond are three rows of choir stalls to either side with misericords dating from the C15 with individually carved images. The altar rail has elaborate turned wood balusters of the late C17: this and the misericords may have originated in Kirkstall Abbey. The reredos is wood panelled by Robert Thompson. The panelled ceiling is decorated with painted coats of arms.

The organ is situated on the north side, beyond which in the north-east corner is small chapel, currently a store, with various wall monuments including a dedicatory plaque to the foundation by Nathaniel Waterhouse of a school for poor boys in the C17, and one Commonwealth window. On the south side of the chancel is the Wellington Chapel designed by George Coutts, with three more Commonwealth windows.

Accessed via stone steps from the east end of the chancel is the crypt area. This consists of several rooms including a music room with a ceiling partly vaulted and partly panelled with painted coats of arms similar to those on the chancel ceiling. The walls are partly panelled, with fitted cupboards occupying much of the walls. An office also has panelled walls and a fitted desk, and a vestry has glass fronted cupboards and wood lined walls incorporating a grandfather clock. The windows are mullioned with leaded panes.

SUBSIDIARY FEATURES: at the western approach to the church is an arched gateway with stone piers, three ball finials and swept up flanking walls. Immediately outside is a set of stocks in stone, in poor condition.

The earliest church on the site was probably built around 1120, immediately to the north of the current church. It is likely to have had an aisleless nave to which aisles were added in the late C13. Hubert Walter, later Dean of York, Bishop of Salisbury and finally Archbishop of Canterbury in 1193, was a Rector of the church. The first vicar was ordained in 1274.

The present church was begun in the early C15 by Vicar Wilkinson, as a result of a bequest by Vicar King in 1438. It reflected the growing prosperity of Halifax as a result of increasing trade. It was re-sited to the immediate south of the previous building, whose south wall was used as part of the north wall of the new church. A south-west tower was intended, but was eventually built at the west corner instead: begun in 1449, it was finally completed in 1482. The nave and chancel with its clerestorey was completed in c.1480, and a clerestorey was added to the south aisle of the nave in 1505. In around 1530, the south porch was added. The font cover dates to the C15, possibly pre-Henry VII judging by its decorative scheme, and the west window also dates from the later C15.

William Rokeby, vicar in 1502 and later Archbishop of Dublin, who died in 1521, requested a chapel on the south side of the church. However, before this could be built Robert Holdsworth arranged the building of a chapel on the favoured south side, in honour of his father, also Robert, vicar, who had been murdered in the church in the course of a robbery. The Rokeby Chapel was therefore built on the north side of the church and both were completed by c.1535. The woodwork of the screens in the side chapels is from the first half of the C16, though they are not in their original position.

The pews (originally higher than now) and the choir and nave roof date from the early C17: the painted coats of arms were added later. The church suffered some damage in the course of the Civil War, when the font and some windows were lost. The windows were replaced by the Commonwealth windows (plain glass set in distinctive finely leaded geometric patterns) in 1652 and 1657 by the widow of Nathaniel Waterhouse who died in 1645. The font was replaced in 1661 and the C15 font cover, which had been stored, put back in place. Galleries were built in the C17 and early C18.

A major restoration took place in 1878-9, funded by local manufacturer Edward Akroyd of Bowling Dyke Mills in the town, and led by Dean Pigon, vicar of the church. He employed Sir George Gilbert Scott to oversee the restoration, and on the death of Sir George his son John Oldrid Scott continued the work. In the course of the scheme, the galleries were removed, plaster was taken off the walls, the pews were lowered, and dormer windows in the aisles, a Queen Anne screen and a three decker pulpit all removed. The organ was moved from the west end to its current location, a new reredos installed at the east end and screens around the choir and pulpit were introduced.

The Minster Parish Church of St John the Baptist, Halifax, is designated at Grade I for the following principal reasons:
* Early Date: elements of the fabric date from the C12, while the majority is of C15 date;
* Architecture: the church displays exceptionally fine architectural detailing of the C15 both externally and internally, together with rare examples of Commonwealth period patterned windows;
* Internal features: there is a wealth of internal features including C17 and C18 wall memorials, C15 misericords, and C16 wooden screens