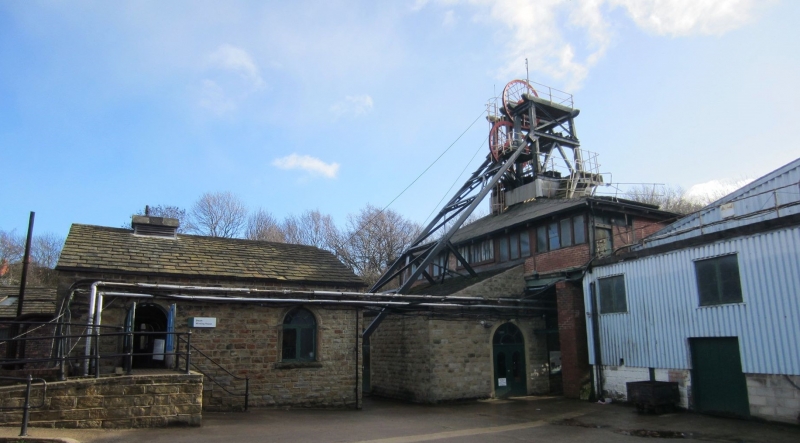 Winding house, heapstead and headstock. 1876 and later. Coursed, squared
stone winding house with stone slate roof. The heapstead has a stone base,
the upper part is of brick with steel and concrete reinforcement, and an
asbestos roof. The headstock is wooden with later steelwork. The winding
house has a central doorway up stone steps and has a tablet reading:

Round-arched window to each side. 2 similar windows to rear, one now a
doorway. The base of the heapstead has round-arched, brick-vaulted openings
to the shaft head. A 1987 stone building has been added to the north side in
keeping with the winding house. Concrete and brickwork encloses the upper
part and has a hipped asbestos roof. The headstock tapers and the wooden
sections are plated at the joints, the lower sections encased in concrete.
Cast-iron spoked winding wheels. Later steel work ramps down to the winding
house.
The wooden headstock is thought to be the last surviving example in
Yorkshire.- The winding house contains the original Davy Bros. twin cylinder
steam winding engine, which was used regularly until 1974, and occasionally
until 1981. The shaft is thought to date from 1791 and was sunk for James
Milnes. The lease was bought by Sir John Lister Kaye of Denby Grange in
1827. A new company took over in 1917.
Other attached buildings not included in the list.