A Grade I Listed Building in Langley St Mary's, Slough 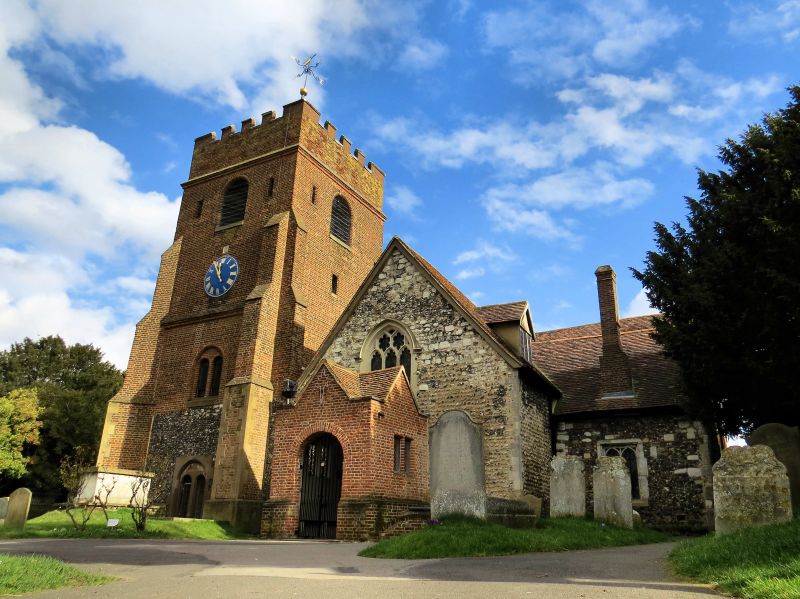 Nave: three-light gabled dormer to south with diamond leaded panels; three-light west window with panelled tracery and returned hoodmould, and arched doorway beneath with boarded door. Porch gabled to north, south, and west with round arched entrance and two-light openings to north and south.

Monuments include: that in the chancel to the Kederminster family of 1599 in alabaster with two Corinthian columns supporting entablature with coat of arms, and two facing pairs of kneeling figures with their children below; tablet in chancel of 1626 with Latin inscription, and pilasters supporting cornice with military trophies and coat of arms above; tablet in north aisle to Dorothy King of 1684 with Ionic pilasters and broken segmental pediment with coat of arms; that to David Harvey of 1788 in Coade stone with woman standing beside angled pedestal with urn; that to Robert Gosling in north chapel of 1794 with obelisk, sarcophagus and urn; that in south chapel to Robert Bateson Harvey of 1825 with the seated figure of a christian pilgrim; two brasses, to Robert Harvey 1863 and to Robert Bateson Harvey of 1887. This church is particularly interesting because of its wealth of fittings and monuments, notably the library which is unique. Churchyard memorial to the artist Paul Nash (1889-1946).