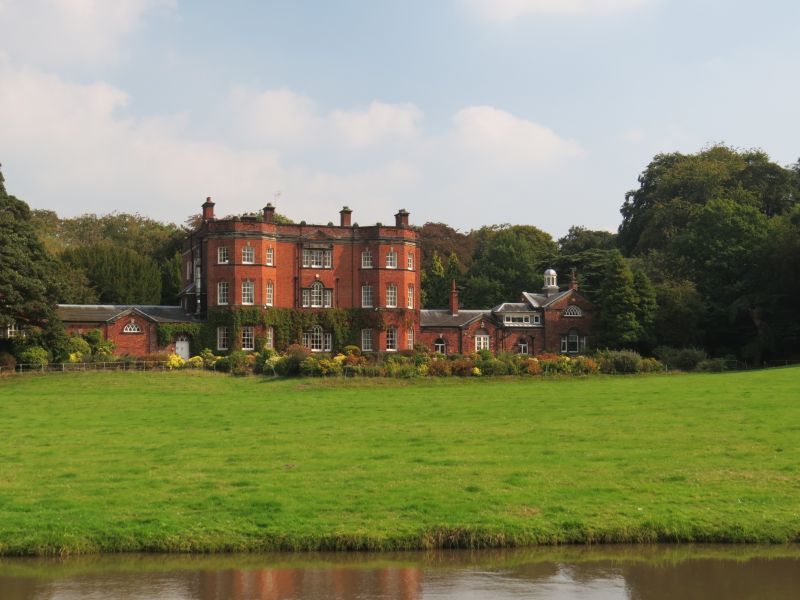 Country house. Early/mid C18. Flemish bond brick with ashlar
dressings and a slate roof. Three-storeyed central block with single
storey wings which terminate in 2-storey pavilions. L-shaped plan.
Garden front: The central block is of 3 bays symmetrically disposed.
To the centre at ground and first floor levels are Venetian windows
with ashlar surrounds and to the second floor is a tripartite window
with a steep pediment above the central light, resting on moulded
brackets. To either side are canted bay windows which have stone
bands at the level of the sills of the first and second-floor windows.
These windows are of 3 x 4 panes to the ground and first floors and of
3 x 3 panes to the second floor, all the windows having flat arched
heads with projecting keystones. To the top of the wall is an ashlar
cornice above which is a panelled parapet of brick which has an ashlar
coping with ball finials to the corners and at centre. To either side
and slightly recessed are the single storey wings of three bays each
and having round-arched windows with projecting springers and keystone
and a doorway at right of the left hand wing. To the centre of each
wing is a slightly projecting bay with pilaster strips to either side
supporting an open pediment. The pavilions which project slightly
have Venetian windows to the ground floor and lunettes above which cut
into the pedimental gables which have ashlar surrounds. To the apex
of the pavilion roofs are circular lanterns which have ogee-domed
roofs of lead and wrought iron weathercocks to the apexes. The
central block has two chimney stacks to either side symmetrically
disposed, which are of brick with ashlar capping.
The rear has a projecting gabled wing at right which has a C20 lean-to
to the ground floor and two blocked windows having flat arched heads
with projecting keystones. This wing has one pilaster buttress at
left. To left of this is the recessed portion and in the re-entrant
angle of the L-shape thus formed and cutting across it at 45 degrees
is a portion of walling which has to ground floor level a doorway with
ashlar surround with an open pediment supported by brackets which are
in turn supported by clusters of shafts. The door is of 6 raised and
fielded panels with lateral lights which have intersecting glazing
bars to the upper panes. To either side are further clustered shafts
and above the windows are extended volutes with rinceau ornament.
Above this at first floor level is a further window of 3 x 4 panes
with an ashlar surround and above this a further similar window of 3 x
3 panes. Above this and projecting into the parapet is a segmental
pediment supported on brackets. To either side of this at ground
floor level are two bays housing windows of 4 x 4 panes with
flat-arched heads with central keystones and there are similar windows
to the first and second floors, the latter being of 3 x 4 panes.