A Grade I Listed Building in Newbold Astbury, Cheshire East 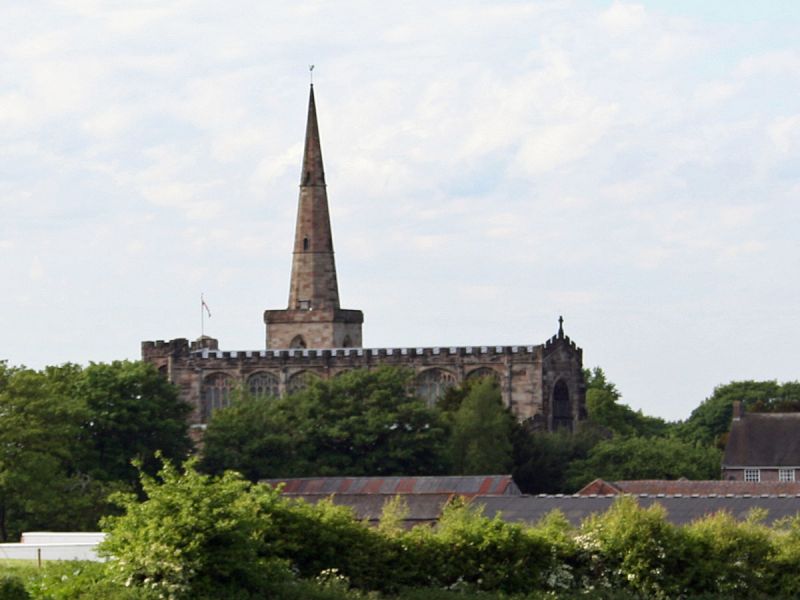 The camber-beams of the nave roof rest on wall posts which spring from
the clusters of shafts mentioned above. They have a series of S
mouldings to their sides. Richly moulded timbers divide the roof into
a series of rectangular panels with florid bosses. To the chancel is
a pyx pendant above the altar with crocketed pinnacles to its sides
and the 5 wounds represented on its base. Above the screen is a
similarly moulded lantern pendant. The churchwardens and carpenter
are also recorded here, for the installation or alteration of the
roof; nine church wardens are listed and the carpenter Richard Downes
and the dates 1616 and 1617. The south aisle roof and that of the
Chapel of St Mary are similar to that of the nave, the angel corbels
appearing to be of C17 form and the floral bosses spelling out

M A IHS R E for the length of the aisle.

The chancel screen has moulded posts and tracery below the dado with a
coved rood gallery of C19 date. The parclose screen is similar. The
stalls in the chancel have hinged seats which originally had
misericords (now removed). The desk ends have Perpendicular tracery
and floral finials. The box pews to the nave are of C17 date with
raised and fielded and arched panels to the lower bodies with panels
of strapwork in relief above, having moulded iron H-hinges. The
pulpit is C17 and octagonal having two rows of round arches resting on
fluted pilasters; the base and handrail are C18 and C19 respectively.
C17 lectern in the form of an eagle holding a ball. The reredos in
the Lady Chapel, the altar rail to the chancel and the font cover and
crane form a set and are of sophisticated late C17 craftmanship. The
reredos has a series of rectangular panels with a dentilled cornice
from which hang pear drops. The altar rail has split balusters with
panels of open strapwork between and acorn pendants to the centre of
the round-arched openings. The font which is of Perpendicular form
has an octagonal cover dying to a square upper body which has broken
pediments to each side and an obelisk to the centre, three sides of
which are cut with fretwork. The winch mechanism is contained within
a panelled case behind the font with a projecting overhang which has
cartouches to the frieze, dentilled cornice with pear drops and a
broken pediment above with a small obelisk between the halves of the
pediment.
Sources Nikolaus Pevsner and The Buildings of
Edward Hubbard England: Cheshire 1971