A Grade I Listed Building in Finchingfield, Essex 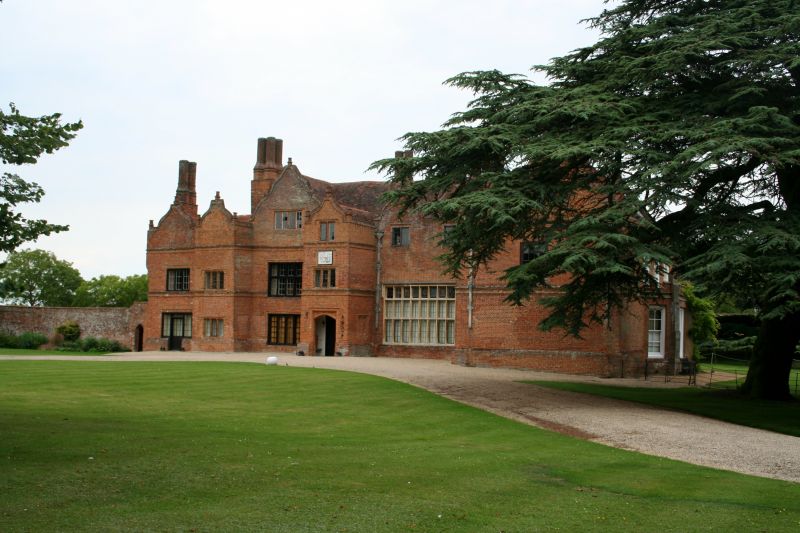 Great house. Circa 1570, with C17, C18 and C19 additions, incorporating a
fragment of an earlier house, c.1400-50. Red brick, mainly English bond, some
Flemish bond, with some plastered timber framing, roofed with handmade red clay
tiles. Complex plan approximately of L-shape with wings extending SE and NE,
main elevation to SW (see scaled plan in RCHM, 91, to which these notes refer).
2 storeys with attics. SW elevation, English bond with moulded plinth, the
storeys divided by moulded brick string courses (originally with recessed
plaster bands, missing), continued round the SE end. 7 original gables, 2 large
and 5 small, all with curvilinear copings. The windows have hollow-moulded
mullions, square heads and labels; 6 of them are original. The porch is carried
up to the full height with one of the smaller gables. The outer entrance has
moulded jambs and a 4-centred arch under a square head with label. The inner
doorway has been brought forward, with an original door with 4-centred head and
mouldings. On each side of the porch there is an original window of 2 lights
with square heads, blocked. 5 lead rainwater heads with arms and initials of
Robert and Elizabeth Kempe, dated 1637, the pipes elaborately ornamented with
strapwork, leopards, cherubs, etc. There are 22 octagonal chimney shafts with
moulded bases, variously restored. The NW elevation, partly of plastered timber
framing, has a moulded plinth, and 2 projecting gables, with 2 carved brackets.
The bressumers and bargeboards are moulded and richly carved with guilloche and
conventional ornament, and at the apices are carved and moulded pendants, early
C17. 3 of the lower windows are original and similar to those of the SW eleva- ..
tion, but still plastered. Under one gable is an original oriel window of 8
lights with one wrought iron casement, some early glass and diamond leading. One
Venetian window, C18. The SE elevation of the NE wing is in Flemish bond, with
on the ground floor 3 C18 sashes of 12 lights with flat arches of gauged brick
and 2 tripartite french windows with segmental arches of gauged brick, and on
the first floor 4 C18 sashes of 9 lights and one early C19. Crown glass. 2
wooden string courses, plain parapet, circular domed cupola with 6 Tuscan
columns and weathervane with pierced design 'TR 1768'. The block NE of the
library retains one bay of a king post roof, c.1400-50, with arch-braced side
purlins and cambered collars. The king post, its one remaining brace, and the
side purlins and their associated braces, are moulded. Medieval king post roofs
are rare in Essex; only 2 other domestic examples are known. The roof is
unsooted and appears to be part of the crosswing of a former house on this site.
The hall has moulded wallplates and moulded and carved beams, 2 of them carved
with a shield of arms and crest, painted. The doorways to the porch and S
staircase have double-chamfered jambs and 4-centred heads, with original doors,
richly moulded with iron handles. The drawing-room has moulded ceiling beams
and a fireplace with richly panelled overmantel of c.1640, flanked by Ionic
pilasters; the walls have panelling of similar date. The early C17 S staircase
has turned balusters, moulded handrails and square newels with turned finials
and acorn tops. The library has double- ogee moulded beams with foliated cyma
stops, oak panelling, and at the N corner there is a blocked doorway with "
4-centred head. The corridor running NE from it has an original brick floor
laid in herringbone pattern. The kitchen has re-used C17 oak panelling, and the
scullery has a large bread oven with wrought iron door. On the first floor, over
the corridor already mentioned there is an early C17 fireplace with brick
depressed arch and chamfered jambs, richly carved arcaded overmantel, and C18
3-movement wrought-iron crane and cast iron grate; the associated panelling is
early C17. There are several early C17 moulded doors, some with drop-handles,
and 2 late C16 moulded 8-panel doors. The roofs are of butt-purlin
construction. RCHM 3.