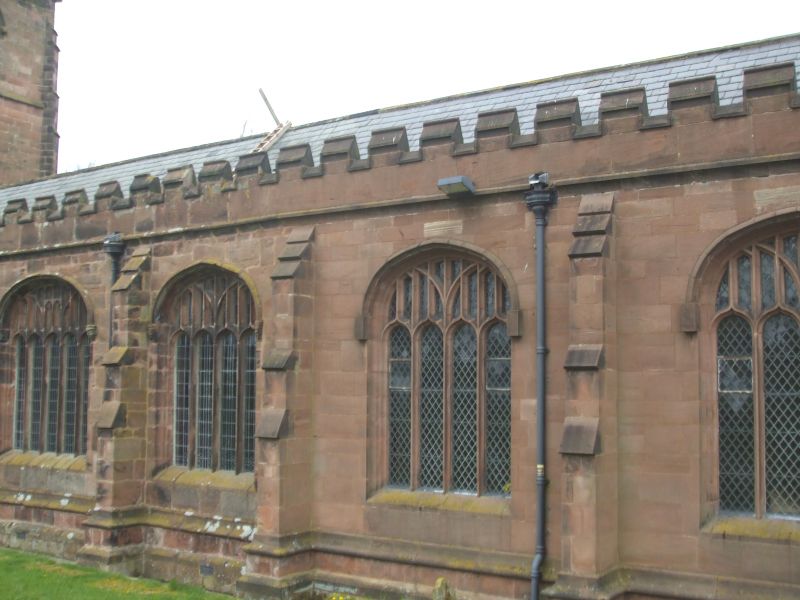 Church. 1543 and earlier with additions and alterations of 1870 by
Ewan Christian and W Milford Teulon and of 1904 by John Douglas and
of 1926. Red sandstone ashlar with lead roof. Western tower, nave
with aisles, chancel. South-western porch and north-eastern vestry.
Tower: diagonal buttresses and moulded plinth, of 3 storeys. Western
front: arched doorway to ground floor with hood mould and 3-light
Perpendicular window above with hood-mould at level of string course.
Plain stage to middle with 3-light belfry openings to top with band of
quatrefoils above and string course above that with gargoyles above
diagonal buttresses and at centre. Battlemented parapet: above. The
north face has a 2-light C19 window to the middle stage with similar
belfry stage as on west front. Nave: South face has 2-storey porch
to far left with diagonal buttresses and 4-centred arch with moulded
surround, hood mould and label stops. The first floor is slightly
jettied and the transformation is effected by a string-course with
roll moulding. There is a central window with a coat of arms
immediately above encompassed by the hood mould. The remainder of the
south aisle has 7 windows of 4 x 5 lights with Perpendicular tracery,
the 2 windows at right being of the Lady Chapel built in 1926. All
bays have buttresses between with offsets and each window has a hood
mould with label stops. There is a battlemented parapet above. the
north aisle has some reset Perpendicular windows dating from the
widening of the aisle in 1904 by Douglas. These are of 2, 3 and 4
lights and set in the lower wall. Upper wall has 3 windows of 1904 of
3 x 4 lights with Perpendicular tracery. Straight parapet above.
Choir vestry of 1933 to far left. East end has a 3-light window with
reticulated tracery to the chancel end. To the left of this is a
5-light Perpendicular window reset from the eastern end of the south
aisle when the Lady Chapel was added in 1926.
Interior: Nave of 6 bays, originally the total extent of the church
before the chancel was added in 1870 and the Lady chapel in 1926.
Tower arch has double chamfered rebate. Octagonal piers to nave
arcades with moulded bases dying to octagonal bodies via broaches and
with moulded caps which have slightly more concave faces to the north
aisle and chamfered mouldings to arches and concave mouldings to hood
moulds which have broaches at their bases. Roof trusses of arched
braces springing from corbels and supporting collars. South aisle
window reveals have chanels to their splayed reveals. Roof of arch
braces rising to collars with king posts above and arched braces to
either side. Chancel of 3 bays built c1870 by Christian and Teulon
with reset 3-light Decorated window giving onto present (1930 s)
vestry. The priest's room above the porch is approached by a fine
late C19 spiral staircase and gallery of timber. The North aisle has
a memorial inscription cut into the stonework of the western wall
which reads THIS AISLE WAS ADDED IN 1904 THE STONES OF THE OLD WALL
WERE PLACED IN THEIR NEW POSITION THE ARCHITECT WAS JOHN DOUGLAS OF
CHESTER WHO LOVED THIS CHURCH IN HIS BOYHOOD AND IN AFTER YEARS
BESTOWED ON IT AS ON MANY ANOTHER CHURCH MUCH SKILL AND CARE HIS
KINDNESS AND DEVOTED INTEREST ARE DESERVEDLY HELD IN REMEMBERANCE
W H STABLES VICAR. The Stanley tomb to the North Wall of the chancel
is of 1543 and has a chest of red sandstone with a black marble cover
inlayed with a brass effigy of a knight in armour with hands clasped
in prayer. Basket arched recess above with tracery to intrados.
Gabled surround with crocketed pinnacles to sides.