A Grade I Listed Building in Germoe, Cornwall 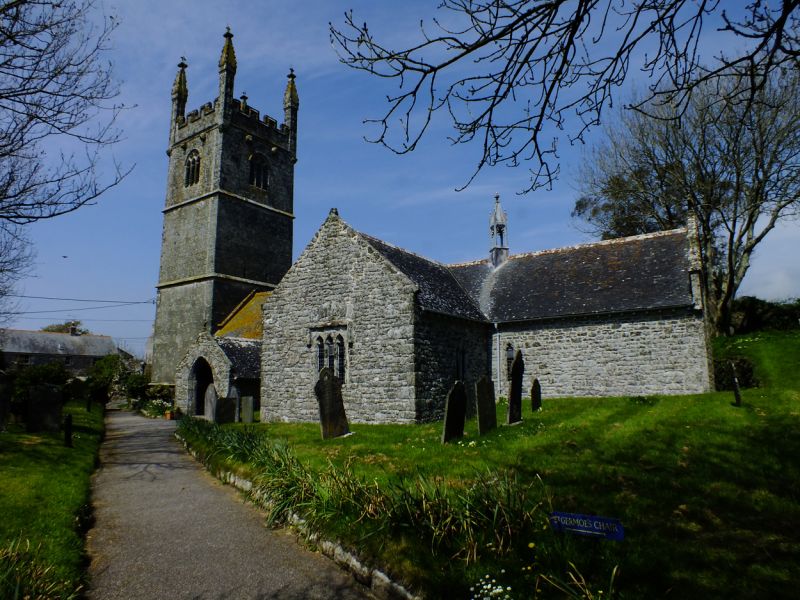 PLAN: probably originally nave and chancel, becoming cruciform in the C13 or C14 with
north and south transepts and a south porch. In the C15 the north wall and transept
demolished and north aisle, north transept (vestry) and west tower added. Several
periods of C19 repair including much re-roofing circa 1860 and a restoration of 1891
probably included new gable copings to the east, west and north gables and a new
chancel east window. Roofs repaired and reslated circa 1950-1952.
Complete C15 3-stage unbuttressed west tower with strings dividing diminishing
stages; embattled parapet with crocketted corner pinnacles. Complex moulded 4-
centred west doorway with square hoodmould with carved oak leaf label stops, 3-light
traceried window over; blind second stage and 3-light traceried window with lowered
or pierced slate lights to the upper stage. Under the parapet are two carved gargoyles
to each side and the panelled pinnacles rise from carved angel corbels.
North aisle: original C15 Perpendicular windows those to gable ends with tracery,
each window within a 4-centred arch; all 3-light windows except the 4-light east
window. North wall has one window left of the north transept and two windows with
doorway between on the right. The moulded doorway has a steep 4-centred arch. C18
door. The north transept has a C15 4-light traceried window in the gable end and
some reused C13 or C14 trefoil-headed tracery in the wall below.
The chancel gable projects beyond the north aisle gable: C19 Perpendicular style 3-
light traceried window over 4 blind panels; the central light is wider.
South wall is blind left of the porch; between the porch and the south transept is a
curious probably C14 3-light flat-headed window with trefoil-headed lights and
quatrefoils to the tracery; to the right of the south transept a single light C13 or
C14 window with a trefoil head. The south transept and south porch have their
original probably C14 gable copings. The transept gable window is C14 flat-headed
with 3 Moorish arched lights, possibly remodelled; C15 square hoodmould and relieving
arch over. In the east wall is a C14 2-light window with trefoil-headed lights. In
the west wall a single light window with a possibly C12 round-arched head. The porch
has its original carved kneeler stones and gable crucifix. The kneelers are thought
to represent longtailed monkeys. The porch doorway and the inner doorway of the
south wall are probably C14, moulded with pointed arches. There are stone benches at
the side of the porch and the inner wall plaster has been stripped revealing a few
ancient stone fragments.

INTERIOR: C12 carved head and two C13 or C14 in the south transept; probably C14 east
impost to the 2-bay arcade between the nave and south transept (otherwise C19 in
Perpendicular style); C13 or C14 trefoil-headed holy water stoup on the left (east)
of the south doorway; original granite ring hanging right of the doorway; C15 4-
centred tower arch over moulded imposts; C15 4-bay standard A (Pevsner) arcade with
moulded stilted arches between the nave/chancel and north aisle; C15 4-centred arch
over standard A (Pevsner) imposts between the north aisle and north transept; C15 4-
centred arched doorway to granite newel stair to former rood at the right (east) of
the north transept arch (the transept is offset slightly to the east to include the
stair turret thickness); evidence for a former probably C15 priests doorway in the
south wall of the chancel; carved granite intrados to the C15 east window of the
north aisle; C19 collar rafter roofs incorporating carved fragments of former C15
waggon roofs; the chancel roof, circa 1850, is of panelled polygonal vault
construction (apparently originally taller than the nave roof); mostly C19 coloured
Ambetti glass in the windows with some C20 replacement and C19 sedilia with piscina
in the chancel. The church walls have been stripped of plaster and repointed and
painted in the C20.
Fittings: C11 font with irregular round bowl with 3 carved heads over a round shaft
carried on a possibly reused pier base; C12 font bowl with cable moulding lying in
the south transept; C17 oak table used as altar; C18 painted wall text boards; three
bells in the tower dated 1753 with the founders mark (a bell) and two with the founders
initials (AR): circa early C20 pulpit: memorial to James Plomer Lemon (church warden)
died 1887 and his wife Henrietta, died 1903, erected by their only son James
Frederick Lemon.

The Church of Saint Germoe is unusual in Cornwall having some C14 architectural
features; however the C15 tower and other C15 features are also very fine.
Particularly interesting are the south gable copings and the carved monkey corbels.