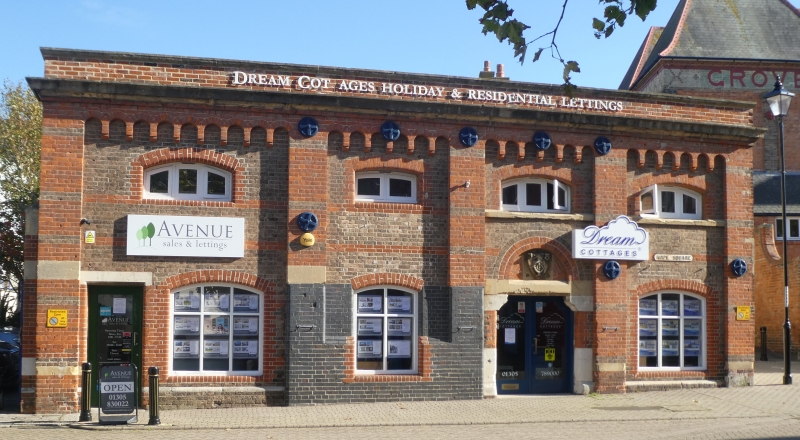 Includes: 1878 Brewery Building HILL LANE.
Brewery building. Dated 1878. Brickwork in English or Flemish
bond, in red, Broadmayne, or engineering blue bricks, and
coursed Portland rubble; corrugated asbestos-cement roof.
PLAN: the building has an ornate narrow brick front to the
Square, and returns, right, to Hill Lane, which climbs to
Barrack Road.
EXTERIOR: front portion has raised central section to gabled
end, set back from the street front, and a broader pitched
roof to hipped outer end to the SE.
The brick front is in 4 sunk square panels divided by flat
pilasters and with Lombard band frieze below a moulded stone
cornice and brick blocking-course to parapet coping, returned
approximately 2 metres to Hill Lane. The first panel has a
plank door under a flush stone lintel, with a plinth to stone
offset.
Bay 2 has a deep loading-door with 2-light window under a flat
segmental head, the threshold being approximately 1m from
pavement level.
Bay 3 has a pair of plank doors, a stone plinth, and boldly
modelled shoulders to a stone transom below a tympanum with
stone and brick decorative infill and a stone shield with
1(87)8 and G I, intertwined.
Above, and also to Bay 4, is a shallow deep-set 3-light window
to a brick segmental arch.
The return wall to Hill Lane, is stepped, but in a continuous
wall plane, with a series of very shallow openings near the
eaves, to brick dressings and bull-nosed sills, and enclosed
by cast-iron grilles, above small cast-iron pierced vents.
Towards the rear is an eaves stack, and a paired larger window
unit similarly detailed.
The left return is rendered, with 3 windows and a door, all to
brick dressings and bull-nosed sills. The raised central
'clerestory' section is clad and roofed in asebstos cement.
INTERIOR: not inspected.
Included as part of an outstanding series of brewery buildings
adjacent to the Square; its detailed front is a prominent
feature in the Square.