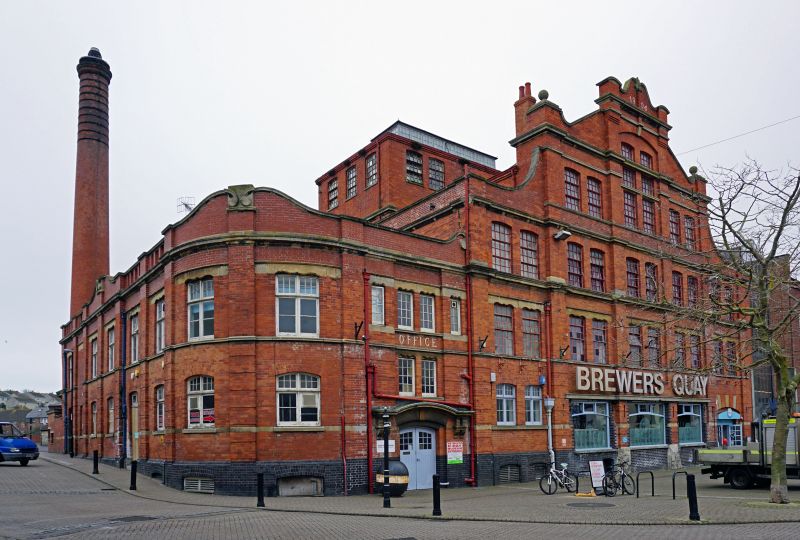 Former brewery, now museum and commercial uses, including the
'Excise House' public house. Dated 1903 on base of stack and
1904 on principal gable, but various late C19 ranges,
including 2 warehouses, and lower ranges to St Leonard's Road
and Newberry Gardens. 1903/4 range built to designs of Arthur
Kinder, for Grove's Brewery.
Red engineering brick with cream limestone dressings,
engineering blue brick plinths, some rubble and rendered
walls, slate roofs.
PLAN: a large complex of buildings incorporating the former
main brewery and associated support buildings, with a glazed
link of 1991 facing Hope Square; the group is enclosed by
Spring Road to the E, Newberry Gardens to the W, and in part
by St Leonard's Road to the N.
EXTERIOR: the main building has a 4-storey front, in a North
German Renaissance style, to Hope Square, dropping to 2
storeys to the left and returning by a quadrant corner to
Spring Road and the main circular stack. The centre of the
block rises to a tower with roof lantern, and behind this are
twin warehouse ranges. The front is in 5 bays with paired
multi-pane casements to cambered heads, separated by broad
brick pilasters and continuous moulded stone cornices to a
broad stepped and shaped gable crowned with a double scroll,
and with date of 1904.
The central 3 bays to the ground floor have large display
windows with triple light above a curved transom, and a deep
plain fascia board; to right a wide segmental-arched doorway
with brick and stone voussoirs. The gabled roof runs back to
the central tower, with lantern retaining 3x9 small-pane
lights to basket-handle heads, and the brick tower has various
original small-pane casements to cambered heads.
To the right of the 1904 front is a lofty gabled glazed link,
the principal entry to the complex, and brick facades, part
rebuilt c1950 after wartime damage, a further 3-storey brick
range with arched openings to the upper storeys, and a
deep-set entrance to the left, and a lower 2-storey unit with
2-light casements and transom under segmental heads, plus a

wide entry; this range returns in rubble with stone dressings
to Newberry Gardens.
The return to the left, to a curved quadrant corner with
decorative cast-iron cresting, is in detail similar to the
front, but on a smaller scale, in 6 bays, the centre 2 raised
to a scrolled pediment, and with stepped brick eaves course.
To its left the tall circular stack with moulded brick capping
and banded upper section rises from an octagonal stepped blue
brick base on a high square podium with bold stone cornice;
the plinth has a stone panel with 'G S Ltd 1903' (Groves
Brewery).
A single-storey brick and slate hipped roof range returns,
with continuous raised lantern, to a 4-storey warehouse with
central projecting gabled hauling-way over 2 loading doors,
flanked by 4-pane lights to segmental heads. The E side of
this building has an original 4-light small-pane dormer
window, and a plain rendered flank wall.
To its left a further warehouse has a shaped parapet to a
brick front with cream brick dressings. There are 3 small
attic lights above 2 deep arches with large casements, tympana
and apron panels, and a wide segmental opening to the ground
floor. This has a date stone with JC 1879 inscribed.
A wide rendered 3-gabled low range returns to Newberry
Gardens, with a rubble wall and brick dressings. The centre
range has a high front block to Hope Square, with a continuous
louvred lantern and 2 brick stacks.
INTERIORS have been adapted to various new uses, but much of
the original structure remains, including timber queen and
king post trusses and the principal range has, in the ground
floor of the 'Excise House' heavy cast-iron columns in 5 x 4
bays to 4-way bracketed heads to jack arches. At the rear end
of the new glazed entry is a high triangular pediment with a
plaster cartouche, and inscribed D & Co (Davis) under the date
1902.
HISTORICAL NOTE: there has been a brewery on the site since
1252, until final closure in the 1980s. In 1742 it was owned
by the Flew family, and was sold to William Devenish in 1824.
There were 3 separate breweries; the smallest, Davis Brewery,
ceased working in the early C19, and Groves continued until
1960 when it was incorporated with Devenish.
The late C20 adaptation of the buildings was an interesting
co-operation between the Local Authority and the owners, as
part of a general up-grading of the whole area. 2 early
engines have been retained and displayed; the earlier is from
1851, built by Barrett, Exall and Evans of Reading, and the
other, of c1890, by ES Hindley and Sons of Bourton, Dorset.
The buildings have intrinsic architectural interest, but, with
the total disappearance of brewing from the Hope Square area,

they are part of an outstanding group and also a vital
reminder of a major industry in Weymouth for many centuries.
(RCHME: Patrick A: Report: 1995-).