A Grade I Listed Building in Great Dunmow, Essex 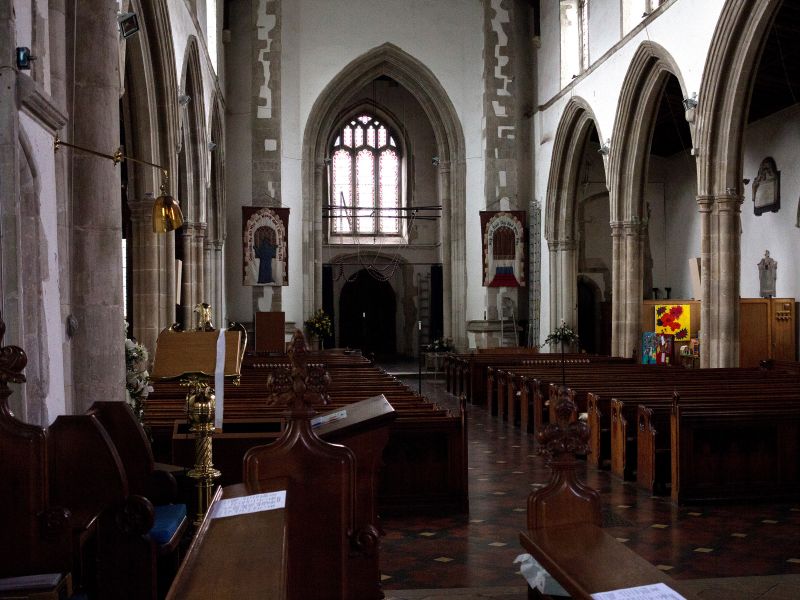 Parish Church of St. Mary the Virgin. C13 presumed origins,early C14 chancel
and out aisle walls, C15 south porch, arcade, chancel arch, tower and S chapel,
all restored in late C19-early C20. The walls are of flint rubble with
dressings of limestone and clunch and some brick patching of the tower. Roofs
are lead covered, steeply pitched over the chancel. This is of the early C14
and relatively complete with 4 windows to the N, an extensively restored W
window, double piscina, moulded string course at cill level. The roof is of 7
cants and C14 and the exterior carries a contemporary gable parapet with
decorative kneelers. The S wall has an inserted arcade of the late C15-early C16
gaining access to the S chapel with 3 contemporary large windows. The nave
arcade is of the mid C15 with some reused C13 material, similar to the S chancel
arcade with moulded 2-centred arches, 4 attached shafts with moulded bases and
capitals. The roof is of 2 separate phases and designs, but both with king
posts and studs of probable C18. The clerestory windows of the C15 have 2
cinquefoiled ogee lights. The S aisle has retained the early C14 S door with
moulded 2-centre arch with an attached shaft to each jamb with moulded capital
and base and moulded label. The S aisle windows are C14 but much restored and
the roof is of C15 form. A gallery extends into one bay, open to the upper S
porch chamber and is supported on a C15 moulded portal frame. The N. aisle has
4 windows, 3 of the C14, much restored and one of the C15 and a west window,
part C14 and part C15. The S porch of the C15 with an upper chamber with piscina
and corner stair turret. Walls have a moulded plinth with crocketed corner
pinnacles. The flanks have windows of 2 cinquefoiled lights. The W tower is of
3 stages with square, splayed angled buttresses, carried up on embattled
turrets. The parapet is embattled. The C15 tower arch is moulded and 2 centred
and there is a contemporary chamfered moulded tower chamber floor with carved
boss intersections. The W doorway has moulded jambs and a square head with
traceried spandrels, each with a plain shield and a band of ornamented squares
above. W window is of 3 cinquefoiled lights with tracery. N, S and W walls of
second stage have windows of 2 trefoiled lights. The bell chamber has, in each
wall, a window of 3 cinquefoiled ogee lights with tracery in a square head. The
vestry is C19. The interior contains a font in the S aisle, a disused octagonal
bowl with panelled sides. The door to the porch chamber is C15 and a probable
C16 door in the C14 S. door opening. A number of the windows contain fragment
of C14, C15, C16 and C17 glass. Monuments to Sir John Saynnerton Dyer 1701, and
to Sir William Beaumont 1718 by C. Horsnale in the chancel and to John Lord
Henniker 1803, Dame Anne Henniker 1702 and Elizabeth Smith 1652, in the N aisle.
Group of 17,C18 and early C19 headstones to the immediate S and SW of the S
porch. Graded for architectural, historic, topographical and townscape value.
(RCHM 1)