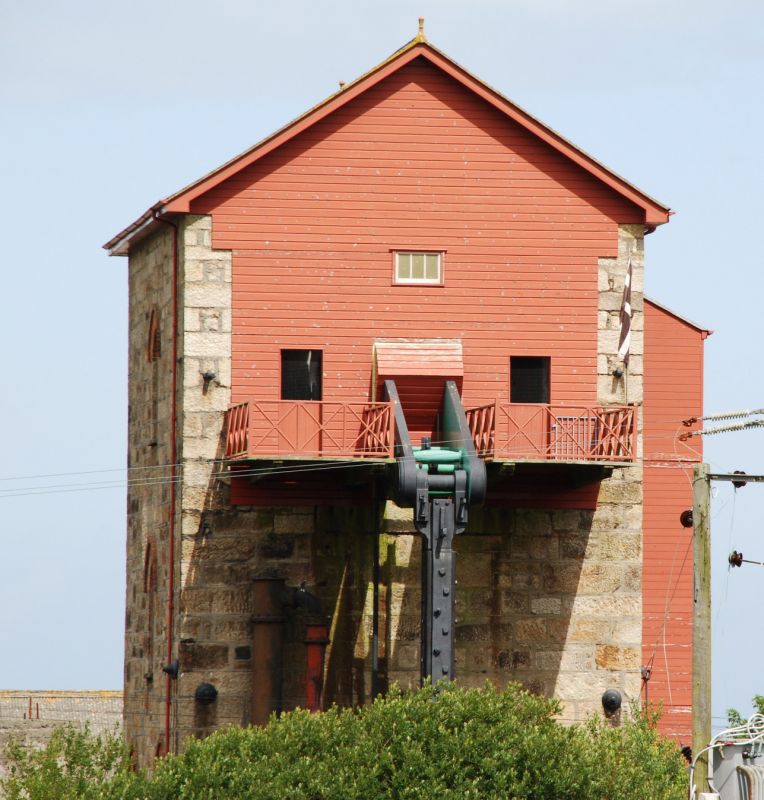 GV II*
Pump engine house, now National Trust museum. Dated 1924 on keystone of
driver's window; built by East Pool and Agar Ltd mine; slightly altered, and
restored. Coursed squared granite, window arches of brick, wooden shuttering to
beam opening and cantilevered steel-frame bob platform, slate roof. Rectangular
plan on north-south axis, with bob wall to south, altered pumping plant in shaft
in front of bob wall. Four stages, with round-headed openings including the
driver's window in the bob wall, which has granite ashlar voussoirs with a raised
keystone inscribed "1924", and radiating glazing bars; a large raised cylinder door
in the rear wall with glazed and panelled door and matching side windows all
under a semicircular fanlight with radiating glazing bars; and various sashed
windows with radiating glazing bars. The bob-plat at the front is divided in the
centre where the front of the beam is coupled to the plunger of the pump.
Interior: contains 90-inch cylinder engine designed in 1892 by Nicholas Trestrail
with 52½ ton beam made by Harvey & Co.Ltd at Hayle, originally at Carn Brea
Mine and purchased second-hand for use here; and all associated controls, etc.
History: very late and fine example of traditional Cornish engine house,
constructed at new shaft sunk in 1922 to enable old workings of East Pool Mine
to resume production after a fall of ground in 1921 had destroyed 2 other shafts;
continued working until 1953; the shaft is still used as part of the drainage
system of South Crofty Mine.
Forms group with its associated chimney stack (q.v.)