A Grade I Listed Building in Wadebridge, Cornwall 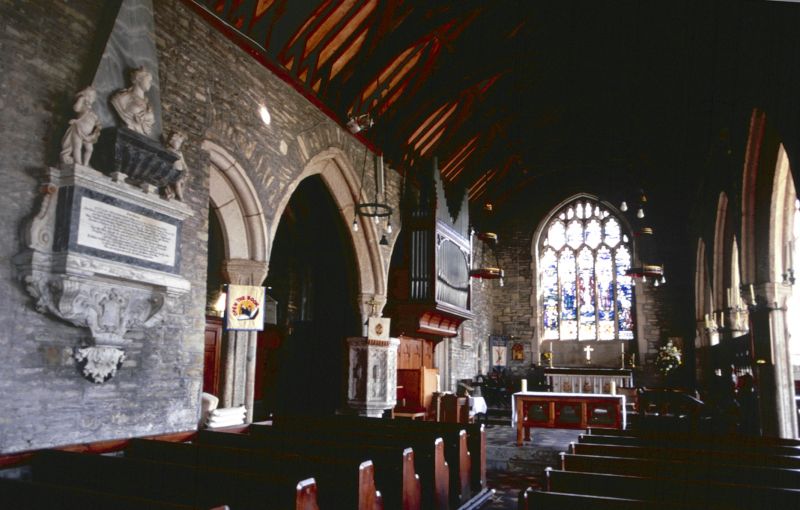 Parish Church. Apparently undedicated. Norman origins with Norman font extant
although the Church was largey rebuilt in the C15. Restored in 1867 by J.P. St
Aubyn. Stone rubble north wall of nave and north transept. Ashlar slatestone south
aisle with moulded granite plinth. Ashlar slatestone west tower. East wall of
chancel and south porch largely rebuilt in ashlar slatestone in the C19. Slate roof
with nave and chancel in one.
Plan: The Church appears to have comprised a nave, chancel and north transept with
early masonry extant in the north wall of the nave. In circa C15 a 6-bay south aisle
was added and possibly, slightly later a south porch which was rebuilt in the C19.
Probably contemporary with the south aisle, the north transept was extended to the
east although only one bay of this north aisle was completed; the segment of an arch
to the west was partly rebuilt in the C19 with the earlier relieving arch above
insitu. In circa 1470s Lovybound, vicar, erected the west tower (qv Wadebridge
Bridge).
Exterior: Tall impressive west tower of 3 stages with set back corner buttresses,
battlemented parapet and crocketted finials. Projecting stair turret on north east
corner. West door has a pointed catacleuse stone arch with carved jambs decorated
with ascending and descending serpents. On the labels are carved 3 hearts banded
together by a ribbon and inscribed 'Lovybound': C19 3-light Perpendicular west window
and circa C15 3-light belfry openings with slate fenestration. Clock 1835.
The north wall of the nave is lit by two 2-light circa early C14 windows which flank
the north door. A late C20 vestry has been added on the north side. Circa C15 3-
light windows with cusped heads to north transept, the north window much restored and
with the earlier relieving arch above indicating that the opening was enlarged in the
C15. 5-light circa C19 east window and Perpendicular circa C15 east window to south
aisle.
South aisle with C15 4-light Perpendicular windows carved with diagonal stops on the
inside. Gabled south porch appears to have been rebuilt in the C19, the entrance
with 2 circa C15 jambs reset and the C15 waggon roof reused. Circa C15 4-centred
arch to south door with hollow chamfer and ogee headed empty niche above. C19 door.
Interior: Walls unplastered. No chancel arch and almost rounded headed tower arch.
C19 arch braced roof to nave, chancel and north transept and C15 fine waggon roof to
south aisle with carved ribs and bosses and carved corbelled angels decorating the
carved wall plate. 6-bay arcade to south aisle with type A (Pevsner) piers and
simply moulded pointed arches. Indication of partial C19 rebuilding on west corner
of north transept; two bays of north aisle to north with type A (Pevsner) piers, one
arcade arch pointed and the wider arch on the east obscured by the C19 organ, On the
west only half an arch remains, the arch rebuilt in the C19 but the relieving arch
above indicating a low almost round headed arch.
C19 furnishings. Circa C15 octagonal pulpit of Caen stone with remains of earlier
colouring on west and east sides. Probably Norman font restored in the C19; Norman
square bowl decorated with arcade of blind arches on four faces. C19 shaft with 4
thinner shafts at the corners and C19 base. Remains of holy water stoup by north
door and stoup by south door has a small square bowl and a heraldic shield below.
C19 aumbry in chancel.
Memorials: Slate memorial to the Kestell family in the west tower with heraldic arms
carved in shallow relief. Several C19 memorials to the Molesworth family including
memorial to Arscott Ourry Molesworth (1823) by Richard Westmacott, R.A. and monument
to Dame Barbara Molesworth, 1735.
Glass in east chancel window by G. Cruttwell and T. Hamilton, 1930.
Colquitt-Craven, Joan Egloshayle Church, Wadebridge.
Maclean, Sir JohnParochial and Family History of Deanery of Trigg Minor, 1876 Polsue,
Polsue, J Lake's Parochial History of the County of Cornwall, 1872
Polsue, J Lake's Parochial History of the County of Cornwall, 1872
reprinted 1974