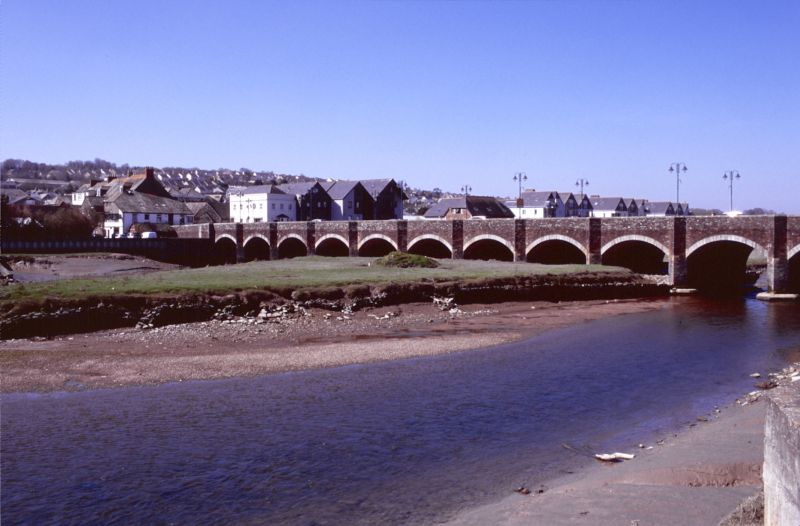 Road bridge over River Camel. Circa 1468, financed by Thomas Lovybound vicar of
Egloshayle. Widened in 1847 and again in 1963, the consultant engineers Posford,
Parry and Partners.
Local stone rubble. Granite dressings used in the alterations of 1847 and 1963.
The bridge, 320 feet long, originally had 17 arches, 12 of which visibly survive; the
end arches having been built up and were used as cellars. The original pointed
arches are 18 feet 6 inches wide and rise some 9 feet from the springing point. The
piers are 12 feet wide with deep cutwaters between each arch, rising to form refuges
in the parapets. In 1847 granite segmental arches were inserted across the cutwaters
to widen the carriageway by 3 feet on either side, thereby diminishing the depth of
the cutwaters. In 1963 the bridge was widened on the south east side, almost
doubling the original width of the bridge. The design of the granite segmental
arches of the 1847 widening was copied using rusticated granite blocks with cutwaters
repeated, rising to form refuges.
The bridge was mentioned by William of Worcester in his visit of 1478 and a detailed
account is given by Leland (1538). The bridge originally connected 2 chapels on
either side of the river, one dedicated to St Michael and the other known as King's
Chapel, both of which have been demolished.
Local legend states that Lovybound, patron of the bridge, was unsure how to build
foundations on a river bed; however, after a dream about sheep shearing he set bales
of wool on the river bed, which in time swole up and bound the shifting mud, thereby
allowing secure foundations to be laid.
Henderson, C and Coates, H Old Cornish Bridges and Streams, 1928, reprinted 1972
Polsue, J Lake's Parochial History of the County of Cornwall, 1872 reprinted 1974
Country Life 7 Jan 1965