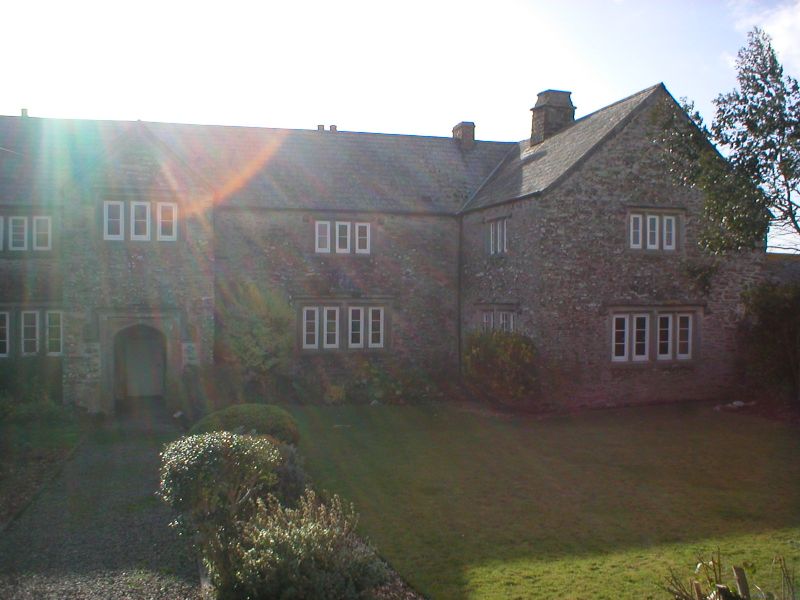 Large house. Datestone of 1631 in arch in front of house, although the house
probably has earlier origins. Stone rubble. Regular slate roof with gable ends.
Stone rubble axial stacks, partly rebuilt but revising the moulded early C17 granite
caps. Circa C20 shafts to the projecting rear lateral stacks.
Plan: 'E' shaped plan with central 2 storey porch. Wide through passage, blocked to
rear. Hall and inner room or parlour on higher left hand side; lath and plaster
partition, probably replacing screen at lower end of hall; stone rubble cross wall at
higher end. Hall heated by large fireplace in rear lateral stack. Cross wing on
higher left side of hall contains the inner room at the front, heated by an axial
stack and with a C18 stair to rear, probably replacing an earlier stair. On the
lower, right hand side of the through passage, the large possibly parlour or kitchen
is heated by a rear lateral stack and the room in the front right hand wing is heated
by an axial stack with a small probably dairy to rear. In the C19 a kitchen was
added to the rear of the hall and in the C20 the rear elevation, below the passage
was partly altered and rendered. 1
Exterior: 2 storeys. Regular 1:2:1:1:1 window front with central gabled 2 storey
porch and gable ends to projecting wings to right and left. 4-light mullion windows
with central king mullions on ground floor and 3-light mullion windows on first
floor. The importance of the hall and chamber above are emphasised by each -having 2
windows. Several of the windows have C18 or C19 casements and some early leaded
glass survives insitu. Roll moulded 4-centred granite arch in 2-storey porch with
carved spandrels. Inner doorway has 4-centred arch with chamfered jambs, the right
hand jamb with a ball stop and the left hand jamb a diagonal stop.
Interior: Central through passage blocked to rear. Hall has a large hollow
chamfered fireplace with a late C17 door to the adjoining cupboard to left. Fine
quality circa C17 plaster coat of arms on higher end wall of hall. Repainted in
circa early C20. The heraldic arms displayed include those of the Barrat, Bere,
Trewin, Coade and Kestell families and a drawing of the arms is illustrated by
Maclean. The chamfered beams recorded by Lysons are no longer visible and oak
panelling was recorded as having been removed prior to the early C19. The hall
ceiling appears to have been lowered and conceals the top of plasterwork. The
parlour or inner room on the higher side of the hall is heated by a late C16 or early
C17 granite fireplace with roll mould and central triangular motif with ball finial.
C18 stair directly to rear with thick stick balusters, square newels and a deep
moulded rail. There are two C17 ovolo-moulded doorcases on the first floor with
vase-shaped stops. Off the chambers above the hall and inner room are 2, probably
C17 gardrobes or closets, which have their original C17 doors with cocks-head hinges
and are lit by small single light windows with pointed heads, each constructed of a
single piece of timber. The wardrobe or closet above the hall adjoins the projection
for the rear lateral stack and is directly above a small cupboard on the ground
floor.
The roof structure appears to have been completely replaced in the C20.
First floor of lower end not accessible. Seat of the Beres, Barrets, Godolphins and
Mitchells. Recorded in the Hearth Tax Returns for 1664 as having 8 hearths.
Source: Reverend D Lysons, Magna Britannia, 1814.
Sir J Maclean, Parochial and Family History of the Deanery of Trigg Minor, 1876.
E H Sedding, Norman Architecture in Cornwall.
T L Stoate, Cornwall Hearth and Poll Taxes, 1660-1664, 1981