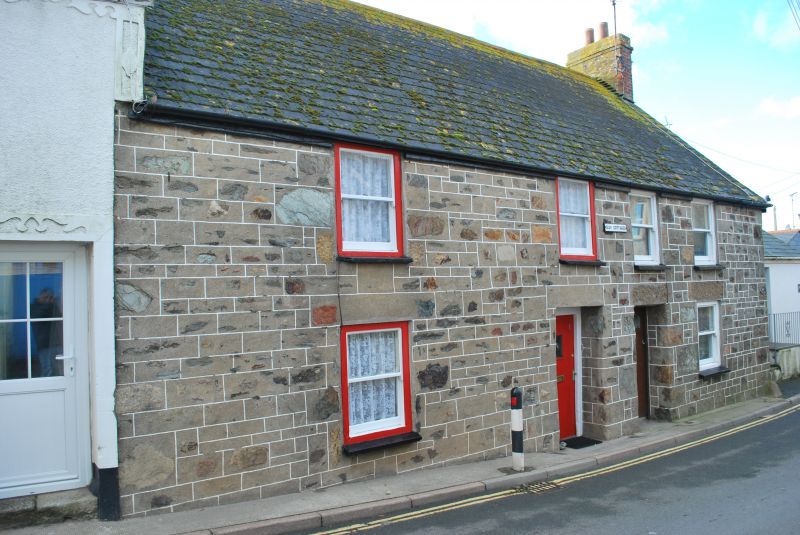 2 cottages and adjoining outbuilding, the cottage originally a house. All C18.
Granite and elvan rubble walls with some dressed granite. Steep asbestos slate roof
with deep brick chimneys over the gable ends. Corrugated asbestos roof over the
outbuilding swept very low over integral rear outshut.
Plan: double depth plan. Originally 2 rooms with a central cross passage leading to
a stair hall between 2 rear service rooms. In circa the early C19 converted into 2
cottages by adding a second passage and stair, right of the original passage. The
outbuilding is on the right, its front set back from the front of the house and
projecting much farther at the rear.
2 storeys. Regular 4 window north front, probably originally a symmetrical 5-window
front with central doorway. Now with 2 doorways, the right hand doorway in former
C18 window opening with circa early C19 6-panel door with, flush beaded bottom panels,
moulded lock rail and later glazing to the top panels. The other doorway (original)
has C20 door. The windows are C20 horned sashes.
The outbuilding is rendered at the front and has a doorway approached by C20 steps.
The right hand return wall is unaltered with irregularly disposed door and window
openings with old windows in 2 openings, 2 of the lintels are oak with scratch
moulding.
Interior : left hand cottage only inspected : many C18 features including Chinoiserie
stair, 2-panel doors, bowtell-moulded beams and muntin and plank-softwood partitions.
The other house said to be even more complete and unaltered.