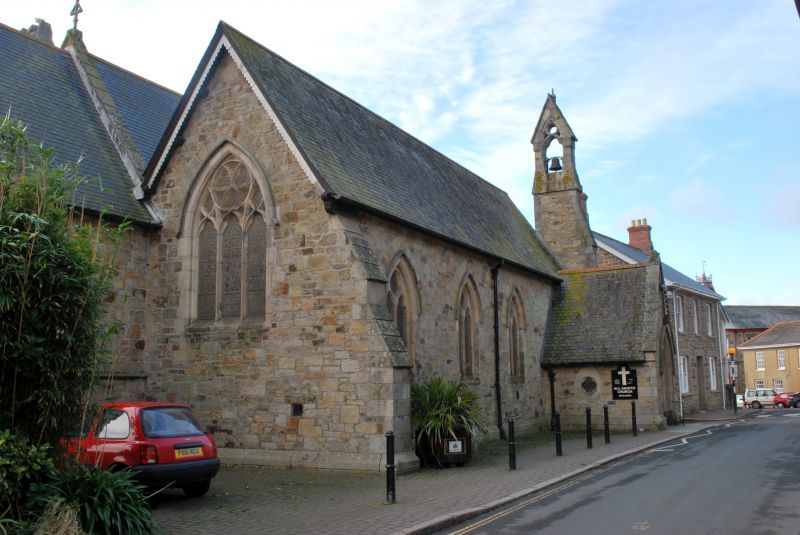 Parish church. Built in 1861 to a design by Piers St Aubyn; the north aisle being an
addition to the original scheme. Granite rubble walls with dressed granite copings,
quoins, doorways, windows and other architectural features. Dry Delabole slate roofs
with decorated slate verges to the gable ends of the 3 main parallel roofs and porch
and vestry roofs at right angles to the main block.
Plan: nave with apsidal-ended chancel beyond a chancel arch; similar north and south
aisle linked by 4 bay arcades to nave; north porch at the west end of the north aisle
and vestry at right angles to the east end of the south aisle. The corners of the
church north and south and the ends of the arcades (west) have substantial external
buttresses. A bellcote over the north west corner of the north aisle is buttressed
on to the porch wall and to the west, Decorated Gothic style.
Double plinth. Tall elevations, mullioned windows with trefoil-headed lights and
coloured leaded glass; hoodmoulds over the pointed arched openings.
North wall: 3 bays plus porch, right, with complex moulded ordered doorway to coped
gable end with cruciform apex. 2-light windows with quatrefoils over.
South wall: 4 bay with window to each bay similar to those of the north wall.
West wall: 3 steep gable ends each with 3-light window with Decorated style tracery,
the nave gable and window slightly taller than the flanking aisle gables. On the
left is a tall buttressed bellcote with weathered offsets and a granite ashlar bell
cradle with traceried bell opening and steep weathered gable over. The left hand
side of the bellcote is integral with the west (side) wall of the porch.
East wall: central apsidal chancel projection between north and south aisle gables.
The round ended chancel has 5 single lights at its east end and the aisle gables have
windows similar to those at the west end.
The vestry
Interior : 4-bay Portland stone arcades with octagonal piers and pointed arches
between the nave and the aisles pointed chancel arch carried on corbelled imposts;
arch-braced roof structures, the nave roof also with curved wind braces; black and
brown earthenware floor tiles and the whole interior virtually as built.
Fittings: granite Norman style font with 4 corner shafts; pitch pine pews, each pew
numbered with a Roman numeral, and octagonal pulpit with Gothic style tracery.
Memorial windows : all windows with coloured glass, some of rather standard late C19
type but some of the windows are quite striking. North aisle north windows to :
Nicholas Bowden, 1761-1850 and Mary his wife 1761-1846; Elizabeth, wife of Major
General JHB Longden, 1799-1875, and Joseph Longden, 1774-1847 and Jane, his wife,
1773-1846. The east window of the north aisle depicts the crucifixion and the west
window is of Jesus with children. The west nave window is to Richard Wellington and
family, including son Richard, a metallurgist. The south aisle south windows are to
the St Aubyn family, including a window depicting the construction of a church to J
Piers St Aubyn, Architect (of this building and much other work in Cornwall) 1815-
1875. The west window of the south aisle depicts Jesus travelling to Jerusalem.
This church is one of Piers St Aubyn's more successful buildings see also St
Michael's Mount qv.