A Grade I Listed Building in Mawgan-in-Pydar, Cornwall 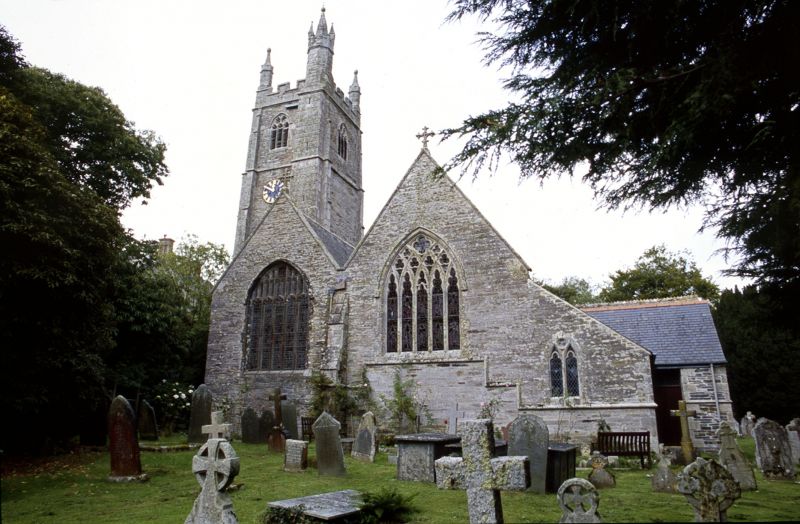 Parish church. C13, with additions of early and late C15. Restoration of 1856-63 by William Butterfield, and later C19 restoration. Slatestone rubble with granite dressings. Tower has granite ashlar buttresses and parapet. Slate roofs with crested ridge tiles and gable ends with raised coped verges to east.
Plan: Nave and chancel in one with north transept. The south aisle was begun circa early C15 and completed late C15, with late C15 south tower. South porch probably originally of C15, substantially rebuilt in C19. C19 vestry probably by Butterfield.
Exterior: The nave has a tall 3-light window at the west end, narrow, with cusped lights; C19 weathered buttress to left and right. North side has 3-light C19 Perpendicular window, 4-centred arched doorway with C19 door with strap hinges and 3-light window with cusped lights and square hood mould.
Chancel has a C19 5-light east window in Decorated style with 4-centred arch and
hood mould; the string course is stepped below the window to the vestry to north.
This has a pitched roof and 2-light window with trefoil lights. Smaller 2-light
window to north.
North transept has north gable end with string course and C19 Perpendicular window. C19 triple cusped light to east.
The south aisle has 3 bays to west with a central porch and one further bay to east of the tower. All windows are 3-light C19 Perpendicular, with 4-centred arch and hood mould. Gabled south porch has re-used 4-centred arched doorway with carved quatrefoils in the spandrels; C19 wooden gates across with strap hinges and spike finials. Interior has stone benches and tiled floor. C19 arched-brace roof with re-used C15 carved bosses. 4-centrd arched inner doorway with roll-moulding and similar carved spandrels, square hood mould, C19 double doors with good ironwork. Image stand above.
South Tower in 3 stages, on chamfered plinth with ashlar set-back buttresses
diminishing in size to the top stage. Embattled parapet with polygonal turrets, each surmounted by an obelisk with ball finial; north east stair tower with lancets and larger turret with obelisk and ball finial. South door has 4-centred arch with roll-moulding and hood mould, good C19 door with strap hinges and iron quatrefoil panel; 3-light C19 Perpendicular window above. Third stage has 3-light bell-openings with cusped lights, 2-centred arch and hood mould. Second stage east has single 4-centred arched light with hood mould and pierced slate ventilator; clock above.
Interior: Plastered walls and tiled floor. Nave, chancel and south aisle have C19 ceiled wagon roofs; in the chancel with a stencilled polychrome design. The nave has a 4-centred chamfered arch to the north transept, with inposts. 4-bay south arcade with Pevsner A-type piers and capitals carved with foliage; chancel has 2-bay south arcade with Pevsner A-type piers and capitals carved with fleur-de-lys; the hollow-moulding of the piers is carried through to the arches, and this arcade is in greenstone, not the granite of the nave arcade. Chancel has a squint to the north transept. North wall of the chancel rebuilt in C19 with a shouldered arched doorway to the vestry, string course and aumbry, the wall at the north side and east end with a geometric design in polychromatic tiles. Late C15 rood screen, open, with cusping and the top plate carved with foliage, 2 angels and a shield. The screen between the chancel and the south-aisle is probably by Butterield, with cusped arches. Both screens are painted. The north transept is used as an organ chamber. The south aisle has a doorway for the rood stair, entered from the tower. Tall chamfered 4-centred arch to the tower, with late C19 wooden screen across.
Fittings: Stone font in south aisle, probably C12; circular bowl on central shaft with four outer shafts in marble, the bowl with a chevron rim and 4 faces with shields. C20 benches with C15 carved bench ends, in the nave and aisle. Pulpit of circa 1530, with carved wooden panels. Good set of C19 chandeliers, including a brass Gothic corona lucis in the south aisle. Tiled C19 reredos. C17 slate shield of arms in the nave and the south aisle, with strapwork and ancient colour. Hatchment in south aisle of 1828, with arms of the Willyams and Champion families. The south aisle altar table is by Butterfield, with open cusped panels.
Monuments in nave: slate monument with 2 figures carved in low relief and
inscription around the border, to Henry Stephen G. and his wife, 1611 and 1630; slate monument with carved panels in low relief of foliage with hourglass, skull and crossed bones, to Thomas Coad, 1731; slate monument to Henry Beeston, 1801. In south aisle a wooden board to the crew of the "Hodbarrow Miner", wrecked at St Mawgan Porth, 1908; slate monument to Humphry Noye, 1679; marble monument on slate ground with urn, to John Willyams, 1800, by Isbell. At the east end are 6 brasses set on the floor, with figures in secular dress and 2 priests, all of C16 except one priest of circa 1420. In the tower a marble monument on slate ground with urn, to Richard Paul, 1803.
Sources: Pevsner, N.: Buildings of England: Cornwall 1970. Thompson, P. :
William Butterfield 1971.