A Grade I Listed Building in Newquay, Cornwall 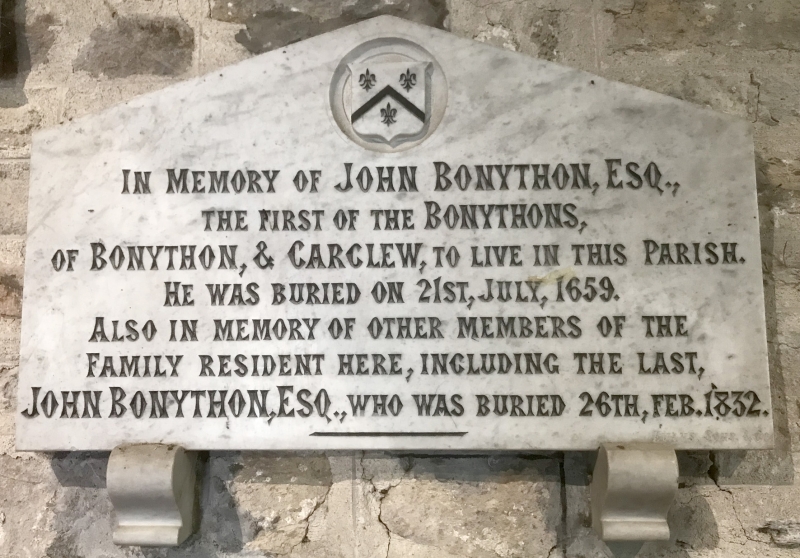 Parish church. C14, on earlier foundation. C15 alterations and additions, with
restoration of 1795 and 1884 by J.D. Sedding. Slatestone rubble with granite
dressings. Slate roofs with crested ridge tiles and gable ends with raised coped
verges to east. West tower in dressed granite.
Plan: Nave and chancel in one; it appears that the aisles were built in C14, and
altered, possibly with the extension of the aisles to the full length of the chancel,
in early C15, south porch of C15, and later west tower of C15.
Exterior: The nave is enclosed by the aisles. The chancel east end has C19 4-
light Perpendicular window with hood mould and relieving arch.
North and south aisles: each extended at the east end as chapels; both east ends
have a straight joint to the chancel and 4-light C19 Perpendicular window, with hood
mould and relieving arch. Both aisles are blind at the west end. The main range of
the north aisle has early C15 4-light window with 2 tall lights and a lower light at
each side, with 4-centred arches and hood mould. 3-light C19 Perpendicular window to
right, with C20 single storey addition. 2-light C19 Perpendicular window to west of
the addition. The south aisle is of 4 bays including the south porch, with 2 bays of
the south chapel to east. The chapel has 4-centred arched moulded granite doorway
with carved spandrels and C19 door. 3-light C19 Perpendicular window. The main
range of the south aisle has one C15 and two C19 3-light windows with cusped lights,
2-centred arch and hood mould. Slate ledger stone attached to south wall, of C17,
with carved flowers and strapwork, valedictory verses to Margaret .... 1658.
Gabled south porch: has 4-centred arched doorway, wave-moulded, with C20 double
doors. Fine slate sundial over, with gnomon, dated 1826, erected by the
churchwardens. The interior of the porch has slate floor and stone benches, C19
arched brace roof. Inner moulded 4-centred arched doorway with hood mould and C19
studded door.
The west tower is in four stages, in squared granite rubble on moulded plinth with
string courses and set-back weathered buttresses, embattled parapet with crocketed
pinnacles. West doorway has rounded arch with wave mouldings, plain round granite
vault with inner C19 double doors. 3-light C19 window above with 4-centred arch and
hood mould. Stair lancets to north. Third stage south has clock dated 1910.
Fourth stage has C15 3-light bell-openings with Perpendicular tracery and slate
louvres, 4-centred arch and hood mould. The pinnacles are corbelled out with small
carved figures at the level of the top string course.
Interior: C19 tiled floor, unplastered walls. The nave and chancel have C19 arched-
brace roof. C19 roof to aisles, except for the east chapels, where there is a C15
wagon roof with carved ribs, wall-plates and bosses, unceiled. The nave has 4-bay
north and south arcade with 2-centred arches with double chamfered orders, piers with
4 large outer shafts and four smaller inner shafts, ring-moulded capitals; the piers
at the west end and at the east end of the chancel are in Beer stone, other piers in
granite. The chancel has a J-bay north and south arcade with depressed 4-centred
arches and similar piers. The north aisle has a 4-centred arched doorway to the rood
stair, stone newel stair with upper doorway; corresponding doorway cut through the
north and south arcades. Nave has piscina in south wall. Chancel and north chapel
also have piscinas. The nave has a blocked window at the west end on the north side,
possibly pre-dating the addition of the north aisle. 4-centred tower arch, with
imposts, chamfered.
Fittings: C12 stone font in nave, circular bowl with chevron carving, 4 outer shafts
surmounted by faces and central stem. Royal Arms of Charles II in north aisle,
plaster with ancient colour, mounted on board with pediment and cherub and
pinnacles. C19 wooden chair with carved floral panel to back and scrolled top. C17
stocks in south aisle. C19 painted Gothic board in north and south aisles with
texts. In north aisle, a 1610 copy of the Breeches Bible.
Monuments in north aisle; slate monument with low relief carving of a woman, with
inscription around the border, to Elizabeth...1640; slate tablet to Richard Budd,
1787; slate tablet with fine vigorous carving in relief; of the figure of a man,
initialled RE, circa 1640. In south aisle, the paving contains re-used headstones of
C19. Slate monument to Henry Minnow, 1697, with central panel with verses and border
with floral carving.
Glass: One window with stained glass by Gibbs and Howard, 1885.
Source: Pevsner, N.: Buildings of England: Cornwall 1970.