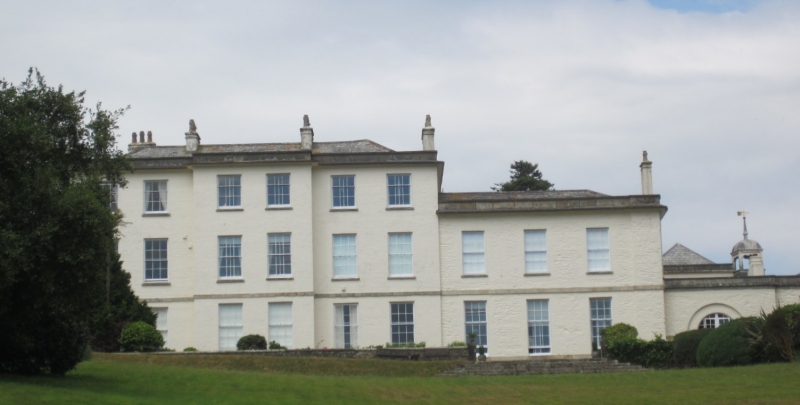 House, now in multiple occupation. Circa early C18, on earlier foundation, mostly
rebuilt in 1727, remodelled and extended in early C19, circa 1810; with additions to
rear of later C19. C20 alterations. Painted brick. Rendered stone rubble. Hipped
slate roof with lead rolls to ridge and hips. Axial stacks and renderd stafts.
Plan: Double depth plan, with central entrance and principal room to front left and
right. Stair hall to rear centre, and service rooms to rear left; further principal
room to rear right, facing the garden at the right side. There are two large service
wings, to rear right and left, enclosing a narrow service courtyard at the rear. The
front range is probably the original early C18 range much remodelled.
Exterior: 3 storeys, symmetrical 2:3:2 bays, with the centre three bays broken
forward on chamfered stone plinth with moulded stone string course above the ground
floor windows, cornice and blocking course. Central Doric portico with paired
columns to front and single columns to rear, triglyph and guttae frieze and cornice.
Inner half-glazed panelled double doors with overlight. All windows at ground and
first floor are early C19 12-pane sashes with internal panelled shutters. Some
windows are blind, blocked from within. Second floor has early C19 9-pane sashes.
The right side is 3 storeys pn basement, a symmetrical 2:2:2 bays with the two centre
bays broken forward, band course and cornice returned. The basement windows are C19
16-pane sashes. The ground floor windows are C19 15-pane sashes. The first floor
windows are C19 12-pane sashes. The second floor windows are C19 9-pane sashes.
Attached to right is the later C19 service wing of 2 storeys on basement, 3 bays, in
painted stone rubble, with granite band course. Basement has three C19 12-pane
sashes. Lower 2-storey range attached to end right at basement and ground floor
level, with screen wall attached at the end; this is in stone rubble, the wall
rendered, all with stone cornice and blocking course. The first bay has a round-
arched multi-pane window through 2 storey height, set in a round-arched recess with
stone imposts. There are three bays to right with 12-pane sashes at basement level
and 9-pane sashes at ground floor level. The screen wall has a round-arched gateway
with C20 cast iron gates and blind roundel to right and left. The left side is a
symmetrical 6 bays, with the windows arranged in pairs at ground, first and second
floors; band course, cornice and blocking course returned. Ground and first floor
have C18 18-pane sashes in exposed boxes; second floor has 12-pane sashes. The four
bays to right may be of C18 build, with segmental arches to the ground floor windows.
Basement windows have C20 casements. Attached to left is the single storey service
wing; this is rendered, with stone cornice and blocking course. There are three bays
to right and left with a central 2-storey pavilion with hipped roof. Three C20
windows to right and left; the pavilion has C20 window and door at ground floor,
lunette with C20 glazing at first floor. At the rear there is random fenestration,
with sashes of varied sizes and C20 doors. The rear yard is at basement level, paved
in stone and enclosed by a screen wall with round-arched gateway and C20 cast iron
gates.
Interior: The entrance hall has early C18 marble bolection-moulded chimneypiece to
left, with moulded mantel. Dado rail with moulded panelling; plaster cornice. To
rear, in the stair hall, there are two fluted Doric columns and pilasters forming a
screen; imperial stair with moulded wreathed handrail, stick balusters in triplets
and Greek key frieze. The ground floor rooms have 6-panelled mahogany doors. The
first floor landing has a cast iron lattice screen with fluted Composite columns.
Moulded frieze and cornice. On the first floor landing there is a central 6-panelled
door; round-arched doorway with panelled reveals to right and left. At second floor
level there are columns in the form of fasces and plaster cornice. Domed lantern
with radial glazing bars and rosette and frieze with lion masks. The rest of the
house was not accessible; some rooms are said to retain chimneypieces, but the house
appears to have been much remodelled when divided.
The manor came into the possession of the Tremayne family in 1513 and remained in the
family until C20. The Reverend H.H. Tremayne extended the house in the early C19.
Sources: Pevsner, N.: Buildings of England: Cornwall 1970.