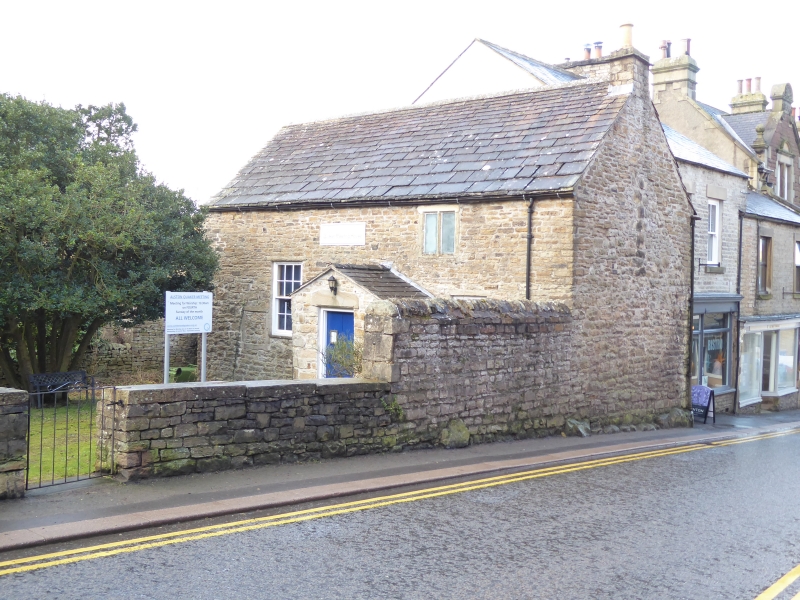 EXTERIOR: the meeting house is set within the north-east corner of a burial ground enclosed by a stone boundary wall. It is a tall three-bay, single-storey structure, built of coursed squared rubble stone, laid on a foundation course of rounded boulders that are exposed at the base of the north and east walls. All elevations display two phases of masonry construction, with the earliest at the base dating to 1732 and the finer upper courses belonging to 1764. The main elevation faces south over the burial ground and has a central gabled porch built after 1848; it is entered by a narrow double-door flanked by quoined stone jambs, beneath a re-set flat chamfered stone lintel, dated 1732. To the left and right of the porch is a pair of 12-light timber sash windows, with exposed sash boxes. Two low blocked square windows, with finely tooled surrounds are situated to either side of the left-hand window, and to the upper right of the elevation, there is a blocked two-light stone mullion window that formerly lit the loft. The east gable end is built directly onto Front Street; the outline of the original roof is clearly delineated in the fabric of the wall, and rounded stones mark the flue rising up to a short gable-end stack that has a projecting drip mould. The west gable is un-fenestrated and lime-rendered. The north elevation is also blind and is predominantly obscured by an abutting two-storey stone building. The graduated stone-flagged gable roof is drained by cast-iron guttering and down pipes.

INTERIOR: the building is divided into two principal spaces: the larger meeting room to the west and the smaller former women’s business room to the east, now an ancillary area equipped with cupboards. The meeting room is entered from the porch; the room is rectangular in plan and lit by a single window in the south wall. The walls have been plastered and painted and the south and west walls have tongue and groove panelling to dado level. The east wall is formed of vertical sliding timber panels, with a central door to the ancillary space. The raised ministers’ stand is located on the west wall, with access steps to the left and right. The stand is fronted with horizontal panelling and the fitted bench has turned front legs.

Throughout the C18 and early C19 many new meeting houses were built, or earlier buildings remodelled, with ‘polite’, classically-informed designs appearing, reflecting architectural trends more widely. However, the buildings were generally of modest size and with minimal ornament, although examples in urban settings tended to be more architecturally ambitious. After 1800, it became more common for meeting houses to be designed by an architect or surveyor. The Victorian and Edwardian periods saw greater stylistic eclecticism, though the Gothic Revival associated with the Established Church was not embraced; on the other hand, Arts and Crafts principles had much in common with those of the Quakers, and a number of meeting houses show the influence of that movement.

Quakerism was established in Alston in 1668 and the meeting house was built in 1732, with an attached walled burial ground, funded by contributions from the Friends; listed Grade II (List entry: 1144961). The local Quaker community came largely from the dual economies of livestock farming and lead mining; the Quaker-run London Lead Company had an influential role in Alston Moor as a whole, with its aims and ethos reflecting Quaker values, such as improving worker’s living conditions, and providing schooling and reading rooms. By 1762 it was apparent the size of the building was insufficient to meet the Friends’ needs. In order to enlarge the meeting house, work was undertaken and completed in 1764 to raise the height of the walls, build a gallery, and insert a new two-light mullioned window to light the loft space. Sometime later, the ground-floor mullioned windows were blocked and replaced by sash windows. In 1859 the number of members attending Meetings began to decline, so the gallery floor was removed to provide a taller ceiling in the women’s business meeting room. At about the same time, a new ministers’ stand was installed and panelling was added in the meeting room. Externally, the porch was also added around this date and a lintel dated 1732 was re-set from the original entrance. In 1902 the meeting was discontinued and the building served a number of functions. An organisation known as Toc H (a movement that emerged from a soldiers’ club in Belgium during World War I) occupied the building for a number of years, working with the community and supporting local charities. Eventually the Friends started meeting in Alston again in 1972, as a result of new Friends moving into the area. In 1996 the building was refurbished with external repairs, a new toilet, and kitchen facilities were added in the former women’s meeting room.

* a rare survival of an early Friends meeting house, exhibiting the character of a modest simplicity of design, reflecting both the traditions of the Quaker movement and that of local vernacular buildings;
* the alterations carried out in 1764 to increase the capacity of the meeting house are evident in the fabric of the building and add to its special interest;
* the interior survives well and retains timber fittings including the ministers’ stand and fitted bench seating, dado panelling, and a vertical sliding timber panel wall.

* an early-C18 meeting house that served a long established Quaker meeting that dates back to 1668, 21 years before the 1689 Act of Toleration.

* the building benefits from a functional and spatial group value with the listed Grade-II burial ground walls.