The Cloisters, Including Railings and Gates 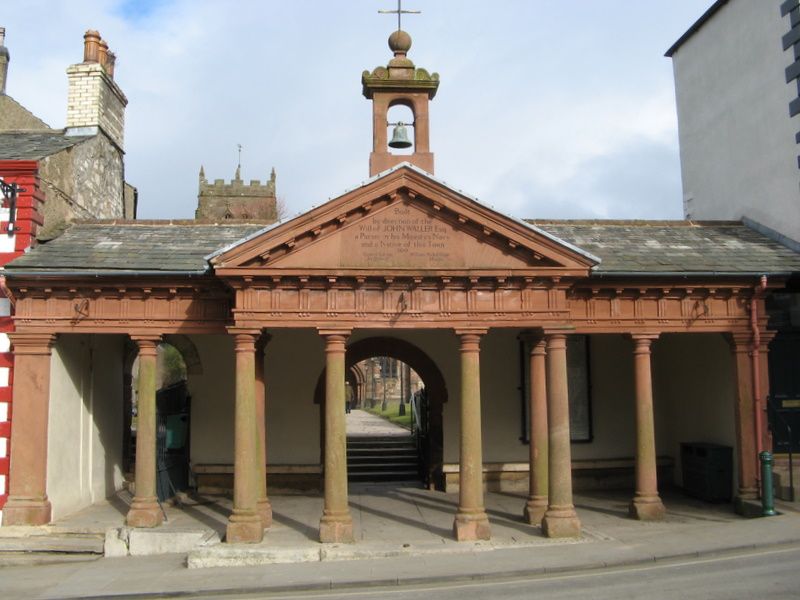 Entry Name: The Cloisters, Including Railings and Gates

Portico entrance to churchyard, dated 1810. George Gibson architect and William
Richardson mason. Graduated slate roof. 8 unfluted Roman Doric columns on
plinth blocks, with antae to either end, carry a pedimented entablature; the
central 4 columns stand forward of the rest and the triangular pediment which
they support has a dated inscription. The stone bellcote to the apex has a
cornice with scrolled supports to the ball and cross finial. Stone bench to
rear wall with market charter board above. Contemporary cast/wrought-iron
railings and gate to west side survive. The pointed standards are set
diagonally; the finials and gate-posts have capped inverted bells with lobed
bases. The tops of the gate's end-posts are scrolled. The double gate to the
church on the north side survives, with fleurs-de-lis standards to top and lock
rails; Vitruvian scroll frieze to the top rises towards the centre-post which
has a spearhead finial with small scrolled fronds. The tops of the gates end-
posts are scrolled.