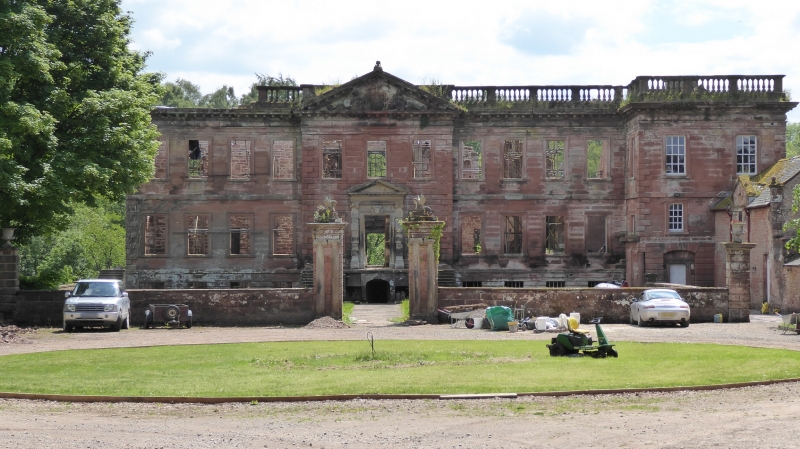 Tudor wing of High Head Castle, partly incorporated in C18 wing, now in ruins.
Mid C16 for the Richmond family with C19 and C20 alterations, partly destroyed
by fire in 1956. Thick red sandstone rubble walls with eaves cornice and
parapet; without roof. 2 storeys, 5 bays. The present facade, originally the
rear, without doorways; the left open doorway is therefore C20; and 2 C19
doorways are now blocked to form windows. 4-light hollow-chamfered
stone-mullioned windows, with rounded heads, under hoodmoulds; the small
chamfered-surround windows are apparently C20 and ground-floor 2-light matching
windows (in former doorways) are also C20. A right ground-floor window has been
completely removed leaving an open arch, partly covered by a small ruined
lean-to washhouse/outhouse which is probably C18 but on earlier foundations.
The former facade was completely plastered over when the C18 wing was
constructed and formed an internal dividing wall. Now the building is in ruins,
the plaster falling off, revealing blocked 4-light chamfered windows and a panel
of Richmond arms. A central staircase has been knocked through. The interior
is partly filled with fallen rubble but retains some window seats and fireplace
recesses. Whilst an integral part of the C18 Castle this was originally a
free-standing building and should anything happen to the C18 wing, then this
would revert to its original form and be the only visible remains of the
medieval castle. See Transactions Cumberland & Westmorland Antiquarian &
Archaeological Society, new series, xi, 379-384.