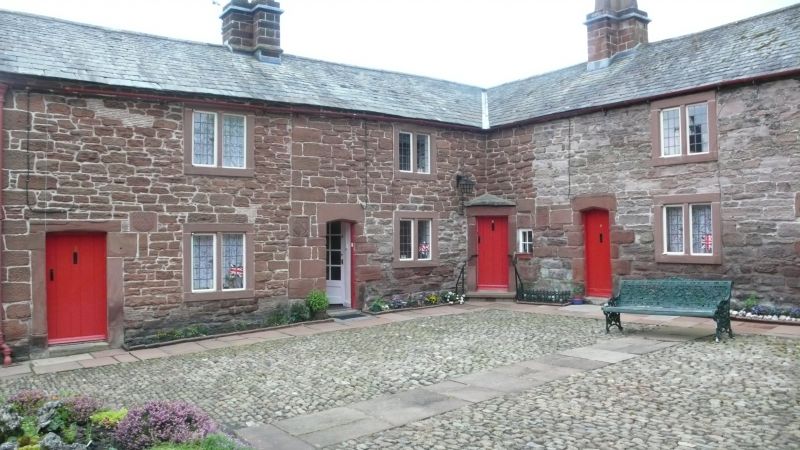 Almshouse, including a chapel and former communal hall, founded 1651-1653 by Lady Anne Clifford.

PLAN: four ranges set around the sides of a cobbled courtyard with a central western entrance, and an off-centre opening through the east side into a garden.
EXTERIOR: the building is situated on Boroughgate, the main medieval street of the town, on a site that slopes steeply to the north. Forming 13 houses and a chapel, it comprises low two-storey ranges constructed of red sandstone with ashlar dressings beneath hipped roofs of slate with regularly-spaced stone ridge chimneystacks.

The west elevation facing Boroughgate has two storeys and seven bays, the central bay with a chamfered segmental-headed archway, with a sandstone panel bearing Lady Anne's arms and those of her mother. The three bays to either side of the entrance have a ground and a first floor window opening within plain stone surrounds, all fitted with timber eight-over-eight unhorned sash window frames; some of the present windows retain evidence of earlier surrounds with long and short jamb stones. The right return has seven regularly-spaced first floor windows in plain stone surrounds fitted largely with two-over-two sash frames, and similar windows to the ground floor, some set within earlier openings. The rear garden elevation is lime-washed with window openings in plain stone surrounds, many of which are replacements. The former communal hall at the south end (now a cottage) is lit by a two-light mullioned window to the ground and first floor, the latter also with a single narrow light, all with leaded glass. A pair of houses to the right have a single ground floor window and a pair of windows to the first floor. Window frames are mostly single or four-light, late-C20 replacements. There is an off-centre entrance through a plain wall with an attached lean-to extension, occupying the site of a demolished house, and to the right another house similarly lit to the others. The chapel occupies the corner and is lit by a two-light round-arched mullioned window with leaded glass.

The main west entrance enters into a full-width passageway that opens into a cobbled and paved courtyard with a water fountain at its centre, around which are set the four ranges (divided into 13 houses and a corner chapel). Each house has an entrance with either a flat or a four-centre-arched head, fitted with a boarded door; those with four-centre arches have long and short jamb stones. The houses mostly have a two-light flat-mullioned window to each floor, though those in the north range have single-light windows to each floor and those in the west range have a simple small window to each floor. Windows are mostly fixed or casements with leaded glass. By each door are carved shields of arms indicating the alliance of various noble families with the Viponts and their successors the Cliffords. To either side of the inner courtyard entrance are displayed the arms of Lady Anne's two husbands impaling her own.

INTERIOR: the houses each have a simple plan-form consisting of a ground floor living room/kitchen and a first floor bedroom and bathroom. One house was inspected internally and had a fire breast to one wall, a substantial, chamfered ceiling beam, a simple staircase and the remains of a truncated roof truss tie-beam.

The chapel has a stone-flagged floor and a segmental plaster ceiling. There is a simple C17 panelled reading desk in the north-east corner, and there are C17 boarded benches with simply shaped ends to the sides, and shaped rails to the front. The walls are painted plaster and have a series of monochrome wall paintings with red text references. To the west wall are the Ten Commandments within paired round-headed panels. The north and south walls have texts set within rectangular panels, including the Apostles' Creed, the Lord's Prayer and the Beatitudes. The paintings to the east wall represent the Crown of Life and the Crucifix in glory above the adoring cherubs of the Day of Judgement. It is considered that those to the rear and side walls are C18 replacements of almost obliterated originals, while the design of those to the east wall may be earlier.

Anne Clifford, countess of Pembroke, Dorset and Montgomery (1590-1676), was born at Skipton Castle, North Yorkshire, the daughter of George Clifford, 3rd Earl of Cumberland and his wife Margaret. She was educated by her mother and her tutor Samuel Daniel, developing a love of literature, history, the classics and religious works. After her father’s death she spent much of her life in a long and complex legal battle to obtain the rights of her inheritance. Her fascinating story is known through her diaries and can be told through several historic places. In 1643 Anne did regain the Clifford family's lands after the death of her cousin. After the Civil War, in 1649, when she was 60 years old, Anne moved back to the north. She spent the next 26 years of her life restoring the mostly ruinous family castles to their former glory (Skipton, and the Cumbrian castles of Pendragon, Appleby, Brough and Brougham). She also restored several churches in the region and after she was widowed a second time in 1650 she decided to make provision for other widows who were prevented by age or infirmity from supporting themselves, and built an almshouse in Appleby. Lady Anne died in 1676 at Brougham Castle, in the room where her father had been born and was buried in the vault she had built for herself in the Church of St Lawrence, Appleby.

The almshouse at Appleby, known as St Anne's Hospital, was founded in the mid-C17. Its foundation stone was laid in 1651 on land purchased by Lady Anne from George Bainbrigg. Provision was made for the accommodation of twelve sisters and a Mother, the latter to be responsible for general administration in accordance with a set of rules, which included attending prayers each morning in the chapel. The two buildings to the north-east and south-east corners of the courtyard are larger than the others, that on the north-east being a chapel and the other a common hall. Each occupant had a garden area to the rear of the complex. The houses remain lived in by single women.

In the mid-C19 various alterations were made: the fabric may have been raised and the tie-beams of the roof trusses were removed to create greater height, providing each house with a first-floor bedroom, the main entrance was renewed after the fashion of its predecessor, and one of the houses (number six) was demolished to create a wider opening from the courtyard to the rear gardens; the former communal hall was converted to a house by way of replacement. In 1961 the houses were altered and repaired to accommodate a bathroom and toilet and new kitchen facilities. In the late C20 due to spalling stonework, the east elevation of the complex was rendered in limewash and sash window frames were mostly replaced with metal-framed casements with leaded glazing. Other exterior walls were re-pointed with lime mortar.

* an early, purpose-built almshouse that, despite inevitable minor later alterations, remains largely intact and whose function is clearly legible;
* its traditional formal plan-form resembling a cloister or college quadrangle is retained, as are the original simple plan-forms of the individual houses;
* its overall form reflects the character of early almshouses, with a chapel to project the piety of its benefactor and incorporating prominent heraldry to signal its secular status;
* its vernacular styling is attractive and has resulted in a handsome and well-detailed building;
* the original chapel retains a suite of C17 fixtures and fittings and a series of C17 and C18 monochrome wall paintings.

* associated with the determined Lady Anne Clifford, whose fascinating legal battle to obtain the rights of her inheritance is known through her diaries and reflected in several historic places, including this one that bears her name and arms.

* it benefits from a spatial group value with numerous and diverse listed buildings in the vicinity, including Lady Anne's family seat of Appleby Castle.