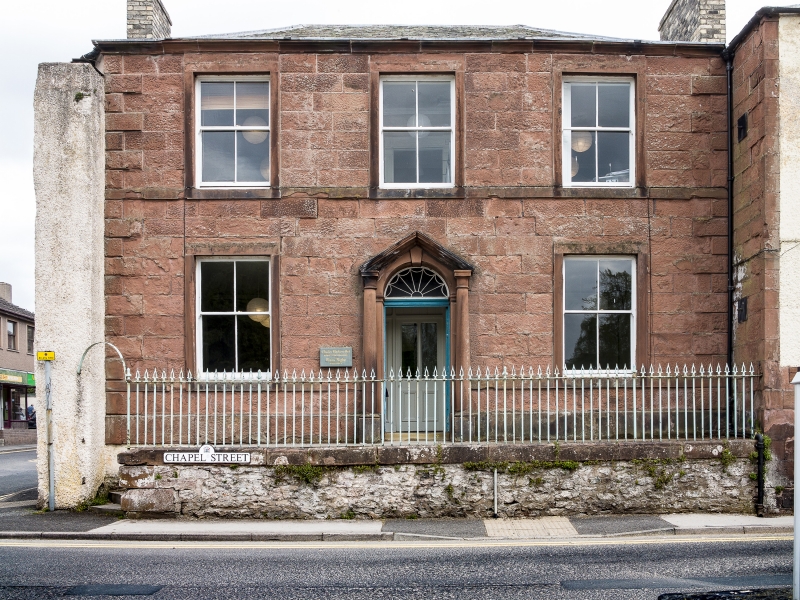 EXTERIOR: a two-storey, three-bay building with partial basement, under a hipped roof of slate and with tall, brick end chimneys. There is a moulded eaves cornice, long and short quoins, sill bands to ground and first floor and a plinth. The central round-arched entrance has engaged Tuscan columns and an open pediment with a semi-circular fanlight, fitted with an original six-panel door. This is flanked by replacement, horned four-light sliding sash windows in plain sandstone surrounds, and there are three similar windows to the first floor. A stone access stair and pavement lie parallel to the front elevation. The left return is blind. The rear elevation has a round-headed window with Y-shaped Regency glazing bars and panes of crown glass, and the narrow, projecting range has a blocked carriage arch in its south side, and a blocked window in the east side, the latter cut by an inserted C21 window. The short, L-shaped stone wall attached to the south-east corner of the rear projecting range is not of special interest and is not included in the listing.

INTERIOR: the original plan of four principal heated rooms over two floors, set to either side of a small stair hall remains intact. There is an original, unified timber and plaster classical decorative scheme to both floors within the principal rooms and stair halls. This consists of reeded architraves with blocked corners embellished with rosettes and acanthus leaves to all window and door openings, moulded cornices, some with rosette motifs, fluted dado rails, skirting boards, shutters to windows with panelled soffits and four original six-panel doors, many with original door furniture. Fireplaces remain to three of the principal rooms. There is an early C19 stone fireplace to the ground floor north room with an inserted late C19 tiled grate, and round-headed built-in cupboards with classical decorative moulded surrounds with similar detailing to the architraves. Access through the east wall leads to the rear range occupied by a strong room by Chubb and Sons Lock and Safe Co Ltd; its door retains original door furniture including locks and the makers' name plate, and an early handwritten paper shelving schedule, listing all of the firm’s clients, is attached to the inside. The south ground floor room has plain built-in cupboards lining one wall, and a cellar (now accessed by a hatch from the adjacent 33A Chapel Street) with a stone-flagged floor, numbered stone-slab storage shelves, a blocked, narrow splayed window and part of a stone, quarter winder stair. The stair hall has an under-stairs cupboard with ornate decorative moulded surround and fanlight, and there is a similarly styled timber stair arch.

The central open-string bracketed stair rises over two flights around a half landing with four unusual quarter winders; a slender moulded newel rests upon the bottom step. The stick balustrade has a simple handrail that ramps and wreaths around the half landing, and each tread has half-round nosing above a cavetto. The window lighting the stair has panelled soffit and reveals. There is a Regency-style fireplace to the first floor north room and similar built-in cupboards to those of the room below; access is also gained, through a re-used plank and batten door, to the first floor of the rear range which is fitted as a kitchen. The first floor south room has an early C19 dark marble fire surround and a full-height segmental-headed alcove with decorative surround matching the overall decorative scheme.

33 Chapel Street is considered to have been constructed during the early C19, and is present on the Tithe map of 1843, with John Heelis listed as an occupier. The building is believed to have been constructed by the locally prominent Heelis family, for the firm of attorneys Briggs, Hall and Heelis, of which Heelis was a partner. It has been suggested that the building was constructed in 1812, and stylistically it is consistent with this date. The internal layout of four principal rooms, all with consistent Regency detailing, suggest it was not a domestic premises and that it was constructed as a purpose-built office building; it may have provided three offices for the partners and one office for the clerks or clerk. Its ownership and occupancy from the second quarter of the C19 can be traced without interruption until the mid-to later C20 as the business premises of successive generations of the Heelis family. The narrow rear range was formerly a separate building, which in about 1890 was incorporated into number 33 and its ground floor converted to a strong room. During the mid-C20 the fireplace was removed from the ground floor south room and a doorway inserted through the chimney breast to incorporate the adjacent 33A Chapel Street into the office premises; the opening has been blocked subsequently. In the early C21 the first floor of the rear range was converted to a kitchen.

The Heelis family were a long-established Westmorland family serving as agents, at Appleby Castle, to the Earls of Thanet, clergy and as solicitors, the latter role continuing with the establishment of the firm E and E A Heelis in 1885. However, the family is better known today for its connection with Beatrix Potter, thanks to the marriage of William Heelis (of W H Heelis Solicitors of Hawkshead) to Beatrix Potter in 1908. William Heelis was the brother of Edward Alexander and George Herbert Heelis who ran the family firm of E and E A Heelis at 33 Chapel Street. Both Edward Alexander and George Herbert Heelis resided in Battlebarrow House (or The Green), Appleby which Beatrix Potter visited on special occasions. However, there is no record of Beatrix Potter visiting her brothers-in-law’s place of business on Chapel Street.

33 Chapel Street, an office building of early C19 date, is listed at Grade II* for the following principal reasons:

* a rare, early C19 example of private purpose-built offices, usually considered a development of the Victorian age with the exception of the legal chambers in London's Inns of Court;
* for its attractive external qualities including the use of quality local materials and Classical detailing seen for example in the pedimented doorcase;
* for its virtually intact, extensive and refined interior, notably the exceptional joinery, which unites the decorative scheme throughout the building.

* constructed for the regionally significant Heelis family, solicitors and agents to the aristocracy.

* it benefits from a historic and spatial group value with the attached Grade II-listed 33A Chapel Street, and with numerous other listed buildings of a similar date in Chapel Street and adjacent areas.