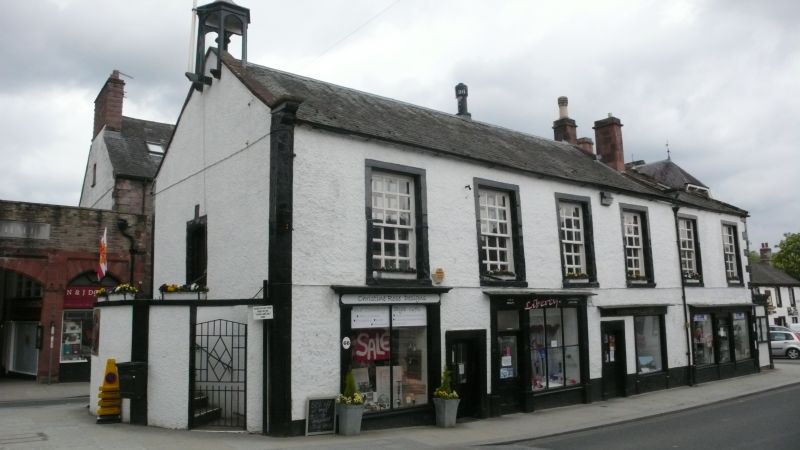 PLAN: a linear-plan roughly oriented north to south on an island site at the north end of Boroughgate, the principal medieval street of the town. The building comprises an original principal south range and a rebuilt north range abutting the former gable of the latter.

SOUTH RANGE: two storeys beneath a pitched roof with a ridge ventilator, coped verges, kneelers, quoins and a single chimneystack on the east pitch at the north. The south gable contains the entrance to the first floor hall, with a chamfered stone surround and a four-centred arched head. A re-set date stone above bears the date 1596. Its oak-boarded door is set in a renewed C20 frame with reused C17 or C18 strap hinges. At the apex is an open-sided, hexagonal bellcote retaining a single bell dated 1893. The first-floor doorway is reached by a C20 external stone stair concealed behind a semi-circular screen wall with flat pilasters, stone coping and a moulded red sandstone panel with a raised quatrefoil containing a moulded and painted shield bearing the three leopards from the Royal Arms and incised with the date 1179 (the date of the town’s first borough charter). The east elevation has three late-C19 ground-floor shop fronts and doorways, all with rendered stall risers. The most southerly has a doorway with reeded stone pilasters with plinth blocks and stylised floral paterae fitted with a four-panel door, and there is a separate shop window to the right; a plain timber fascia extends above both the window and door. The central unit has a door and a taller shopfront all with matching pilasters, fascia and cornice, and a shop window divided by glazing bars. The most northerly unit has a narrow door with a moulded timber architrave fitted with a four-panel door; the separate shop window has plain pilasters, fascia and cornice and simple mouldings. To the first floor there are four regularly-spaced nine-over-nine early-C18 unhorned sash windows with ovolo-moulded glazing bars and plain architraves. The west elevation ground floor has an irregular pattern of small windows and two narrow doors including an early-C19 sixteen-pane bow window with slender glazing bars. The shop doors have four-centred arched heads and chamfered surrounds, one fitted with a late-C19 part-glazed door. To the first floor is a pair of widely-spaced 18-pane sash windows similar to those of the east elevation.

NORTH RANGE: two bays and three storeys with quoins beneath a hipped roof. The north gable has a pair of first-floor later-C20 six-over-six sash windows in plain architraves, above a C20 full-width, single-storey, flat-roofed porch extension with timber classical-style detailing. An historic brass plaque inscribed ‘Town Clerk’s Office’ is fixed to the wall on the west side of the central doorway. The east elevation has an early-C19 double shop-front with a central doorway, framed by moulded timber pilasters with classical detailing. The first floor has a pair of mid-C19 windows with late-C20 18-pane sash windows. The fenestration of the west elevation is also late C20, comprising two pairs of small sash windows to each floor with a large 12-pane sash stair window.

SOUTH RANGE: the ground floor is divided into three shop units, the south and centre units connected by an inserted C21 doorway and the northern unit connected to the ground floor of the north range by an inserted late-C20 doorway. There are four original, chamfered, oak first floor ceiling beams of heavy section with deep chamfers, most with plain chamfer stops. Their soffits retain evidence of former shop partitions and one has been modified to allow for a doorway. A stone-flagged floor is retained to the southern shop, which also has a blocked alcove in its south wall thought to be a former doorway. The central shop has a late C19 or early-C20 two-register wall cupboard with sliding glazed or panelled doors, and within another cupboard first floor floorboards and a lime-washed section of oak beam are visible. The shops have modern finishes, with some early-C20 tongued-and-grooved boarding to window reveals.

The first floor council chamber is separated by a timber partition from an adjoining mayor’s parlour to the north. The chamber is entered through a C19 lobby with a panelled inner door with chamfered details and brass fittings. Its north wall bears a First World War Roll of Honour, and to either side are alcoves with 1920s lath-and-plaster canopies; that to the south-east retains mid-C19 historic wall surfaces including ashlar-scored textured plaster and high-level moulded picture rails. The north wall of the chamber has wainscot panelling with a carved frieze of late C16 or early-C17 inter-laced strapwork. At the east and west ends there are oak-panelled doors, and above is a full-width former gallery supported on a pair of C19 fluted timber posts. The walls are plain plastered and scored with lines to resemble ashlar, above an applied dado of Lincrusta-style embossed paper, and they and the window reveals are fitted with early-C20 oak picture rails in three tiers. The ceiling has inset square ventilation grilles and three exposed tie beams with applied timber details. The wooden floorboarded floor is retained. The mayor’s parlour has an inserted ceiling, above which an earlier lath and plaster ceiling remains and there are two blocked windows on the former north gable end. The parlour room fittings are largely 1920s in date including oak-panelled doors, oak panelled dado, picture rails and a pendent light fitting. The south wall has shallow cupboards with oak panelled doors; the east door is a re-used section of C17 panelling. The five-bay roof has four collar and tie beam oak trusses with two tiers of purlins per pitch and a diagonally-set ridge. The trusses show evidence of reuse, probably dating from when the roof was raised. There are two phases of assembly numbers on the north faces of the trusses. The trusses are hand-finished and pegged and the rafters are also of oak; the northern and southern trusses have cambered collars. Within the roof space the timber partition between the chamber and the mayoral parlour is visible infilled with hand-made bricks.

NORTH RANGE: refurbished internally in 1970 with late-C20 fixtures, fittings and finishes throughout. The ground floor serves as a Tourist Information Office and the first and second floors serve as offices and storage respectively.

The Moot Hall was built in the late C16 to conduct the business of the Borough of Appleby, which was established by royal charter in 1179. The exact date of the building's construction is unrecorded, but a carved datestone above the south gable first floor doorway bears the date 1596 and the initials RAW (now eroded but recorded in 1934). The earliest historical reference to the Moot Hall is a record in the accounts of 1610 of a payment for the ‘mending of the Mute hall glass windows’, confirming that the building existed by then, and that it had been standing long enough to need repairs. Recent dendrochronological analysis of the oak roof trusses indicates that some of the timbers were felled between 1571 and 1596. This is broadly consistent with the re-set date stone. The internal details of the roof and the masonry of the south gable indicate that the eaves and the roof were subsequently raised (reusing the original trusses), probably during the second half of the C17 when accounts record significant expenditure and refer to a ‘newbuilding’. Tree ring analysis of a sample from the south beam in the ground floor gives a felling date of AD1660, which might relate to this ‘newbuilding’. The earliest cartographic evidence for the building is the 1754 plan of Appleby (annotated ‘Moot Halls'), which depicts it as a principal south range with a smaller north range and outbuildings attached to the south gable.

The building, which originally comprised an upper hall and a ground floor hall, has been in continuous use for its original purpose of administrating the borough, and remains in that use today (2019). During this time it has acquired new functions and undergone various alterations. From the 1670s to 1773 the Westmorland Assizes were held in the upper hall, as were coroner’s inquests and other meetings. In the early C18 large sash windows were inserted to the first floor hall, in the second half of the C18 the ground floor hall went out of use and became divided into shop units (the present shop fronts date from the late C19), and in the early C19 the north range was rebuilt to provide an east-facing ground-floor shop, with space for the council’s weights and measures and weight bridge mechanism, with living accommodation above. Trade Directories provide details of the shop occupants from the mid-C19 onwards, and include a bicycle shop, a chemist and a greengrocer, fishmonger and tea agent. In 1886 a set of stone steps and outbuildings to the south gable were replaced by an iron staircase.

During the early C20 the first floor chamber and adjacent mayoral parlour were refurbished, and a screen wall and renewed external stair were added to the south gable. The north range was remodelled in 1970 to provide Town Clerk’s Offices to the ground and first floors, which included the replacement of a late-C19 open-fronted shelter with a flat-roofed porch. In 1995 the ground floor office of the north range was refurbished to provide a Tourist Information Centre, and the more northerly shop unit in the south range was linked to it and remodelled as an exhibition space.

Appleby Moot Hall, of late-C16 date with later alterations, is of more than special interest and is listed at Grade II* for the following principal reasons:

* originating in the late C16, it is one of the earliest purpose-built moot halls in England constructed in a masonry, vernacular style;
* it retains a significant proportion of original fabric including a four-centre-arch headed entrance and a hand-finished and pegged five-bay roof structure;
* the original plan-form of first floor meeting room and ground floor hall is largely retained and where alterations have occurred, the original configuration of spaces is legible;
* it retains a number of historic fixtures and fittings including a carved late-C16/early-C17 frieze, that clearly express the hierarchy of function within the interior spaces;
* inevitable C17 to C19 alterations, including the provision of early-C18 upper windows and a group of well-detailed C19 ground floor shop fronts, contribute to the overall level of interest.

* a building type that along with others influenced the design and form of the emerging municipal town halls of the C19;
* one of only a handful of early town halls that still serve their original purpose of conducting the business of the borough.

* it benefits from a spatial and functional group value with numerous and diverse listed buildings in the vicinity.