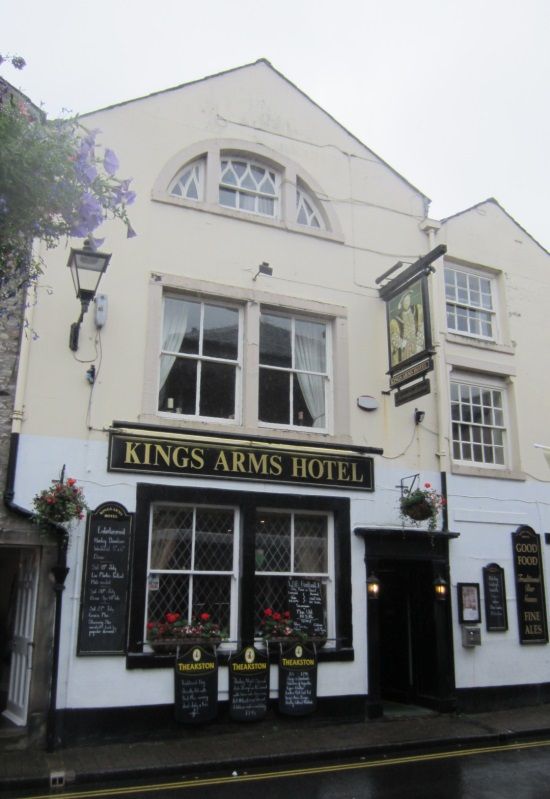 2.
C16 or early C17 inn, refaced C18, now three properties. Three storeys. Rubble,
Nos 5 and 7 plastered. Slate roof. Five chimneys. Irregular facade of four gabled
bays to street with addition to right hand side over yard entrance. Quoins to left
hand side. Third bay is narrower than the others and has windows with sills and
plain reveals. The others have windows with plain stone surrounds, tripartite to
first and fourth bays, coupled to second bay. Those to No 7 sashed, to Nos 5 and 9
sashed with all glazing bars. All three gables have Docletian windows with ogee
glazing bars. No 7 has a doorway with wooden Doric pilasters and entablature.
Heavily studded plank door. Doorways to Nos 5 and 9 have plain stone surrounds and
modern doors. No 9 has C19 shop window with plain surround and cornice. Modern
glazing. End wall left hand side (facing east) has on first floor one three light
stone window with chamfered surround and mullions. At rear one four light window
with moulded mullions and round heads to lights, probably C19, recently inserted on
ground floor of No 7 and said to have come from a church at Skerton near Lancaster.
In gable of No 9 one wooden three light window.
Interiors. No 5 has exposed beams and heavy collar roof. No 7 has a wattle beck
partition to left of front door. Massive C16 or C17 segmental headed fireplace with
ingle nooks and recess for spice cupboard. On first floor one muntin and plank
partition and one C17 panelled partition. No 9 on ground floor at front has early
C18 chimneypiece with cornice. Back room has built-in cupboards with raised and
fielded panels. C18 four flight closed string dogleg stair and landing. Turned and
square newels, turned balusters, moulded hand rail and string. On first floor
mid C18 chimneypiece in front room. Muntin and plank partition on staircase. Outline
of he cambered truss on corbel visible in attic (roof of No 7 said by RCHM to be
similar).
Although an inn since Cl7, this group was built as the manor house of the town, with
a recessed centre and wings. It has suffered severely since 1934 when RCHM reported
two five light windows at rear and a moulded C17 ceiling. (Annals, RCHM).