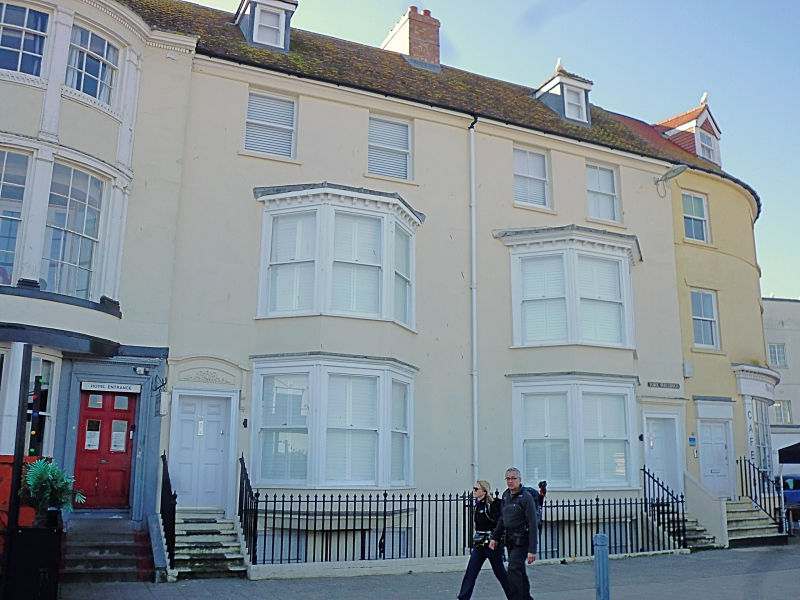 Pair of houses, now in one occupation, part of an original
terrace of 7 houses. c1785 (RCHME), modified mid C19.
Rendered, tile roof.
3 storeys, attic and basement. Each has a tile hipped dormer,
with sash to No.56 and early 2-light casement to No.57, above
plain sashes, 2 at second floor, and 2-storey bold canted
oriels, with low-pitched lead hipped cappings and modillion
top cornice; set back in the main wall plane are 2 sashes to
each basement. To left and right on 6 steps are original
panelled doors. The basement areas are enclosed by spearhead
railings, returned at the ends and centre, but with low coped
wall to the extreme right.
The right return, with double gable, is plain, and the rear,
in New Street,is mainly in unrendered brickwork, with a
mansard roof slope with dormers, and sashes with bars in
moulded flush boxes; two 4-pane, two 12-pane, and a stair sash
with margin panes. There is also a low 2-storey gabled service
wing.
INTERIOR: not inspected.
There were originally 3 houses here, but the end property has
been demolished. In detail they were probably similar to No.51
(qv), but the fronts modified later.
(RCHME: Dorset, South-East: London: 1970-: 354).