A Grade I Listed Building in Irnham, Lincolnshire 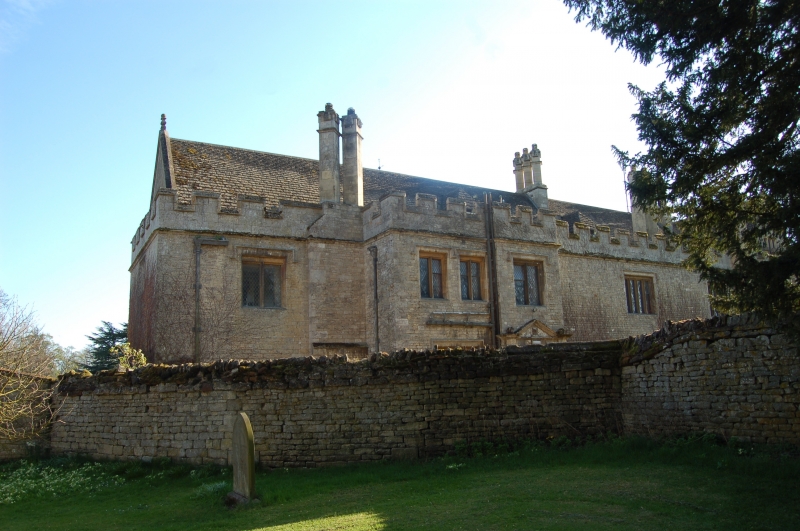 Country house. c.1200, C14 for the Luttrell family, early C16
rebuilding by Sir Richard de Thimleby, alterations of 1765 for
the Conquest family, late C19 alterations following fire in north
wing of 1887. Coursed squared limestone rubble with ashlar
quoins and dressings. Ashlar, Collyweston slate and slate roofs
with raised stone coped gables and finials. Numerous diamond and
square C19 ridge and wall stacks in groups of twos and 3, and a
single circular stack with moulded top to west range, relict from
the early medieval house. L-plan, with screens passage and Great
Hall. 2 storey with attics and cellar, 7 bay front, left hand 3
are advanced, embattled parapet, stepped buttresses throughout.
Central C16 moulded semi-circular archway flanked by Doric
pillars with strapwork bases supporting pulvinated frieze and to
right side is a similar blocked opening into the porch, which
covers an inner panelled door with fanlight set in a stone
surround with C14 wave moulding and now mid C19 semi-circular
head. To left of doorway are single C19 4 and 3 light windows.
To the right a pair of C16 3 light windows with beyond a canted 2
storied bay window and a further 4 light window. To first floor
are 4 three light windows and 2 of 4 lights. Behind the parapet
are 4 steep stone coped gables above the hall, each containing a
3 light window. In the angle between the fronts is a facetted
projection with single 4 light windows to each floor. At the
centre of the south front is a 3 storey facetted tower, with
single 2 light windows to each floor. To either side are single
canted 2 storey bays containing 2 light windows and to each floor
are 4 tall C19 3 light windows. All windows are mullioned and
have 4 centred arched heads to the lights, moulded surrounds and
hoods. To the rear of the north wing is a fine C16 stone door
surround comprising a pediment supported by square Doric columns
with ball finials, a pyramidal jewel at the centre of the
pediment. Interior. At the end of the screens passage a C14
pointed doorway with 2 orders of sunk wave moulding. To the side
wall 2 single chamfered C16 arches to service range. The
gallery floor over has C16 moulded beams with run out stops. The
hall has largely been remodelled mid C19, the ceiling in 3 gables
with painted plaster panels, C19 moulded beams on carved
brackets. First floor musicians gallery and long gallery on
front, C19 linenfold panelling. The bay window has original C16
moulded stone surround with canted moulded girder with carved
central motif. The service area has chamfered and stopped beams.
The back stairs C17 with turned balusters, knopped newels and
moulded handrail. The roofs are clasped purlin. In the roof can
be seen the top of the c.1200 chimney stack which bears the
circular shaft. This has chamfered weathering courses and the
scar of an earlier gable showing that it predates the existing
roof. The base of this chimney stack with chamfered plinth can
be seen in the C17 cellar. In the attic chamber near the chimney
is a good quality C16 fireplace with 4 centred head, moulded
surround and cornice. In the Middle Ages Irnham was the
possession of the powerful Luttrell family. Between 1320 and
1340 Sir Geoffrey Luttrell commissioned a Psalter, now housed in
the British Library. The brass of his son, Andrew, is to be
found in Irnham Church.