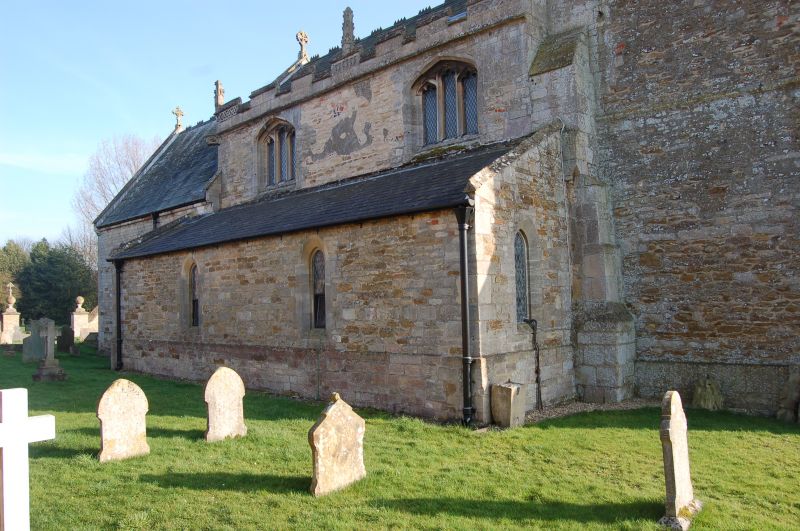 Parish Church. C11, C12, C15, 1702. Restored 1861-2 by Charles Kirk.
Coursed ironstone and limestone rubble, limestone ashlar, Welsh slate
roof. West tower, nave, north aisle, chancel, south porch.
C12 west tower of three stages, coursed rubble, with C15 ashlar
diagonal buttresses. C12 window on south side, C15 three light window
on west. C12 double belfry openings in top stage with Saxon-type mid
wall shafts and monolithic arched heads with volute capitals. C15
castellated and pinnacled parapet with gargoyles at angles. C15 triple
clerestorey lights in north wall of nave with chamfered and moulded arches,
large gargoyles at eastern angles. Nave roof is embattled with
pinnacles, the parapets having panels containing cusped lozenges and
shields. North aisle rebuilt in coursed rubble in C19, lit by pointed arches
North wall of chancel has one ogee-headed C15 window and two C19 windows,
decorated eaves cornice. East wall of chancel rebuilt in C19. South
chancel wall has an inscription on a common wall stone recording a
restoration of 1702. One double C19 light and a recut C12 round-headed
window, a further ogee-headed window balances that on the north side.
South wall of nave in coursed limestone rubble with C15 stepped buttresses.
One C12 round-headed window with half roll hood mould and a restored C14
two-light window with cusped trefoil heads and human mask label stops.
South porch is C19 in limestone ashlar with cross fleury on the gable.
South door has a restored Saxon lintel with standing figures of saints under
an architectural arcade. Above is a C12 tympanum with a billet moulded
hood mould, a double order of star motifs and a central panel filled with
diagonal trellis lines. The central parts of the lintel and the
tympanum were cut by the insertion of a pointed arch during the C13, but
this was removed during the C19 and an approximation of the original
design substituted.
Interior: North arcade of two bays supported by single early C12
circular pillar with scalloped cushion capital and square abacus, responds
are half columns with partly restored scroll mouldings. Arches have one
step and a chamfered inner arch; at the east end of the arcade, traces of
an earlier arch may be seen. Tower arch restored in C19 but reusing some
original C12 materials, including some voussoirs and probably the capitals.
Arch of three orders, outer double billet moulded, middle roll with
deep chevrons, and an inner step with angle rolls. Two nook shafts on
either side with shallow carved leaf and patera capitals, imposts continue
as a stringcourse across the west nave wall. Nave roof C19 resting on
8 C15 corbels, presumably reset; representing 4 musicians, 2 big cats,
1 grotesque and a George and Dragon, three have grotesque masks on the
undersides. The chancel arch is flanked by two C15 double lights with
flat heads. Although largely a C19 restoration, the half shafts of
the chancel arch are C12, as are the capitals with cable moulding, stiff
leaves/feathers, volutes and human masks. South wall of chancel has
stained glass window in marble lined opening dedicated to Henry Cecil
Thorold, k. 1902, S. African War, glass by Kempe, as is the east window
of the chancel. Fittings date from restoration of the church by Charles Kirk
1861-2. Monument on north nave wall to Sir John Thorold d. 1716 with two
draped standing figures with a scrolled cartouched above, by William Kidwell.