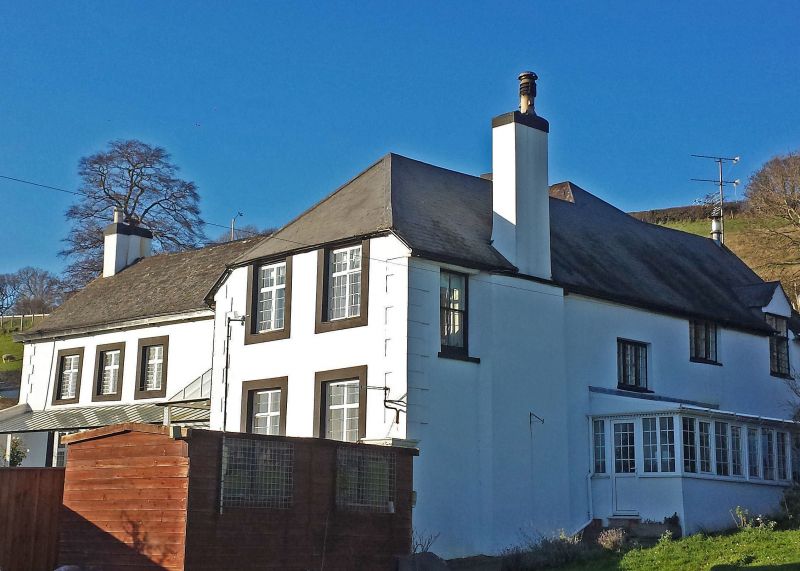 9/16 Wear Farmhouse and kitchen garden
walls to the north
23.8.55 (formerly listed as Wear)

Farmhouse. Probably early C17 with late C17/early C18 remodelling, although the
origins of the house may be earlier. Rendered stone ; slate roof, gabled at left
end, hipped to front of right crosswing ; main block with left end stack and
projecting rear lateral stack, projecting stack to crosswing, end stack to kitchen
wing.
Plan: Courtyard plan. Single depth south-facing main range, overlooking the Teign
estuary, with 2 principal high quality rooms, one on either side of a through
passage, crosswing at the right (east) end. A north wing, at right angles to the
main range (rear left) contains the stair and a service room with a kitchen wing,
parallel to the main range and external to the courtyard, adjoining on the left
(west). The courtyard, behind the main range, is enclosed at the back by a very
altered farmbuilding to the north. Complex evolution. The earliest surviving
features seen at time of survey (1987) are in the east crosswing which has a circa
early C17 roof structure but the main range may be as early or earlier, remodelled in
the later C17 and early C18. The north wing is unheated, which suggests that the
present kitchen wing, although plain in detail, may also be of a C17 date. The house
is built on a site which slopes sharply up to the north and there are massive
retaining walls to the kitchen garden at the north.
Exterior: 2 storeys. Fine symmetrical 7-bay south front with rusticated quoins and
an early C19 6-bay glazed verandah on posts. Wide C18 or early C19 front door in
centre. Complete set of late C17/early C18 high transomed windows in 2 groups of 3
with square leaded panes and iron casements complete with leaded panes and window
furniture. The crosswing, to the right, has 2 similar first floor and 2 ground floor
windows and rusticated quoins. The right (east) return of the crosswing has a
shallow projecting lateral stack. 2 ground floor 3-light late C17/early C18 windows
with square leaded panes and 2 similar first floor windows, one in a gabled dormer,
and one late C19/early C20 4-pane sash at the left ; C20 conservatory and. door to
ground floor left. A tall wall between the north end of the crosswing and a farm
building to the north has a doorway to the courtyard.
Interior: Notable interior. The passage in the main range has a circa 1700 rear
door, the left hand room is a high quality C17 parlour with ovolo-moulded stopped
crossbeams, the room has been reduced in size to the rear by a later axial partition
; C20 chimneypiece said to conceal larger, earlier fireplace. The right hand room is
an outstanding early C18 with a decorated plaster ceiling with quatrefoil ornament in
big panels ; pretty rounded window seats and panelled shutters ; C19 marble
chimneypiece. There has been some re-partioning of the first floor rooms but a door
of circa 1700 suggests that there was a large chamber of this date in the main range.
Interior of crosswing not inspected at time of survey (1987), said to be modernized
but the old list description refers to panelling and a marble chimneypiece which may
still survive. The attic storey was used for accommodation, it is still partly
floored and partitioned and was formerly plastered.
Roof: The east crosswing has pegged collar rafter roof trusses of an early C17
character (possibly crucks of some type), the collars lap-dovetailed into the
principals. The circa late C17 roof over the main range has collar rafter pegged
trusses the collars halved and pegged on to the principals. The remainder of the
house is roofed with C19 king post and strut trusses.
Tall stone rubble walls to the kitchen garden are included in the listing.
Fine exterior and interior features.