A Grade I Listed Building in Easton, Lincolnshire 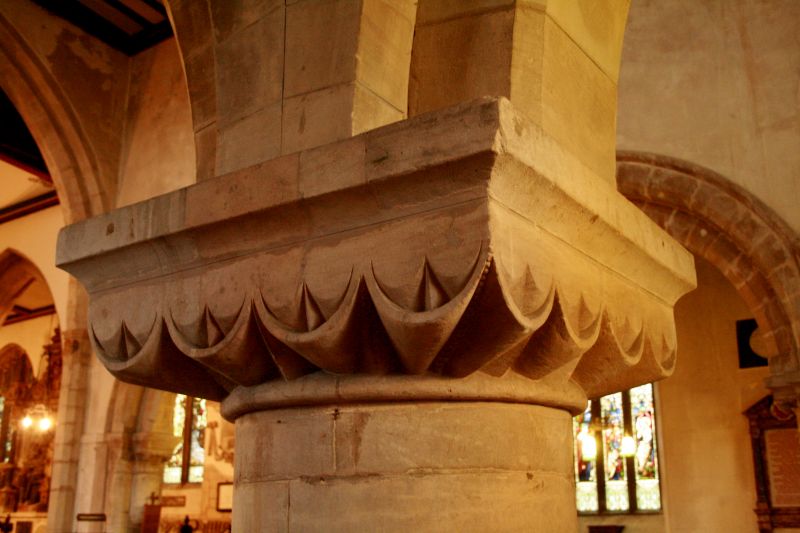 EASTON VILLAGE STREET
SK 92 NW
(south side)
Stoke Rochford
6/91
Church of St. Mary
and St. Andrew
20.9.66 (formerly listed
under Stoke
Rochford parish)
G.V. I
Parish church. Cll, C12, C13, C14, 1448, 1460-70, C19
restoration, 1936. Ashlar and coursed limestone rubble, ashlar
quoins and dressings, lead roofs. Western tower, clerestoried
nave, aisles, north and south chapels and porches, chancel. West
tower of 3 stages with billeted string course to belfry,
corbelled embattled parapet with angle pinnacles and gargoyles.
The lower parts were probably an unbuttressed Cll tower, the
belfry stage being an early C13 addition, with paired pointed
lights, octagonal shafts and round outer arches. In the side
walls are slit windows with round heads. In the west wall a 3
light early C15 window with cusps and panel tracery. Above is a
further slit window. On the north side a slender stepped C14
ashlar buttress. The west wall of the north aisle has C15 window
of 3 cusped lights with panel tracery. The C13 gabled north
porch has a single chamfered outer arch with moulded octagonal
imposts. The north C14 inner doorway has wave moulding with
hollow chamfered hood. The ashlar north aisle has 2 C19 windows
of 3 lights. The clerestory has 3 paired lights with cusped
heads and moulded hoods. Fine 1460-70 north chapel built for the
Rochford family, with moulded plinth, stepped buttresses,
pinnacles and embattled parapet. Moulded 4 centred arched
doorway with hood and 3 wide segmental headed hollow chamfered
windows of 3 lights each having moulded mullions and cusped heads
to the lights. The east wall has a central 3 light window
rebuilt 1936, and is flanked by the broad traceried windows of
the Rochford chantries. The south chapel of 1448 has moulded
plinth, stepped buttresses and pinnacled embattled parapet, in
the south wall are 2 three light windows with panel tracery and
moulded surrounds. In the south aisle wall a pair of C19
traceried 3 light windows. The C19 gabled south vestry has
single light and ogee headed doorway to west. In the west wall
of the south aisle an early C15 window with panel tracery.
Interior. The mid C12 north arcade is of 3 bays having round
piers, cushion capitals and square chamfered round arches. The
early C13 south arcade has stiff leaf capitals and single
chamfered round arches. The tower arch is C13 of 2 chamfered
orders with octagonal responds. The broad single chamfered
chancel arch has inserted capitals bearing the cypher of George
VI. In the chancel the 3 bay north arcade has C14 filleted
quatrefoil shafts with filleted abaci now supporting C15 4
centred continuously moulded arches. The south arcade is C15
with octagonal responds and chamfered arches. In the easternmost
bay is a heavy crocketed ogee arch extensively rebuilt in C19.
In the south chapel an ogee headed piscina and in the north a
pointed piscina with wave moulding. In the chancel a reredos,
1911, by Mrs. G. F. Watts, comprising central panel of
crucifixion flanked by free standing images of saints, all of
painted stone. In the north chapel a white marble reredos, of
1886 commemorating Christopher Turnor. C18 box pews in aisles,
otherwise fittings are C19 including octagonal font. The painted
font cover made by Christopher Turnor c.l900 and matches
staircase panels in Stoke Rochford Hall. 3 C18 funeral
hatchments. In the chancel a large chest. Monuments. In the
north chapel a C14 double monument, recessed into the floor in a
rectangular surround, showing a knight and his lady lying under a
blanket, he with a shield of arms, their feet resting on dogs.
Also a tomb recess with panelled tomb chest containing angels and
above a moulded arch with fleurons, crockets and finial.
Flanking the altar are 2 C15 tomb chests having cusped panelled
sides with blank shields. In the chancel are brasses to Henry
Rochford, d.l470, a small figure of a man in plate armour with
shields above. Also Oliver St.John and wife, d.l503. Small
praying figures with weepers and shields. In the south chapel a
handsome free standing monument to Henry Cholmeley, d.l641. In
the centre the couple kneel with a babe beside them. Above is a
semi-circular arch with cornice, cartouche of arms and strapwork
scrolls and top. To either side kneel sons beneath canopies
supported on Ionic columns with obelisks on the canopy. Flanking
the centre are Corinthian columns supporting the columns and
further obelisks. Extensive traces of original paint. In the
north chapel a tall reredos monument to Sir Edmund Turnor, of
1707, in black and White marble with panelled base, bolection
moulded inscription panel, set in an Ionic aedicule with broken
segmental parapet and urn. In the south wall of chapel 2 marble
wall monuments, one of 1678 and the other 1742. A further
collection of C19 wall monuments to the Turnor and Cholmeley
families.