A Grade II Listed Building in Gunby and Stainby, Lincolnshire 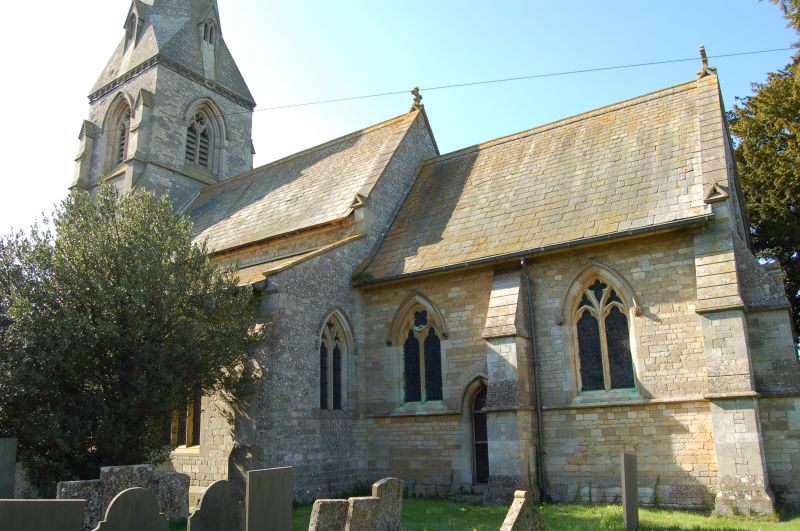 GUNBY AND STAINBY HALL LANE
SK 92 SW
Stainby
8/102 Church of St. Peter
20.9.66
G.V. II
Parish church. 1865, by R. Coad, partly re-using some C14
material in the north aisle. Squared limestone rubble, slate
roofs. Western tower, nave, aisles, chancel. The 3 stage tower
has moulded plinth, string courses, corbel table, octagonal
broach spire with single set of lucarnes to each face. Stepped
corner buttresses. To the belfry stage are 2 light louvred
openings with trefoil heads to the lights and quatrefoils over.
On the south side a small trefoil headed light to second stage.
The west doorway is in a triple chamfered pointed surround with 2
light window above. To second stage a small light as on south
side. On the north side is an octagonal stair turret. The north
aisle has a 2 light window in the west and a pair of 3 light
windows in the north side, the easternmost one being C14 with
intersecting tracery, hood mould, human and beast head stops.
The vestry has 2 trefoil headed lancets in the north and a single
lancet with trefoil over to the east. The east window is of 3
lights in a Geometric style. The south chancel wall has a pointed
doorway flanked by single 2 light windows. The east wall of the
south aisle has a 2 light window with a matching 3 light window
and similar 2 light window to the south side. In the west wall is
a further 2 light window. All tracery is in an early Decorated
style. The south doorway is in a pointed moulded surround with
hood mould and human head label stops. Interior. C14 2 bay
north arcade with single chamfered arch, circular pier with
naturalistic capital, rectangular responds with moulded imposts.
C19 2 bay south arcade, double chamfered arches, octagonal pier
and responds. C19 triple chamfered tower arch, octagonal
responds. C19 double chamfered and moulded chancel arch, semi-
circular respond and pink marble angle shafts with annular
capitals. Fittings. Fine set of carved woodwork fittings
including reredos, altar table, panelling to chancel, organ case,
choir stalls, screen, pulpit, tower screen and tall Gothic font
cover, all by Rev. W. E. Thorold, c.1880. C19 stained glass.
Painted texts over nave, chancel and tower arches. C19 font in
Early English style.