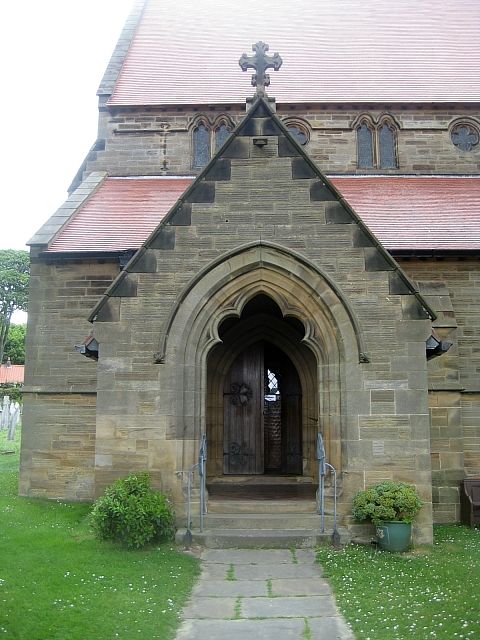 PRINCIPAL MATERIALS
Local sandstone with distinctive horizontal tooling, finely laid to courses, with quoins, copings and architectural mouldings of finely finished sandstone. Roofing of small, plain, red clay tiles with decorative ridges and stone cruciform finials except for the decorative iron cross on the chancel roof and the simpler cross on the tower roof. Iron rainwater goods including decorative covers to rainwater hoppers.

EXTERIOR
The CHANCEL apse has a high plinth and a string course at window sill level joining the five 2-light plate tracery windows that are separated by sloped gable buttresses. The organ chamber flanking the north side of the chancel has 3 lancet windows and a lean-to roof with stone coped gables. The chapel flanking the south side has a lean-to roof that is a continuation of the south aisle and a 3-light east window.

The NAVE has four 2-light plate tracery windows on the north wall linked by a string course at sill level and a continuous hoodmould. Each window is slightly different as, although the main lights are all trefoil lancets, the spandrel light above each pair is different. The western most bay of the north nave wall is windowless and has instead a sloped buttress. The west end is supported by two sloped buttresses and has a 4-light plate tracery window with a sexfoil over quatrefoils. The window has a roll moulded opening and a hoodmould with foliate stops. Above are three ventilation lancets. The south wall has a clerestory of 2-light trefoil headed windows alternated with quatrefoil roundels all under a continuous hoodmould. The nave's gables are stone coped with stone cruciform finials.

The SOUTH AISLE has a south porch with a cinqfoil moulded entrance with a hoodmould with foliate stops. To the east of the porch are 2 sloped buttresses and two 3-light trefoil windows. These windows are not aligned with the clerestory windows above. The aisle's west window is without a surround and is in the form of a pair of trefoil lancets with a trefoil roundel above.

The TOWER is attached to the easternmost bay of the south aisle. It is a very tall, 4 stage, saddleback tower. It has a plinth and a small south door with decorative strap hinges in a multi-moulded surround with a foliate stopped hoodmould. The tower has angled buttresses that nearly extend to the third stage. The second stage is marked by a string course and has tall lancets in the west and south walls with a deeply inset sexfoil roundel in the east wall, all beneath a continuous hoodmould. The third stage is shorter and again marked with string courses. This stage, forming the ringing chamber, is lit by a simple square headed lancet in each wall. The top stage, forming the bell chamber has 2-stage, 2-light plate tracery windows with internal louvers in the east and west gable walls and similar single stage windows in the north and south walls. Each is deeply set in a multi-moulded surround beneath a hoodmould with foliate stops. The eastern coped gable has a metal cruciform finial.

The gable roofed VESTRY extends east from the foot of the tower and to the south of the south chapel. It has a trefoil lancet in the south wall and a simple window without a surround in the form of a 2-stage, 2-light window with quatrefoil above. Below there is a basement door beneath a joggled lintel.

INTERIOR
The CHANCEL and apse are rib vaulted, supported by multi stage corbels linked by a string course below the windows. All the apse windows are set in moulded reveals and contain stained glass, each main light including a pictorial panel featuring a saint. The south side of the apse has an inset piscina beneath a cinqfoil arch with a hoodmould, and a pair of inset trefoil headed sedilia beneath a continuous hoodmould. A moulded and chamfered arch on the north side of the chancel leads to the former organ chamber with its patterned stained glass lancets. A matching arch leads to the south chapel. Both these arches are partly infilled with matching oak screens featuring trefoil tracery. In front are oak choir stalls with slightly more ornate stalls for clergy to their west. The chancel has a geometrically decorative tile floor featuring some bi-coloured tiles and some smaller tiles. The sanctuary also features stone blocks within the decorative scheme. There are 2 stone steps between the nave and chancel, with a further 2 steps into the sanctuary with the high altar raised on a further step. The altar table is unfixed.

The NAVE roof structure is exposed, being a scissor and collared rafter roof with a more substantial chamfered tie beam spanning between the wall plates every 8 rafters. Each tie beam supports a king post to the high collar above. The 4 bay arcade between the nave and the south aisle is formed with octagonal pillars with foliate capitals and moulded bases, the arches being simply moulded and chamfered. The chancel arch is similar. Both the north windows and the clerestory windows to the south are set in simple reveals (only the clerestory window reveals have any moulding and this is very subtle), and feature geometrically patterned clear and stained glass. The west window also features stained glass and incorporates three rows of pictorial panels in the main lights and Christ in Majesty in the sexfoil light heading the window. The lower part of the west window is partly obscured by the organ installed in 1986. Close by, on the north wall, are two distinctive bronze relief memorials, both the work of Miss Bateman, one dated to 1912 to those lost at sea. The carved oak pulpit is on the north side of the nave at the east end. Opposite, there is a rough stone, cylindrical font thought to have originated from the medieval parish church demolished in the early C19. The nave retains pitch pine pews. The floor is tiled with a geometric design employing four different colours of single coloured tiles.

The south AISLE has a double purlin roof with the purlins supported between stone half arches supported by the nave arcade. It has a tiled floor continuous with that of the nave. The western end of the aisle forms the baptistery with its square font with mouldings in the style of English Middle Pointed tracery similar to that employed for the windows. The BAPTRISTRY is lit by the west window which features pictorial stained glass 'suffer little children and forbid them not to come unto me'. Immediately to the east is the main church entrance with its oak doors on elaborate wrought iron hinges leading out to the south PORCH. The south porch has a scissor braced roof, stone side benches and a bi-coloured tiled floor. The entrance reveal is moulded and covered with a foliate stopped hoodmould. Internally there is a later storm porch that is oak panelled. To the east of the entrance, the two 3-light aisle windows have pictorial stained glass panels and associated brass memorial plates. At the east end of the aisle there is a tall arch leading to the base of the TOWER, the arch partly filled with an ornate wrought iron screen incorporating double gates. There are steps down to the base of the tower. To the south there is an exterior door, and to the east a doorway with a trefoil head to the vestry, both doors with ornate hinges. The ceiling above is cross-beamed, supported by simple corbels, and forms the floor of the ringing chamber forming the third stage of the tower. The base of the tower is lit by the stained glass windows in the second stage of the tower. The tower is reported to contain a peel of 8 bells.

At the east end of the south aisle there is an arch leading through to the south CHAPEL. This arch, which is inline with the chancel arch, is infilled with a carved oak screen with cusped tracery of slightly later style than most of the tracery in the church. This screen is dedicated as a First World War memorial. The south chapel has a door to the vestry to the south and is lit by a 3-light west window featuring stained glass with pictorial panels. The VESTRY has an exposed scissor-braced roof, pictorial stained glass windows, a shouldered doorway accessing the tower stair, the door with ornamental strap hinges, a corner placed stone fireplace and a tiled floor.

HISTORY
The parish of Fylingdales covers a large area of dispersed settlement. The original parish church (also dedicated to St Stephen) was further in-land. This was replaced by a new church built in 1868-70 sited on a greenfield site between the main concentrations of population within the parish, namely Fyling Thorpe and Robin Hood's Bay. At that time the settlement of Robin Hoods Bay was concentrated around the bay, the settlement expanded up hill to the east of the church following the opening of the railway line to Whitby and the railway station just north of the church in 1884.

The church is thought to have been completed to the full original design by GR Street. All the stained glass is attributed to Henry Holiday but was installed in stages by different manufacturers, the last probably the 'Angel of Mercy' window in the tower in circa 1907.

REASON FOR DESIGNATION
St Stephen's Church is designated at Grade II* for the following principal reasons:

* It is a complete, unaltered and characteristic design by GR Street, a nationally highly influential architect of the mid C19
* It is a highly accomplished design with a good use of space, impressive massing combined with very effective restrained ornamentation that displays a high quality of both materials and craftsmanship
* The church also contains a large number of windows by Henry Holiday, a nationally significant designer of stained glass in the late C19.