A Grade I Listed Building in Barton-le-Street, North Yorkshire 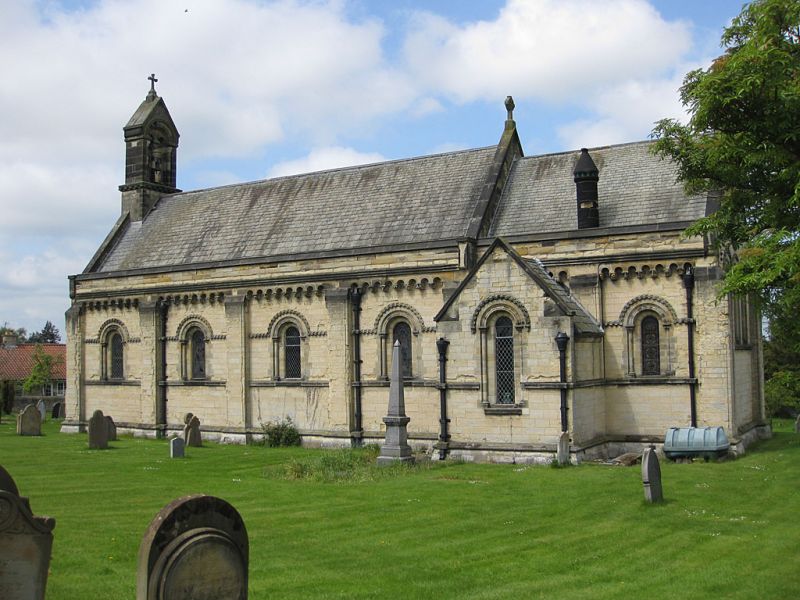 Church rebuilt in 1871 incorporating a rich, extensive and coherent decorative scheme of carved stonework from the earlier building dated to the 1160s.

Parish church. Rebuilt 1871 incorporating extensive late C12 carved stonework from the earlier church. Designed by Perkin and Son in neo-Romanesque style with stone sculpture by Charles Mawer and wood carving by William Matthews, all from Leeds.

PLAN
Nave of 4-bays with an open north porch and a bell-cote to the west gable; 2-bay chancel with a single bay vestry/organ chamber to the south.

Nave and chancel
Moulded continuous plinth. Round headed windows with a round-billet hood-mould which continues as an impost stringcourse. This, along with the continuous moulded sill band, is broken by flat buttresses which have roll-moulded angles. The capitals of the buttresses to the north and south walls are linked by corbel tables incorporating around 100 individually carved corbels: these are neo-Romanesque featuring beasts, angels, human caricatures and other forms. The west end has two windows with an oculus above and a further corbel table supporting the double arched bell-cote. The east end has three round headed lancets also with an oculus above.

South Porch
The outer doorway is thought to have originally been the church's north door. It is round arched with three rings of voussoirs, the outer being in the form of a frieze of shallow carvings of various figurative designs of Anglo-Scandinavian influence. The two inner rings consist of chevrons, the middle ring being mainly Victorian reproduction. The doorjambs have shallow, figuratively-carved panels on two faces, five of the 15 blocks being original, the remainder being high quality Victorian reproductions.

South Porch
The roof is supported by arcaded-corbel tables originally external to the chancel. These are elaborately carved with corbels in the form of heads or other figures, with additional heads set into the soffits of the arches. The spandrels to the arcades also have carved decoration. Although both corbel tables are thought to be mainly original, that to the east side includes some Victorian repair and replacement.

The church doorway was originally the medieval south door. It is round arched with two arch rings of voussoirs, both being figuratively carved. The inner ring of 11 voussoirs has a continuous vine scroll including a stag or goat in the foliage. The outer ring of 16 voussoirs consists of a collection of figurative carvings, mainly heads or beasts. The doorjambs, like those of the outer porch doorway, are figuratively carved, with 7 out of the 12 stones being original.

Placed above the doorway is a further set of figurative carvings including two stones depicting the "Adoration of the Magi" and seven stones forming part of a series depicting the "Labours of the Months". These shallow relief carvings are thought to be late C12, but have pre-conquest Anglo-Saxon stylistic features.

Nave
The wall-plates are supported by 32 individually carved corbels featuring stylised heads and beasts reused from the exterior of the C12 church nave. Other carved heads reused as stops (such as those to the carved arch ring framing the north door) also appear to be medieval, although other internal decoration such as the billet hood-moulds and nook shafts to the window reveals are Victorian. With some elements, such as the continuous running scroll frieze forming a high dado, it is difficult to separate the original C12 work from Victorian repair.

The chancel arch with its beak-head and chevron decoration is Victorian, although its design was taken from a C12 voussoir found during the rebuilding. However six of the eight elaborately carved cushion capitals supporting the chancel arch are Norman and are firmly dated stylistically to the 1160s, the two Victorian reproductions being high quality.

Chancel
Wall plates are supported by C12 arcaded-corbel tables similar to those within the porch, complete with carved heads placed in the soffits of the arches. Within the sanctuary there is a medieval piscina supported on a carved Norman pillar. The arch to the organ chamber is supported on further elaborately carved cushion capitals dated to the C12. Further C12 sculpture is believed to be concealed by the organ case.

FITTINGS and STAINED GLASS
Apart from the piscina, all are Victorian or later. The oak altar rails and pulpit are elaborately carved in Romanesque style as is the Caen stone and alabaster font. The wall panelling to dado level within the nave is gothic, as are the pews with carved end panels. The organ case is by Temple Moore and was a later addition to the church, unfortunately obscuring some more significant C12 sculpture. It is also gothic with painted and gilded decoration using a similar palette employed for the simple ring shaped candelabras within the nave. Encaustic floor tiling is by Goodwin of Hereford. Some of the windows have figurative designed stained glass, some have complex geometric designs, and some are plainer with coloured margin glazing. The stained glass to the sides of the chancel is by Barnett & Son, Leith, the east windows are by Heaton, Butler and Bayne, London. Memorials include a Romanesque tablet in the chancel to Hugo Meynell Ingram, patron of the rebuilding who died just before the new church was opened; and a First World War memorial in the nave in the form of a triptych which also lists the men who served and returned in addition to the names of the fallen.

The Doomsday book records a pre-conquest church at Barton-le-Street, thought to be the origin of the Anglo-Saxon cross base (NHLE 1316063) sited adjacent to the current church's porch. Doomsday also records that by 1089, the manor of Barton-le-Street was held by Ralph Paynel: Paynel refounded Holy Trinity Priory in York, endowing it with 12 parish churches including Barton-le-Street. Around the 1160s, a new church was constructed from stone. Although this was a simple, small church with just a nave and chancel, it was richly embellished with an extensive late Romanesque scheme of sculptural decoration. The high quality of the sculpture indicates that it was probably funded by Holy Trinity Priory or the Rector of Barton-le-Street, William D'Eu (died 1174), who was also Precentor of York Minster. In 1869-71 the church was demolished and rebuilt on the same footprint to a uniform neo-Romanesque style for the Meynell Ingrams of Temple Newsham who held the manor of Barton-le-Street. Care was taken to reuse and preserve as much of the original sculptural decoration as possible, generally with original sculpture reused internally with new sculpture employed externally.

Barton-le-Street has been cited by many authorities on Romanesque sculpture: Boase (1953, 240) states that it "must have been one of the most richly carved of the smaller churches in England"; Stone (1955, 80) highlights it as "the most splendid product of the Yorkshire School at its peak period" and Zarnecki (1953, 36) that it is the "most striking analogy between the Yorkshire School and Western France". Even Pevsner, often reserved in his praise, described the church as being "sumptuous". Recent research by Smith (2012) indicates that the original decorative scheme is nearly complete with over 250 pieces of late Romanesque sculpture (the only major missing component being the chancel arch which was rebuilt in the later Middle Ages but reconstructed on the basis of a voussoir found reused as walling stone) and that although this sculpture has been repositioned; the original positional hierarchy has been preserved. Research has also shown that much of this sculpture is without close known parallels in England: This includes the form of the door jambs and the arch rings with their figurative carvings, but also the corbel tables - the closest parallel for the inclusion of carved heads within the intervening soffits between corbels is the church of Notre Dame la Grande, in Poitiers, France.

The church of St. Michael is listed at Grade I for the following principal reasons:

* Early sculpture: For the survival of a coherent and extensive decorative scheme of C12 sculpture including a number of forms with no close parallels known in England, particularly the corbel tables with carved heads placed in the soffits between corbels, as well as the carved door jambs and figurative panels;
* Art historical: Particularly for the high quality of the figurative sculpture which is both technically accomplished and iconographically complex, shedding light on the mixing of Anglo-Scandinavian, Anglo-Saxon and French artistic traditions in C12 Yorkshire;
* Victorian craftsmanship: Particularly for the high quality C12 style stone sculpture by Charles Mawer. The wood carving by William Matthews is also of high quality but perhaps more conventional for its date.