A Grade I Listed Building in Rillington, Malton, North Yorkshire 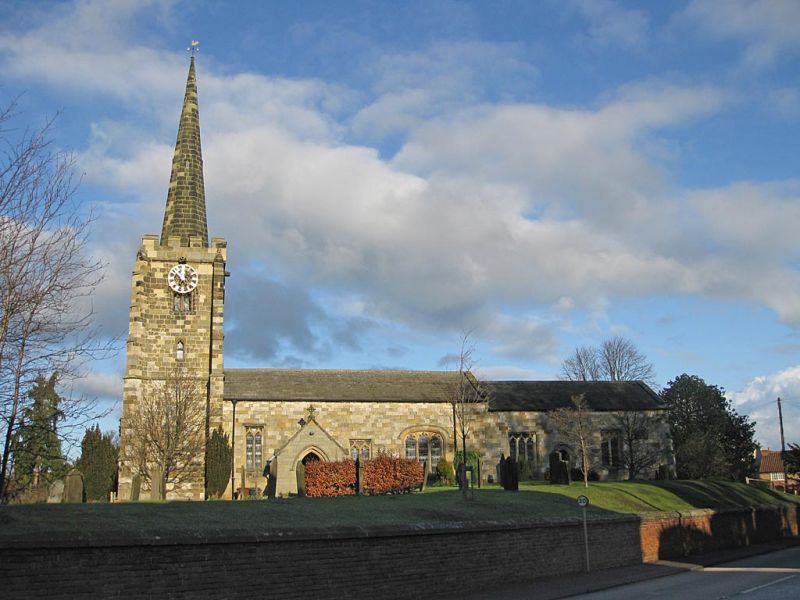 GV I
Church. C12 and C13 chancel and arcade with C15 tower; restoration by
C Hodgson Fowler 1884-5; south porch c1920. Dressed sandstone and Hildenley
limestone with Westmorland slate roof to nave and blue Welsh slate roof to
chancel. West tower; 4-bay nave and north aisle; south porch; chancel with
north chapel, now vestry. 3-stage, embattled tower on chamfered plinth has
buttresses with offsets. To the west is a 2-light, trefoil-headed window
with panel tracery to lowest stage. North and south faces have single
lights to second stage. 2-light bell openings with panel tracery, partly
covered by clock faces, beneath pointed hood-moulds. Recessed needle spire.
The nave has a gabled south porch containing a chamfered doorway beneath a
C13 pointed hood-mould with head stops. The 2- and 3-light windows were
rebuilt in the C19 restoration. The north side, on chamfered plinth,
retains 2 original 2-light, trefoil-headed windows in chamfered square-
headed surrounds. The chancel, on chamfered plinth, has a pointed priest's
door with hood-mould, and 2- and 3-light, trefoil-headed windows in
chamfered, square-headed surrounds. Dwarf buttress with offsets to east,
with a wall tablet to Matthew Pape (d1788) to left. The east window is of 3
lights with cinquefoil heads and panel tracery beneath hood-mould with head
and foliate stops. To the north is the 2-light window to the former chapel
beneath a pointed hood-mould with dogtooth moulding. Interior: C12 responds
to C15 chancel arch with imposts from which C14 fleurons and cablemoulding
have been carved. Former north chapel has C12 semicircular responds with
scalloped capitals and C15 pointed, double-chamfered arch. Arcade, c1200,
of double-chamfered round arches on cylindrical piers with finely moulded
capitals with head stops. The east respond has a stiff leaf capital and on
the north side an earlier plain impost, chamfered on the lower edge. The
C15 tower arch is pointed and of 2 orders, the inner one chamfered and
corbelled. On the north side of eastern respond to the arcade are
substantial remains of a C13 wall painting depicting the foundation of the
church and the institution of its first priest, Robert de Okham, c1250.
Further traces of colour are visible beneath the window of the chapel, in
which the piscina survives in the east repond to the arch. C13 octagonal
font with blind arcading.