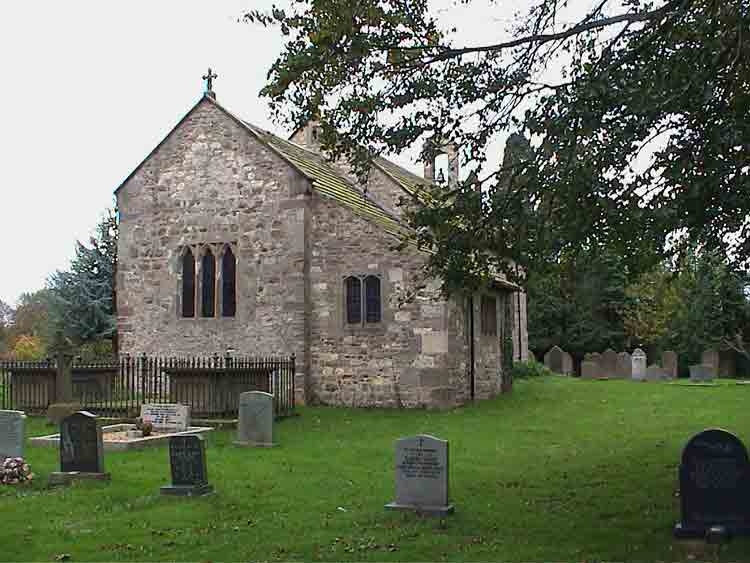 Church. C12 and C18, restored 1889 for the Rev Henry Kinnear and 1896-97 -
for the Bridgemans of Copgrove Hall (qv). Limestone rubble with ashlar
dressings, graduated stone slate roof. Quoins; deep ashlar plinth to nave.
3-bay nave with west bellcote and a timber-framed porch to bay 1; 2-bay
chancel with vestry on north. Board door to nave; nave north and south
windows are pointed, of 2 lights and have Perpendicular style tracery,
1896. Narrow C12 round-arched window to chancel, right, 2-light Decorated
window with hoodmould to left. Square-headed east window of 3 cusped
lights. Ashlar gable copings; bellcote with one bell in an open segmental
arch surmounted by a moulded pediment. A stone forming a quoin of the
vestry was originally in the north chancel wall. It is carved with a
T-shape (?Thor's hammer) and a figure with sword and shield, possibly pre-
Christian. Interior: the rebates to the east window are plastered and
retain red painted lines in imitation of ashlar, and painted scrolls.
Norman chancel arch with imposts carved with chevron and dogtooth motifs,
the left restored. C17 and C18 box-pews reused to line nave walls; the
medieval altar stone rediscovered at the late C19 restoration; a brass
inscription near the south door is dated 1637. Board painted with the Royal
Arms of Queen Anne over those of Charles II. Many fine late C18-C19 wall
memorials to the Duncombe family of Copgrove Hall. The church belonged to
the Knights Hospitallers in the C13, and from 1535 to c1634 the living
belonged to the Wyse family. The church is thought to have had a tower and
short steeple, removed in the late C17 when the bellcote was added. In the
C18 the nave windows were round-headed, they were rebuilt in Gothic style in
1896-97. At the same time the roof was renewed, the eaves being raised
considerably; the pulpit, choir stalls and pews were altered at that time,
and the floor lowered. The vestry and porch were also added.