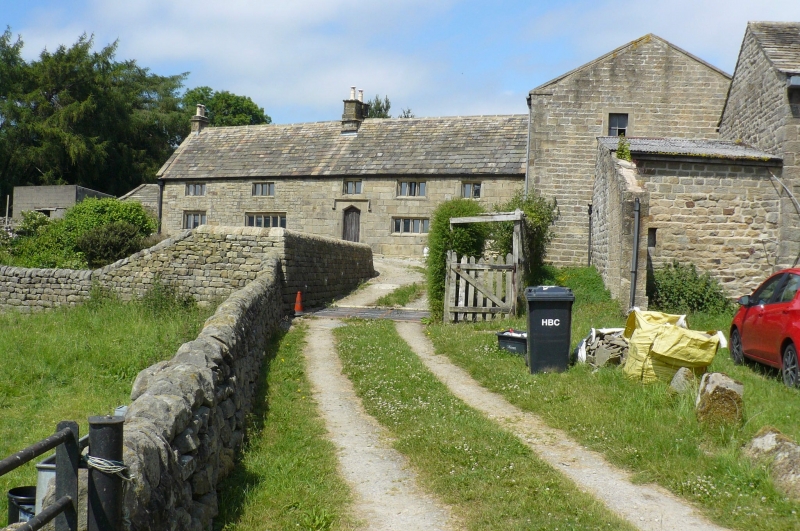 House. C16 and C17 with early C19 addition and alteration and C20
restoration. Timber framing encased in coursed squared gritstone with
graduated stone slate roof to west end and large squared gritstone blocks to
east end which is roofless at time of resurvey. 2 storys and 5 bays, 3
right-hand bays in ashlar blocks, 2 left-hand ones in poorer quality stone.
Facade: pointed-arched doorway with chamfered quoined jambs and hoodmould,
centre. 3- and 5-light recessed and chamfered mullion windows to ground
floor left, 2 similar 3-light windows above. Recessed and cavetto-moulded
mullion windows to right and above the door: of 4 and 2-lights to ground
floor, of 2, 3 and 2-lights above. Hollow-moulded gable coping and corniced
stack to left, remains of similar coping to right. Large stack with
battlemented crest straddles the ridge to left of the door; large corniced
stack far right. Rear: the roofless portion has a doorway to left and a 3-
light mullion window to right in the rear outshut. Centre (roofed): a C19
outshut left; right: the main wall has a former 3- now 2-light cavetto-
moulded mullion window left, and an inserted 2-light window to right. A 2-
light mullion window to first floor. Left return: the gable wall is built
to water-shot courses. Right return: chamfered plinth, 2-light cavetto-
moulded window to right (mullion missing) with a projecting stone sink to
left, between window and chimney stack. Interior. 5 or more bay timber-
framed building with rear aisle preserved in the cross-walls and roof
trusses of the C17 building. Truss 1, between bays 1 and 2 has jowelled
principal posts on padstones supporting a cambered tie beam and a king-post
roof-truss infilled with paired diagonal struts parallel to the principal
rafters. The 2 tiers of trenched purlins and ridge piece are restored. A
stud partition with wattle and daub infill below the tie beam is supported
by a beam below the present ground-floor ceiling level which has a diagonal
groove on the west side indicating a former stair position. Truss 2 is on
the line of the change in masonry on the-front wall; the front post is
visible and the end of a horizontal timber is tenoned into it. This timber
was sawn off when the massive mantel beam was inserted and the stone stack
constructed. The stud partition and roof truss at first-floor level are
smoke blackened on the west face and the stepped stack is built within the
former smoke bay. On the ground floor a wattle and daub screen is built
above the mantel beam level, inside the chimney cavity, possibly the remains
of a wattle and daub firehood, or forming a side flue to an oven. A stone-
lined cupboard with early C18 wooden-framed door, now occupies the probable
oven position. Roof trusses 3 and 4 dismantled at the time of resurvey, but
said to have been similar to nos 1 and 2. The framing of the rear aisle
survives at the east end of the building: 2 principal posts with slightly
curved braces carry the aisle plate; the rear right post has a less
substantial brace similar to a jetty bracket. The massive east stack was
built against this truss; the fireplace having a wide segmental arch flanked
by ovens. During restoration the following features were noted: the
underside of the wall plates had mortice and peg holes indicating the
position of studs and window bars; the windows in the stone building follow
the pattern of the earlier fenestration. The wall plates were composed of 2
lengths of timber linked with an edge-halved and stop-splayed joint. The
rear aisle continued across the position of the present C19 rear outshut but
did not continue to present west gable line. Scow Hall (spelt Scough) was
occupied in the later C16 by John Beckwith. In 1596 John Brierey was the
owner, his memorial (qv) is in Fewston churchyard. John Brierey died in
1613 and Mary Brierey, probably his daughter, married Charles Fairfax of
Menston in 1625. Sir Ferdinando Fairfax was living at Scow in 1612 and his
children were born there in 1613, 1614 and 1616, amongst them Thomas, second
Lord Fairfax, Cromwell's second in command, whose main home was Denton Hall
(qv). In 1715 William Wilkinson became the new owner and in 1733 it passed
by marriage to the Fawkes family of Farnley Hall (qv). The house was
tenanted for most of the C18 and C19, fell into decay in C20 and was used as
a farmbuilding until the present owner undertook acomplete restoration
which is still in progress at the time of resurvey. E Bogg, Higher
Wharfeland, 1904, p 72. Ann Skelton - personal communication.